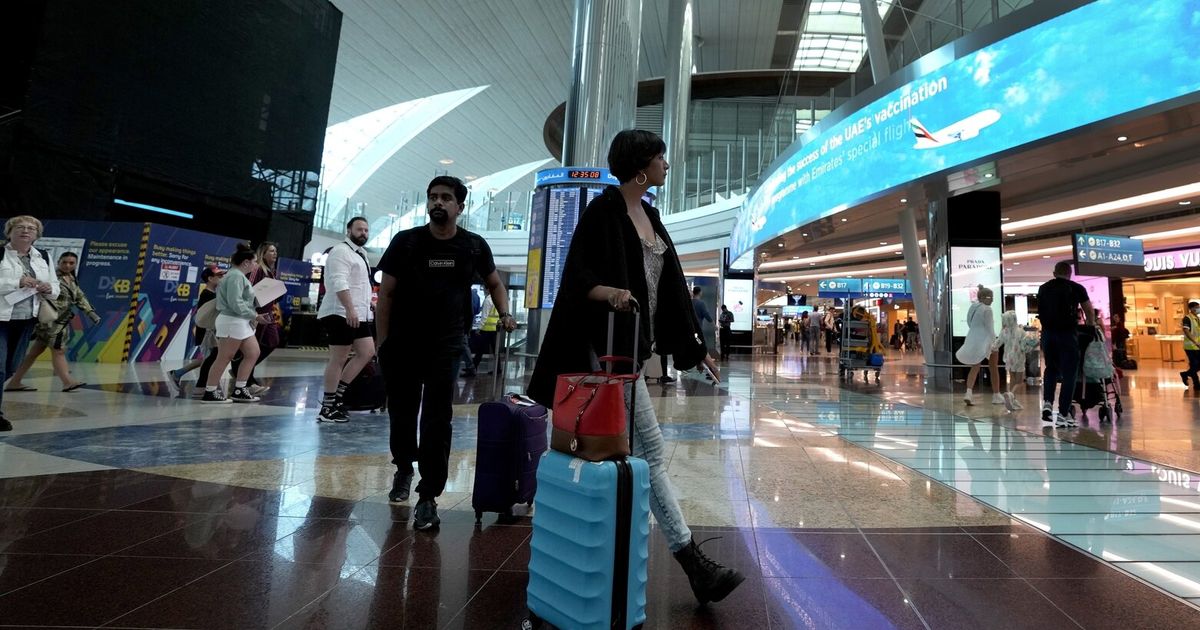 DOHA, Qatar (AP) — Travel at this World Cup was supposed to be easy in the tiny host nation of Qatar, after fans had to take long flights between cities at the last three tournaments.

The eight stadiums in Qatar are in or near the capital, so fans don’t have to go too far to get to matches — in theory. The country billed its World Cup as environmentally sustainable in part because of how compact it is, but the reality is quite different.

Tens of thousands of foreign fans are turning to shuttle flights between Doha and neighboring Dubai for a number of reasons — high hotel prices, a scarcity of accommodation and alcohol limits.

It might sound extreme, expensive and environmentally questionable, but the daily flights have become a popular choice as fans opt to sleep somewhere other than Qatar.

Dubai, the freewheeling commercial capital of the United Arab Emirates, is the region’s top destination outside Doha. State airlines like FlyDubai, the emirate’s budget carrier, are marshaling resources, operating 10 times the number of usual flights to Doha.

The concept of air shuttles isn’t new to the Gulf, where many who live and work in ultraconservative Saudi Arabia or dry Kuwait hop over to Dubai for the weekend to drink freely and have fun in the glittering metropolis.

Unlike fans who had to take long-distance flights at the World Cups in South Africa (2010), Brazil (2014) and Russia (2018), the Dubai-Doha route is shorter in most cases.

But short flights, often defined as trips shorter than 500 kilometers (311 miles), are more polluting than long ones per person for every kilometer traveled because of how much fuel is used for take off and landing.

More than a dozen World Cup fans interviewed Thursday who chose to stay in neighboring countries said it came down to cost. Many couldn’t find an affordable place to sleep in Doha, or any place at all. As hotel prices soared in the months leading up to the tournament, frugal fans scrambled for spots in Qatar’s far-flung fan villages filled with canvas tents or shipping containers.

“We wanted to stay for five days in Doha. But it was too expensive. We didn’t want those weird fan zones,” said Ana Santos, a Brazilian fan arriving at Doha’s airport on Thursday with her husband.

“In Dubai, we found a fancy hotel for not too much money. … The flights are so crowded so we’re not the only ones.”

After eight years of lying idle, Doha’s former airport is back to life as thousands of shuttle flight passengers squeeze through its halls. On Thursday, Qataris in traditional dress passed out juicy dates and Arabic coffee to arriving fans who cheered and snapped photos while draped in their national flags.

Other fans on shuttle flights were turned off by Qatar’s alcohol restrictions. The city’s few hotels are almost the only places allowed to serve alcohol, after a last-minute ban on beer in stadiums. Doha’s sole liquor store is open only to Qatari residents with an official permit.

Meanwhile Dubai’s pulsing nightclubs, pubs, bars and other tourist spots are awash with spirits — and at lower prices than in Doha, where a single beer goes for $14 at the official fan festival. Even in Abu Dhabi, the United Arab Emirates’ more conservative capital, tourists can buy alcohol at liquor stores without a license.

“We want to have a Dubai experience. That’s more interesting for us,” said Bernard Boatengh Duah, a doctor from western Ghana who bought an all-inclusive Dubai hotel package that gives him match-day flights, as well as unlimited food and alcohol. “We wanted more freedom.”

Many fans described the shuttles as a fairly seamless process — arriving at the Dubai airport less than an hour before takeoff, zipping through lines without luggage and flying for about 50 minutes before landing in Doha just in time for their game.

But others found it stressful and draining.

“These are long days. It’s exhausting,” said Steven Carroll, a lab technician from Wales, whose flight back to Dubai was delayed an hour, returning him to his Dubai hotel worn-out at 4.am after a 24-hour day.

“The problem is you have to arrive in Qatar a good while before the match and you have to allow even more time to go through the airport.”

Fernando Moya, a 65-year-old Ecuador fan from New York, said he regretted flying in from Abu Dhabi. A technical problem with his friends’ Hayya cards, which act as Qatar entry visas, stranded his companions in the UAE capital.

Moya spent his Thursday speaking to customer service at the Doha airport and shelled out nearly $2,000 to fly them over on a new flight.

“The logistics of this whole system are very complicated for people,” he said.

The airport on Thursday was teeming with fans from Saudi Arabia, whose citizens have bought more World Cup tickets than any other nationality after Qatar and the Untied States. The Saudi team’s shock victory over Argentina this week stoked even more excitement.

Riyadh, an aspiring tourism destination, has sought to benefit from the regional boost, offering those with Hayya cards two-month visas to the kingdom. Saudi student Nawaf Mohammed said World Cup fever in Riyadh is palpable, with more Westerners visible in the capital’s airport and carnivals.

The prospect of shuttle flights from the UAE or Saudi Arabia would have been unthinkable mere years ago. In 2017, the two Gulf Arab states, along with Bahrain and Egypt, imposed a boycott on energy-rich Qatar, cutting off trade and travel links over the emirate’s support for political Islam and ties with Iran. Qatar refused to back down and the embargo ended last year.

Even so, tension linger. Bahrain, just a 45-minute flight from Doha, continues to squabble over politics and maritime borders with Qatar. Fans sleeping in the island kingdom enjoy no such easy flights.

Eyad Mohammed, who chose to stay at a beach in Bahrain, had a layover in eastern Saudi Arabia on Thursday.

“This region is not always convenient,” he said.