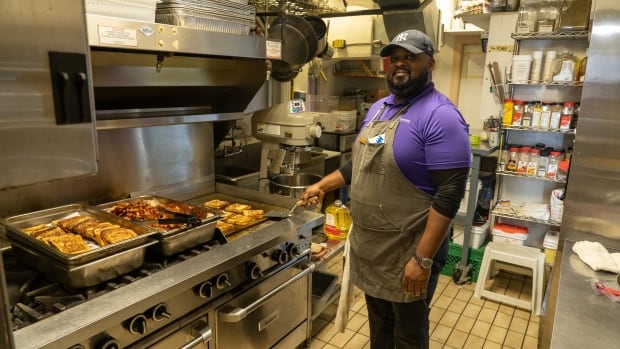 The shelter says the basket of ingredients it uses for budgeting has increased in cost by 18 per cent since January due to inflation. That’s pushed the meal program over budget and is frustrating the shelter’s efforts to serve more hot meals.

“Vegetables, meats, fresh produce — anything that’s grown is hard to get,” Lyttle said.

Lyttle prepares a variety of homemade meals to provide comfort and nutrition to residents at one of Cornerstone’s shelters. There shelter currently offers three daily meals and an evening snack to the about 100 people at its two facilities.

“It’s not less meals, but we do have to get creative with what we do,” Lyttle said.

He said that can involve adding chicken stock to their homemade macaroni and cheese sauce to stretch it a little further.

The higher cost of individual items such as lettuce and bread mean it’s more expensive to prepare certain dishes like sandwiches and salads, according to Paul Skinner, the shelter’s food services manager.

“Bread has almost doubled in cost since January,” Paul Skinner said. “That really impacts on our food budget when we don’t have a huge budget to begin with.”

Skinner said they’re currently $1.50 over budget per resident per day. He said there are no signs costs will drop soon, especially given the added expense of importing produce during the winter, and fuel surcharges on deliveries.

A recent study by Ottawa Public Health said the cost of feeding a family of four in the capital rose more than 20 per cent, exceeding $1,000 a month during the pandemic.

The report found that for people living on Ontario Works or the Ontario Disability Support Program, buying fresh fruit and vegetables could mean going into debt.

Cornerstone has set a fundraising goal of $40,000 for Giving Tuesday, with the aim of covering the higher costs of the food program and increasing the number of hot meals served.