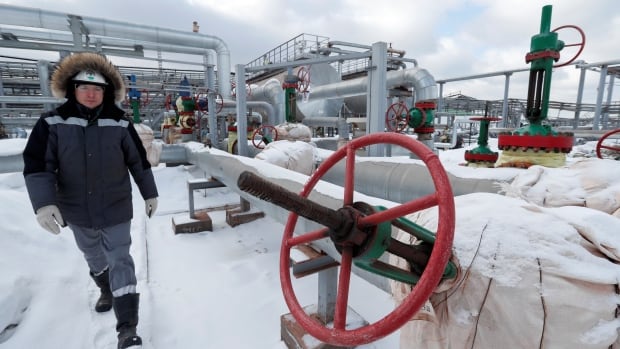 The office of Ukrainian President Volodymyr Zelenskyy on Saturday called for a lower price cap on Russian oil than the one agreed to by Ukraine’s Western supporters, while Russian authorities called the cap of $60 US per barrel harmful to free, stable markets.

Andriy Yermak, the head of Zelenskyy’s office, wrote on social media that the price ceiling set by the European Union, Australia, Britain, Canada, Japan and the United States on Friday didn’t go far enough. The cap on crude oil is set to take effect on Monday, along with an EU embargo on Russian oil shipped by sea.

“It would be necessary to lower it to $30 in order to destroy the enemy’s economy faster,” Yermak wrote on the Telegram messaging service, striking out a position also favored by Poland — a leading critic of Russian President Vladimir Putin’s war in Ukraine.

The Russian Embassy in Washington insisted that Russian oil “will continue to be in demand” and criticized the price limit as “reshaping the basic principles of the functioning of free markets.”

A post on the embassy’s Telegram channel predicted the per-barrel cap would lead to “a widespread increase in uncertainty and higher costs for consumers of raw materials.”

‘Europe will live without Russian oil’

Russia has repeatedly said it will not supply oil to countries that implement the cap — a stance reaffirmed by Mikhail Ulyanov, its ambassador to international organizations in Vienna, in posts on social media.

“Starting from this year Europe will live without Russian oil,” he said.

The price cap aims to put an economic squeeze on Russia and further crimp its ability to finance a war that has killed an untold number of civilians and fighters, driven millions of Ukrainians from their homes and weighed on the world economy for more than nine months.

The General Staff of the Ukrainian Armed Forces reported that since Friday, Russia’s forces had fired five missiles, carried out 27 airstrikes and launched 44 shelling attacks against Ukraine’s military positions and civilian infrastructure.

Kyrylo Tymoshenko, the deputy head of the president’s office, said the attacks killed one civilian and wounded four others in Eastern Ukraine’s Donetsk region. According to Britain’s Defense Ministry, Russian forces “continue to invest a large element of their overall military effort and firepower” around the small Donetsk city of Bakhmut, which they have spent weeks trying to capture.

In southern Ukraine’s Kherson province, whose capital city of the same name was liberated by Ukrainian forces three weeks ago following a Russian retreat, Gov. Yaroslav Yanushkevich said evacuations of civilians stuck in Russian-held territory across the Dnipro River would resume temporarily.

Russian forces pulled back to the river’s eastern bank last month. Yanushkevich said a ban on crossing the waterway would be lifted during daylight hours for three days for Ukrainian citizens who “did not have time to leave the temporarily occupied territory.” His announcement cited a “possible intensification of hostilities in this area.”

Kherson is one of four regions that Putin illegally annexed in September and vowed to defend as Russian territory. From their new positions, Russian troops have regularly shelled Kherson city and nearby infrastructure in recent days, leaving many residents without power. Running water remained unavailable in much of the city.

The other regions annexed in violation of international law are Donetsk, Luhansk and Zaporizhzhia.

The mayor of the northeastern city of Kharkiv, said some 500 apartment buildings were damaged beyond repair, and nearly 220 schools and kindergartens were damaged or destroyed. He estimated the cost of the damage at $9 billion US.