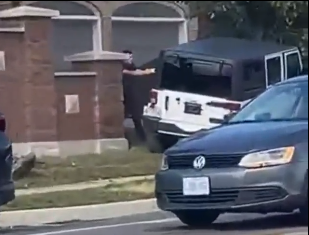 It looked like something out of a Fast and Furious movie.

Or maybe one of those viral videos you see from the streets of Los Angeles.

But this was Brampton.

And it got close to seeing people hurt or worse.

Video taken Thursday around 3:15 pm and posted on Twitter by 6ixBuzzTV shows two Peel Regional Police officers trying to apprehend the driver of a white Jeep — who clearly was not thrilled about being arrested — on Chinguacousy Rd. The driver drove up on the lawn of a home and even over a tree — narrowly missing officers who were adeptly trying to deploy stop-vehicle equipment.

But this driver put the Jeep into reverse and then banged into a light standard before smashing into several cars.

For a second it looked like the driver would get away, but with special equipment seen protruding from the front of a vehicle and numerous Peel cruisers racing in for back up, he was arrested at the scene.

“Fortunately, no one was hurt,” said Deputy Chief Nick Milinovich.

So many could have been.

Yudhbir Randhawa, 31, of St. Constant, Que., who cops say “has a criminal history which includes convictions for dangerous operation of a motor vehicle, flight from police and drug-related offenses” was taken to hospital for assessment and cleared medically .

Randhawa’s two passengers — 41-year-old Harpreet Saggu of Brampton and 23-year-old Jashanpreet Singh of Lasalle, Que. — also were arrested on drug-related charges and both released on an undertaking.

When you watch this video, you can’t help but come to the conclusion that the outcome could have been far worse. We already buried two police officers this week in the GTA and one movement to the left or right and this Jeep could have easily run over an officer or a member of the public.

While this is great footage, it’s not a movie.

It’s more evidence of how dangerous things have become in today’s world and offers a fine example of the courageous work police officers undertake out there each and every day.