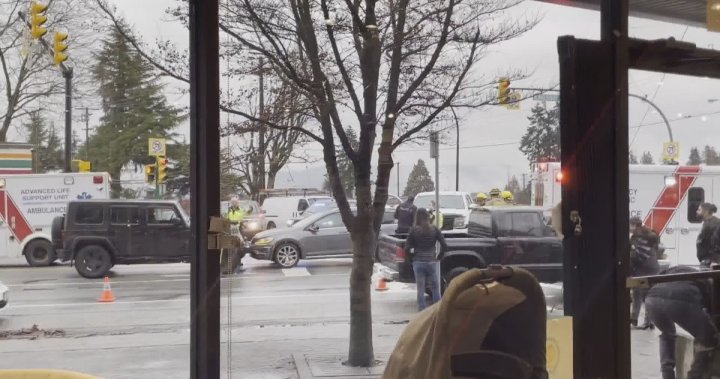 Three senior Vancouver police officers are facing a code of conduct investigation over allegations they tried to interfere in a crash investigation earlier this month.

Global News first reported the incident, which took place last Tuesday afternoon, while a group of female officers were taking part in an off-duty training event in Burnaby.


The incident began while one of the officers was involved in a collision while allegedly making an illegal left-hand turn at Royal Oak Avenue and Kingsway.

Minutes later, a Burnaby RCMP traffic officer was on scene investigating. Several VPD members, who had been part of the training session nearby, arrived shortly afterward.

“My understanding is they were all of duty and we’re doing a review of the situation,” Vancouver Police Chief Adam Palmer told Global News two days after the incident, adding that, “it’s a very emotional situation anytime somebody has been injured in a car accident and emotions run high.

“We have to get the facts and find out what happened. Based on what I’ve heard, (I’m) not that concerned.”

1:51
‘My job has already been threatened’: Vancouver Police chief weighs in on interference allegations


That level of concern seems to have changed, as Global News has learned three senior officers, two inspectors and one superintendent, have been re-assigned under section 110 of the Police Act.

The Office of the Police Complaint Commissioner confirmed Wednesday that it would be initiating a Police Act investigation into the matter at the request of the VPD.

“This will include the appointment of an external investigating agency and discipline authority which will be identified in due course,” the office said in a statement.

Vancouver city councilor Pete Fry said he was pleased to see an outside investigator was looking at the file.

“There are reasons to be concerned and I think, given the allegations and the perception about a possible misuse of power, I think it’s an important investigation,” he said.

Key in the investigation could be video from the RCMP officer’s body camera, which sources told Global News captured the entire incident.

Burnaby RCMP have declined to confirm that, saying the investigation is ongoing.