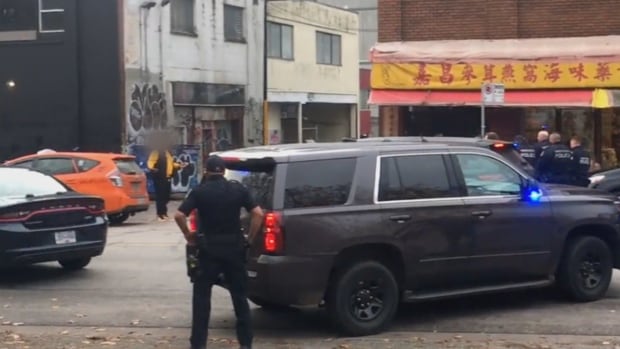 A video shared on social media Thursday afternoon shows Vancouver police in the Downtown Eastside surround a man who falls to the ground after shots ring out. Moments later, a dog appears to be attacking the man.

In a statement to CBC Thursday evening, the Vancouver Police Department (VPD) said officers used a beanbag gun on the suspect, and that they used “lawful, measured, and appropriate use of force.”

They said officers saw the man standing near the entrance to the Vancouver Area Network of Drug Users (VANDU) building on East Hastings Street in the Downtown Eastside, and tried to arrest him for an unrelated crime.

“The man in this video is a high-risk and violent offender with a history of armed robberies, assaulting police, and drug trafficking,” reads the statement, which goes on to say the man assaulted a VPD officer in March 2021.

Cait Spence, community organizer with Our Streets — a VANDU initiative — says she witnessed what happened and that police could have de-escalated the situation.

A video shared on social media shows VPD officers shooting a man with beanbag rounds, and using a police dog to restrain him.

She says she happened to be meeting with other community advocates across the street from where the incident took place.

“First I saw about seven or so police officers trying to detain someone who was in the back a of a cab,” she told CBC in an interview.

“The person who they were attempting to detain left the cab … put his hands up, put his hands on the cab and was showing signs of surrender.”

She says the man wasn’t given immediate access to medical care.

Police have previously described beanbag shotguns “a safe and effective less-lethal tool” and “used as an alternative to lethal force and can be deployed against a person who is acting violently or displaying assaultive behaviour.”

In their statement, VPD said the man got into a taxi and ordered the cabbie to drive, allegedly threatening to kill the driver if he stopped.

They said they forced the taxi to a stop near Gore and Keefer Streets, where the cab driver fled.

The suspect stayed in the cab, then stepped out and confronted officers. They said the suspect did not comply with orders to lay on the ground.

In the video, the man can be heard telling police to shoot him.

Police said an officer shot the suspect using a beanbag gun when the suspect “turned away and motioned back toward the rear door of the taxi.”

According to police, the man resisted arrest after falling to the ground, and a police dog was released “to gain full control so the man could be handcuffed.”

Police said the suspect, who remains in custody, was treated for the dog bites and is set to face “multiple new charges.”

The incident is the latest in a number of violent altercations involving Vancouver police. In October, 42-year-old Ojibway man Chris Amyotte died after police shot him with beanbag rounds.

As part of her work with Our Streets, Spence has been involved in a campaign, partnering with the City of Vancouver to empower people living in tents on the Downtown Eastside to take care of their neighbors and keep each other safe.

She says regularly seeing violent arrests and open use of force by police makes everyone in the neighborhood feel uncomfortable.

“The way that people talk about it is, ‘Any interaction with a cop can lead to that,'” she said.

“It makes people afraid and it lets people know that this neighborhood is ultimately run by the police.”

Spence says she’s gotten into the habit of filming police when she sees a situation involving officers that looks like it’s starting to escalate.

She says she felt police had an opportunity to de-escalate the incident on Thursday when the man had his hands in the air, and that she took out her phone to record when she saw more officers arrive on the scene.

Police say British Columbia’s Independent Investigation Office (IIO), which is called to investigate any police interaction that leads to death or serious harm, will be notified.