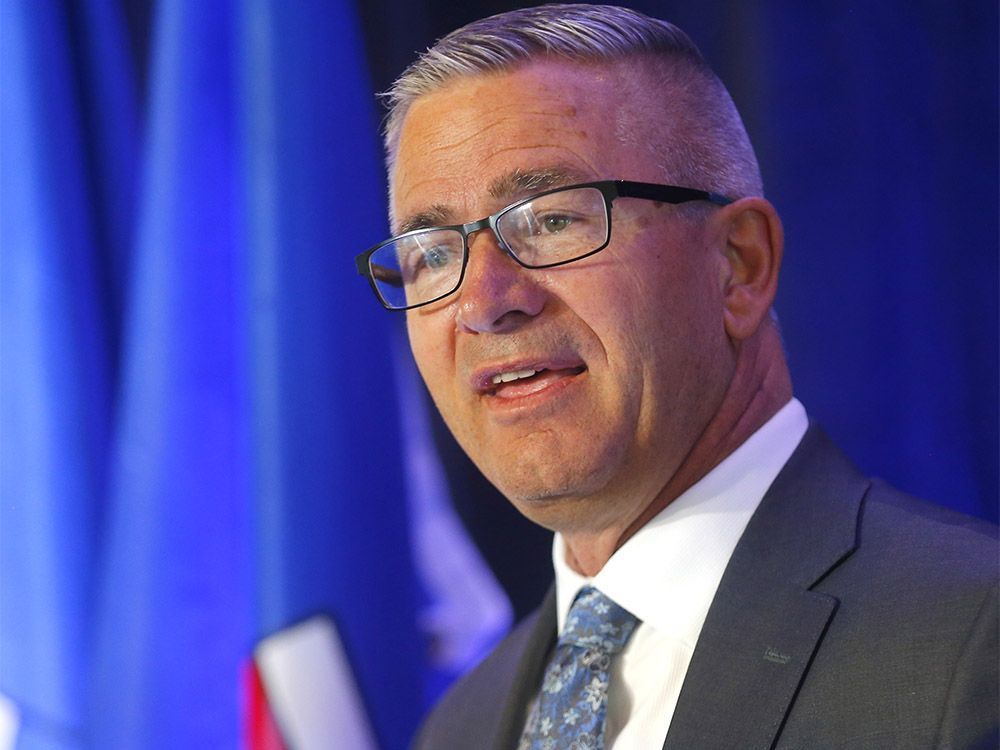 There are so many risks confronting Alberta’s economic recovery today, you might need a spreadsheet to track them.

What would happen if oil prices continued their recent downward slide and averaged just US$55 per barrel next year? Would it stop Alberta’s economic growth and spark a recession?

According to the province’s mid-year fiscal update, the answer is no.

The second-quarter report released Thursday by Finance Minister Travis Toews indicates a large surplus for this year, but highlights some of the potential dangers ahead. The hefty economic expansion for 2022 is expected to moderate next year.

This year’s budget surplus is now pegged at $12.3 billion, down nearly $1 billion from August’s update, due to lower commodity prices.

Next year, the surplus is forecast to drop by more than half to $5.6 billion, but still at a significant level. The government projects a $7.3-billion drop in total forecast revenues in 2023, with energy royalties tumbling from record heights of $28 billion this year to $19.2 billion.

Despite these speed bumps, the government forecasts gross domestic product (GDP) increasing by 4.8 per cent this year, and slowing to 2.7 per cent in ’23.

During a news conference, Toews acknowledged a deep, prolonged global recession would affect energy prices, but said he doesn’t see a downturn ahead for the province.

“Many economists are predicting that Canada will experience a couple of quarters of economic contraction in 2023 — and we’re certainly not predicting that for Alberta; our energy industry is getting its legs under it,” he said. 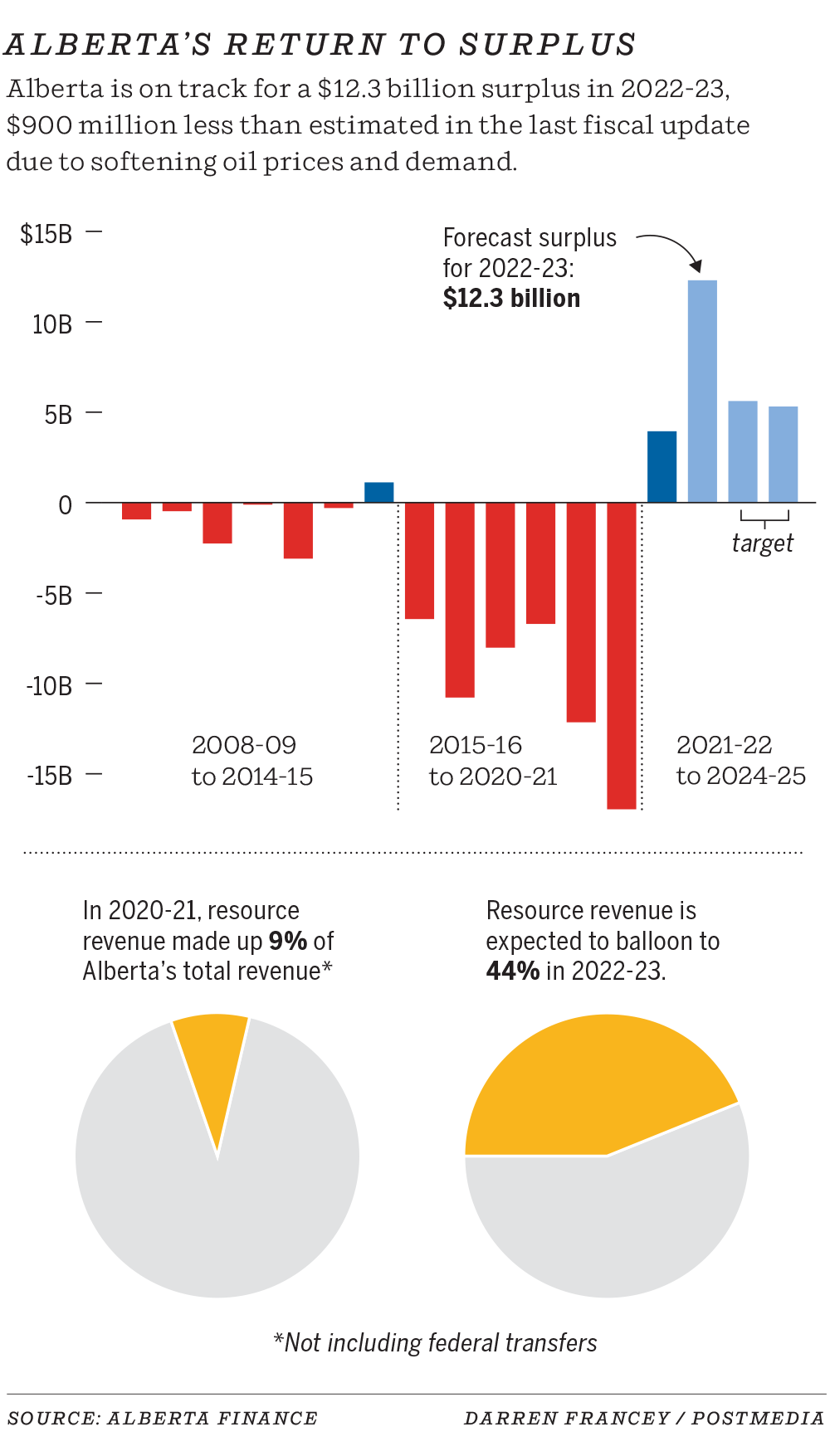 As with most budget updates, one of the key numbers to scrutinize is the forecast for oil prices, as it drives much of the royalty revenue.

The government projects benchmark oil prices will average US$91.50 per barrel for the current budget year that ends in March, more than $10 above current levels, as prices closed Thursday near $78 a barrel.

That seems reasonable enough. Projections from more than a dozen private banks, industry analysts and forecasting firms range from a low of $75 a barrel to a high of $105, with an average of $88.

Yet, geopolitical tensions and economic factors can swiftly sidetrack any outlook.

If energy demand hits the skids in 2023 and oil averages just $55 a barrel next year, Alberta’s economy wouldn’t go into a ditch, according to the outlook. Under the low-price scenario included in the report, the economy would still grow at 1.2 per cent in 2023.

Now, it wouldn’t be a pain-free situation, with less job growth, while provincial tax and resource revenues would tumble by about $13.9 billion.

“Alberta is in a far better position than other provinces to withstand an economic slowdown,” said Mike Holden, chief economist of the Business Council of Alberta.

“I have a little concern that those (provincial) growth rates might end up being a little optimistic, simply because we are dealing with such a volatile situation.”

Provincial officials note private-sector investment is expected to continue flowing into both energy and non-energy projects next year. There’s a series of developments now moving ahead, such as petrochemical complexes, wind and solar farms, and manufacturing facilities.

The population is also expected to keep growing, up by 2.2 per cent next year. The housing market in Alberta “is faring much better compared with the rest of the country, buoyed by solid migration and low inventories,” the update states.

A recent forecast by Desjardins indicates Canada’s economy will enter mild recession in the first half of next year, but it expects Alberta will see a modest 0.5 per cent expansion in 2023.

“This is a good update for Alberta, in the sense that the fiscal numbers speak for themselves,” Desjardins economist Marc Desormeaux said in an interview.

“But downside risks are not to be overlooked at this particular point where there’s uncertainty about where the course of the global economy is going.”

Under the province’s base case outlook, employment next year is expected to expand by 2.4 per cent in 2023, while the unemployment rate will increase to six per cent.

Non-energy investment is anticipated to grow by about nine per cent. Capital spending in the oil and gas sector is projected to climb by $5.9 billion, or 18 per cent.

Petroleum producers are expected to increase drilling and production — which hit a record of 3.9 million barrels per day in September — ahead of the Trans Mountain pipeline expansion being completed late next year.

Of the 111 oilsands projects in the province, 63 have now moved into the higher “post-payout” category, elevating them into paying higher royalty rates once their capital costs are recovered.

The growing price differential between WTI crude and Western Canadian Select heavy oil is one area of ​​concern and is expected to average almost $20 a barrel this year, about $5.50 above budget.

Inflation is another wild card and is expected to average 6.3 per cent this year, slowing to 3.3 per cent in 2023. The province is also seeing a slowdown in retail sales for big-ticket items, but momentum is largely continuing.

This doesn’t mean Alberta is fully protected from the economic storm clouds. Memories of a deep recession in 2020 are still fresh.