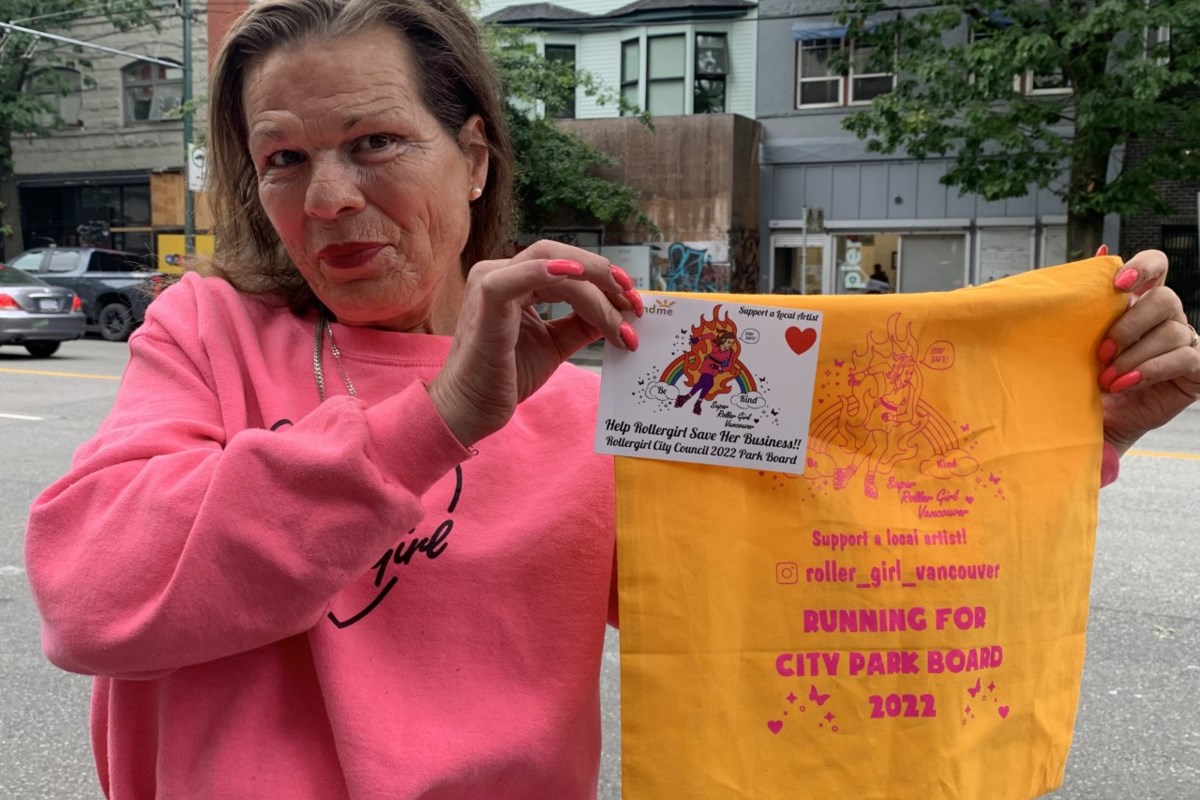 The pink-clad director of traffic at some of Vancouver’s major intersections says her election priorities are green sustainable housing, agriculture, safety and equality.

Vancouver’s best-known traffic safety icon wants your vote Oct. 15 for a seat on the city park board.

Yes, Roller Girl — also known as Angela Dawson — is once more casting her hat into the municipal politics ring. This is her second trip to the polls after a failed 2018-bid for the mayor’s chair.

“I am an asset to the community and will work hard for my fellow citizens,” she said. “I have fans out there. They want to vote for me.”

Dawson rollerblading in the area of ​​Main and Hastings has been a common sight for almost two decades, directing traffic while on wheels in her trademark bright pink attire. She’s also known to direct traffic at Commercial and Broadway and Main and 14th.

“I love it,” the transgender activist said. “I love preventing death. I like to enhance society.”

In an interview with Glacier Media, Roller Girl said her main priorities are green sustainable housing, agriculture, safety and equality.

She believes using parkland to build greenhouses will help to not only provide a secure source of food in the city but also provide jobs for people.

“Sustainable jobs all year round,” she said. “We need to find space for that.”

Sitting outside Vancouver Provincial Court on Main Street, Roller Girl sees the tents now spilling off Hastings onto the side streets.

She doesn’t have a problem with tenters using the parks.

But, she adds, “they should be monitored.”

“They shouldn’t take the park over,” she said. “I’m totally against that because it takes away from the community.”

And, she wants to see off-leash dog areas in parks fenced so that other park users can be safe and unbothered by the dogs.

She also would like to see the park board cooperate with the school board so city residents can use the combined properties for recreational activities.

“We all need to get together and talk about solutions,” she said. “No solutions are happening and the public and the voters are getting frustrated, don’t know who to vote for and what to vote for.”

“Set some goals and cooperate,” she said. “It would be a happier place to live.”

In the candidate papers’ disclosure section, she listed no liabilities, no assets, no income, no real estate and no corporate assets.

She said she’s not daunted by the prospect of sitting in long meetings but said, if elected, she wants to ensure full transparency in the board’s operations.

So why does she think she’d make a good park board member?

Roller Girl has taken on the Vancouver Police Department before and won. In 2015, she won a BC Human Rights Tribunal case after police referred to her by her ‘dead name,’ and refused her access to medical care.

The tribunal found that Dawson was discriminated against based on sex because she told officers that she was a transgender female and was not treated as such.

The tribunal ordered the Vancouver Police Board to pay Roller Girl $15,000 in damages for “injury to dignity, feelings and self-respect.”

More recently, Roller Girl’s been fighting a ticket for rollerblading behind a truck on Main Street. She had sought to fight the ticket on constitutional grounds but the case will go back before a judge as a bylaw fine case.