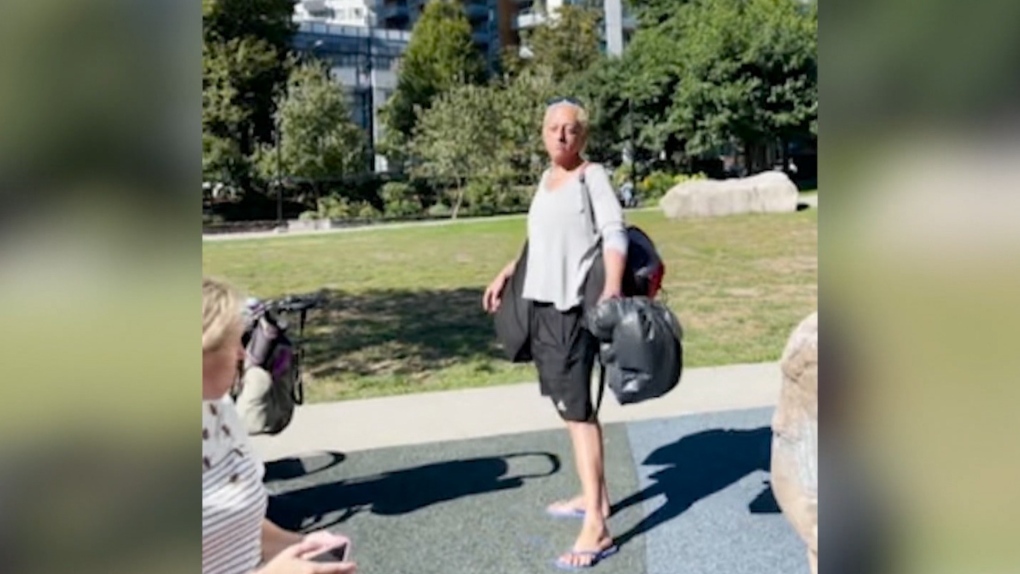 Two Vancouver mothers say the same man who chased and yelled at a woman in Yaletown this week also threatened to “kill children” in a nearby park that same afternoon. But when they called 911 for help, they say, no officers arrived.

“He kept saying, ‘The kids are gonna go to hell, they’re dead, you’ll see,’ and we’re like, ‘You’ll see?’ That made us think, like, are you going to harm our kids?” she said.

Hitchman was with her friend, Tiffany Tolmie, and both women had 17-month-old toddlers with them. Hitchman said the man initially started threatening another group of women and children, so they all huddled together for safety in numbers.

Tolmie recalled that the incident was “immediately terrifying” and said they were focused on trying to keep the children safe.

“We were trying to de-escalate the situation, we were asking him calmly just, ‘Please leave. We’re asking you nicely to leave,’” Tolmie said.

The man didn’t leave. In fact, the mothers said, he became increasingly agitated.

“He was calling me fat, he was saying I need to lose weight, I need to go to the gym, like, ‘You’re ugly. No one’s going to love you,’ just absurd things,” Hitchman said.

Part of the interaction was captured on camera and one of the women can be heard speaking on the phone to a 911 operator. Tolmie said the women were told to “hang tight,” but officers never came.

“The fact that we stayed for an hour and no one showed up when someone’s threatening to kill children at the park is incredible,” she said.

A few days later, Hitchman saw the same man’s face on a CTV News article after he’d chased another woman down the street on the same afternoon. Police officers did attend that scene, but the suspect had already fled.

“To see on the news that this same person, on the same day, had done the same thing to someone else and that’s where the police had been, I mean, that’s super disturbing,” Hitchman said.

VPD spokesperson Sgt. Steve Addison acknowledged there was a “time delay” in officers responding to the call at the park, suggesting that dispatchers could have been “triaging” calls due to a shortage of resources.

“It’s not necessarily acceptable, but sometimes there can be a time delay because we’re balancing risk,” Addison said, later confirming to CTV News that VPD had asked patrol units to follow up “immediately” with all women involved in both incidents.

Hitchman, who works in mental health and additions, said she is used to dealing with situations like this in her role, but not while at the park with children. She fears the system is failing.

“I know if I was acting in a way that that gentleman was, someone would have checked in on me, so who’s checking in on him?” she said.