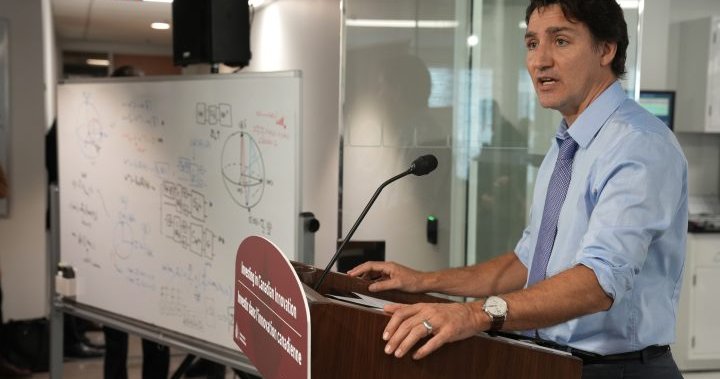 Prime Minister Justin Trudeau and Canada’s premiers will meet in Ottawa next month in a bid to find a new funding deal for health care.

Two federal sources granted anonymity because they weren’t authorized to speak publicly on the matter say Trudeau will announce the meeting this morning.

The prime minister and his cabinet are on the third and final day of a retreat in Hamilton, Ont. ahead of the return of Parliament next week.

Ongoing negotiations towards a new health-care funding pact have been front and center throughout the retreat.

The sources say the meeting is not intended to finalize a new pact but rather to solidify the steps needed to reach such a deal.

A spokesman for British Columbia Premier David Eby tells The Canadian Press the premiers will be in Ottawa Feb. 12 and 13 for a meeting and Trudeau is welcome to join them.

The prime ministers and the federal government have been jockeying around a new deal for months.

2:01
Trudeau meets with cabinet at retreat in Hamilton


Canada’s health care system is strained to the breaking point following three years of COVID-19 and a growing shortage of health-care workers.

The premiers are asking for Ottawa to increase its share of health care budgets to 35 per cent from about 22 per cent currently.

Trudeau and Health Minister Jean-Yves Duclos have not publicly specified how much Ottawa is willing to add to the health-care funding pie but have said any new money will require the provinces to show how it will be used to improve patient care.

In November a health ministers meeting ended in turmoil when provinces refused to accept any new funding deal with strings attached.

But progress has been made since Christmas and both Ontario and Quebec have indicated a willingness to give Ottawa what it wants at least when it comes to data and medical record technology.

2:15
Liberal cabinet retreat: Cost of living at the forefront of discussions


Ottawa transferred $45.2 billion to provinces for health care in the current fiscal year and currently expects it to increase that to $49.4 billion in 2023-24. The existing agreement sees the transfers increase a minimum of three per cent a year, or more if economic growth outpaces that.

Collectively the provinces spend more than one-third of their budgets on health care.