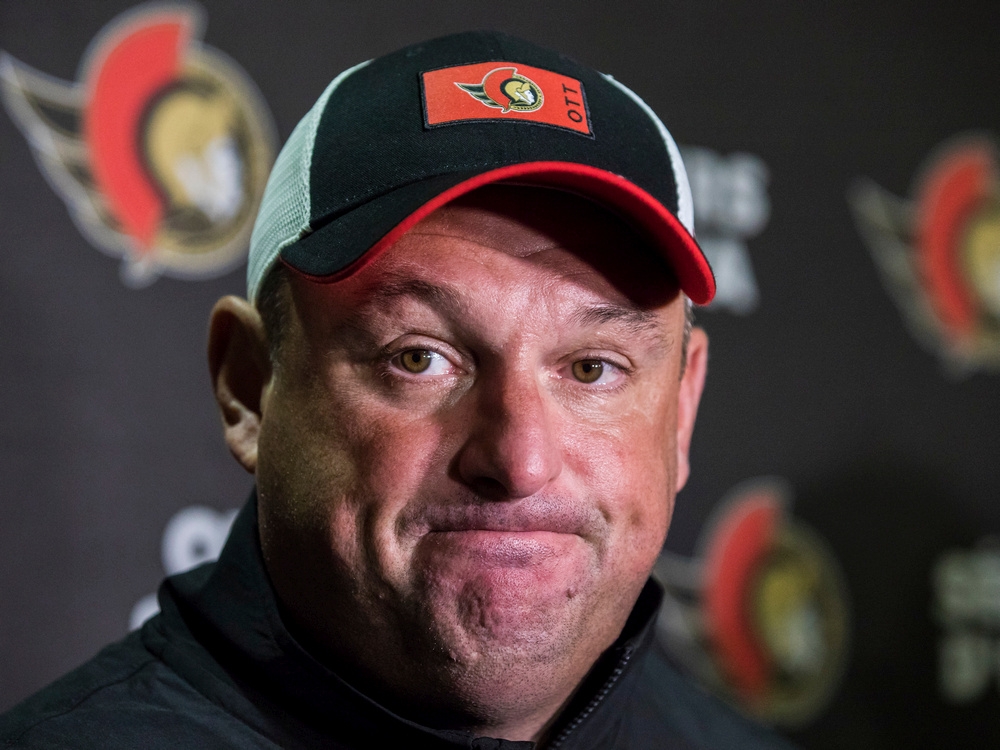 It was the dawn of a new era for the Ottawa Senators Thursday.

With new faces in different places, the club’s training camp shifted into high gear as the Senators took their first twirl under the watchful eye of general manager Pierre Dorion, coach DJ Smith and the rest of the hockey operations staff at the Canadian Tire Centre.

Sign up to receive daily headline news from the Edmonton Journal, a division of Postmedia Network Inc.

The next issue of Edmonton Journal Headline News will be in your inbox soon.

Split up into three groups — Team Alfredsson, Team Phillips and Team Neil — all went through their paces. That included a scrimmage between Phillips and Neil that will help the Senators determine where everybody fits when the season gets under way Oct. 13th against the Buffalo Sabres.

The atmosphere is different around here with plenty of anticipation this team is ready to turn the corner after the Senators added forwards Alex DeBrincat, Claude Giroux and Tyler Motte along with goalie Cam Talbot in the off-season.

“Guys are excited to try to prove themselves,” said veteran defenseman Nick Holden. “We want to start winning consistently and show people that we mean business around Ottawa now.”

The core of this team that’s led by captain Brady Tkachuk along with alternate Thomas Chabot, centre’s Josh Norris and Tim Stutzle along with Drake Batherson want to show people that with the right talent in place they can take their game to the next level.

“Some of the younger guys who have signed their deals in the last couple of years are looking to take a little bit more leadership and a voice in the room,” said Holden. “And, you’ve got some older guys coming in that have voices so it will be a good mix of everybody working off each other. It’s exciting to see where we go.

“It’s still early, but guys are excited. They’re excited to try to prove themselves.”

Just for good measure, Stutzle scored only 43 seconds into the scrimmage on a pass from Giroux to give Team Phillips a 1-0 lead so the day couldn’t have gotten off to a better start. Familiarity will help build the chemistry with this group and it’s paramount that’s in place before the season.

Really, the talk about all the off-season changes is now behind the Senators. Now, the plan has to turn to action. The players watched with wide smiles as Dorion made significant changes to the roster in the off-season. Now it’s time for the changes to pay off.

“It was fun. It was nice to get back out there and get skating again,” Tkachuk said. “We were just talking and guys are excited to get camp going and right into the games in a little bit. Right now, our focus is on trying to get better and more dialed in as each day goes on as camp goes along.

“That way when the season comes around we’re firing on all cylinders.”

The message from Smith and the coaching staff was to make sure the players use the pre-season to prepared to get off to a strong start. That’s an area where the Senators have struggled the last couple of years and they don’t want that history to repeat itself.

“It’s all about working and getting in game shape as quick as we can,” Tkachuk said.

The biggest decisions in this camp will be made on defence. The club has seven blueliners on one-way deals. The top four Thursday was Chabot with the steady Artem Zub while veteran Travis Hamonic was along side prized prospect Jake Sanderson.

Holden skated with Nikita Zaitsev while Erik Brannstrom was with Jacob Bernard-Docker. You can bet Smith will mix and match his duos throughout camp.

“You want competition in all positions because that pushes guys to play their best,” Holden said. “They know if they aren’t playing their best then there’s going to be somebody that’s going to be able to step in.”

Smith repeated the same words use by Dorion before camp got started by stating that “the best six defenseman will play.”

The reality is there aren’t many jobs open here. With restricted free agent winger Alex Formenton unsigned, there’s a spot on the left side on the third line and there’s a battle taking place on the fourth line as well to see who will skate there.

Decisions won’t be made anytime soon but it was nice to get this one out of the way.

“There’s been so much anticipation and guys just want to get back to the normal routine,” Smith said. “Day One some guys have jitters. Let’s get into a rhythm here because you’ve got to do it every day for the 200-some days.

“It’s good to get back at it but nothing will be won or lost on the first day.”

There isn’t a whole lot of time to get ready here. The Senators will skate Friday in Ottawa then 46 players and the staff will head to Toronto for split-squad games against the Toronto Maple Leafs Saturday at 1 pm and 7 pm

“It seems long but when you look at it there might only be or six real practices with the team when you cut down and the scrimmages,” said Smith. “It does seem long time-wise but you’re going to snap your fingers and we’ll be in Buffalo.”