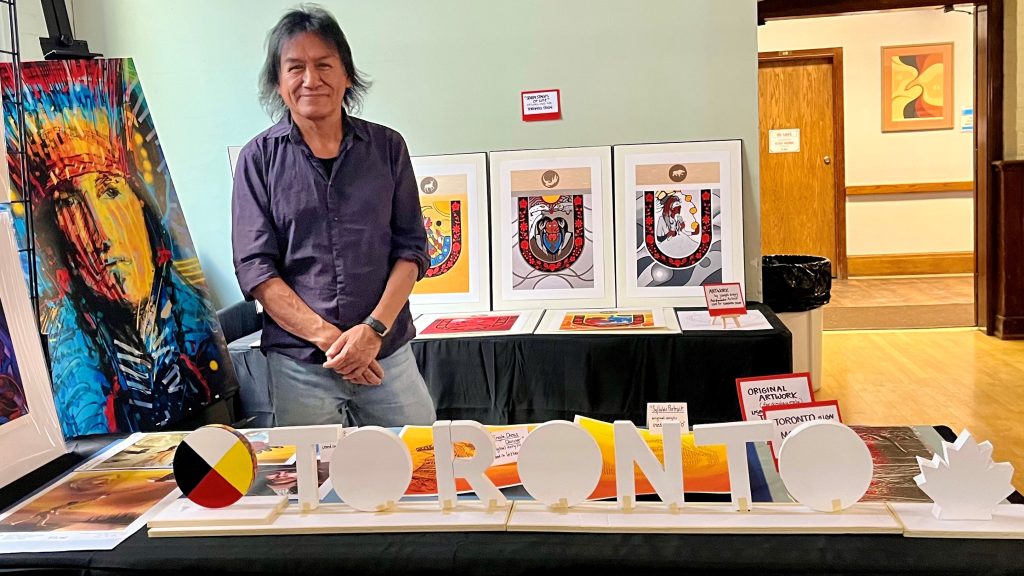 For more than 30 years, the Native Canadian Center of Toronto (NCCT) has been hosting its annual Indigenous Artisan Marketplace, bringing together First Nations creators from across the country at one of the largest Indigenous art markets in Canada.

Like most events over the course of the pandemic, the event was held virtually for the past two years and returns to in-person programming this year.

Social enterprises manager for the NCCT, Zacheria James, says they also chose to retain an online marketplace as it proved to be very successful.

“All of the artists who [participated] online did just as well online as they had in-person all the years previously, and some of them even significantly better, and are now continuing to operate their businesses online,” he tells CityNews.

Among the artisans featured this year is renowned artist Joseph Sagaj who designed the new artwork for the Toronto sign outside City Hall. Along with other works, he’s showcasing a piece called “Rekindle” at the market, seen on the iconic sign’s medicine wheel.

“Half of his face is used on one side and the other half on the other side. That one was based on a quotation by an elder, and basically, the quotation that I’ve kind of paraphrased and put together was about steering of embers for the future generations,” he says, adding that he credits the elders whose teachings inspired him to create the work.

“The teachings that I went to were pretty significant and eventually coming to a point where I utilized those teachings in kind of an art form to translate into some message for the world to see.”

He says he is looking forward to engaging with people about the Toronto sign and explaining the artwork and the narrative behind it.

“I do think of myself as an ambassador for my nation and for my community. So I try to put out good positive messages to [people] for them to take home with them, wherever they come from,” he says.

Sagaj is one of 50 artisans participating who represent a wide variety of skills and traditions.

“We have silversmiths, we have people who work in food artisan crafts, we have people who make artisan beeswax candles,” says James. “There’s going to be new artists here every single weekend. So you can come back multiple times. We have all of the returning artists that have been show favorites for a long time, but lots of new artists as well who have developed their businesses or arts over the pandemic.”

An enduring favorite returning this year who was not able to participate when the market moved online is Indigenous elder and knowledge keeper Margaret Cozry.

“I sell authentic First Nations items, and if we don’t keep it alive it’s not going to continue. But you can see here at the Native Canadian Center of Toronto that we have a real effort going on to revive the artistry,” she says.

Cozry sources items like Tamarac geese and handmade moccasins from makers across Canada.

“[The craftspeople] didn’t have any outlet for their work, and people would go in and pay such cheap prices, but the [good] is worth a lot more,” she says.

All the items she sells come with educational explanations and how to authenticate them.

“I ask [customers] to look for natural materials in the purchases that they’re [making]. Smell the hides and smell the tamarack, smell the sweet grass and smell cedar,” she says. “Whoever buys, they get educated, and then they pass that on as gifts to people.”

When asked why it’s important for people to learn more about the products she sells rather than treat them as simple consumer goods, she says, “because it’s our history. Our history is your history.”

“My mom actually taught me how to make my first pair of beaded earrings. So I always think of that when I’m stringing along my beads,” she says.

As a first-time vendor at the marketplace, she says she’s inspired by all the talented people she’s surrounded by and says platforming Indigenous artists is vital to the work of reconciliation.

“It’s important for repairs and to get Indigenous voices and work out there for people … and it gives people opportunity to be creative and shine and just put goodness out there,” she says.

James adds that with the holidays around the corner, the market is also an opportunity to pick up some unique gifts that are not mass-produced.

“If you’re the type of person that doesn’t like to get behind big retail at Christmas time, just buy gifts that don’t have heart. This is a wonderful place to come shopping, and I’m hoping that everyone will take something away that’ll be special for someone in their life,” he says.

The marketplace runs weekends from Friday to Monday until December 5.

Click here to learn about more vendors at the market this year.