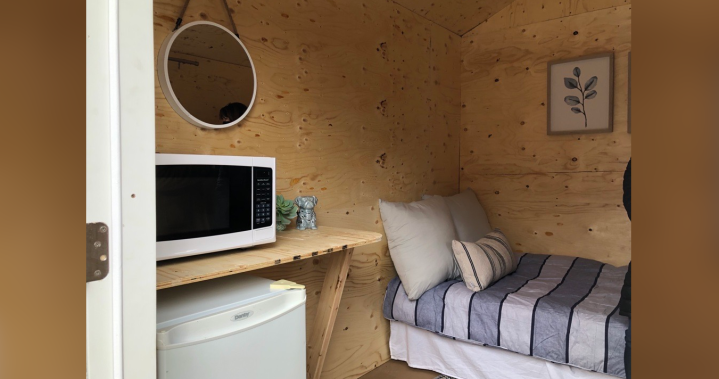 Hamilton councilors voted unanimously in favor of another staff review on a potential tiny shelters program to ease homelessness in the city.

The hope is to provide some sort of light for the Hamilton Alliance for Tiny Shelters (HATS) which has failed on a number of occasions to find a suitable site to build a community of eight-by-10 cabins.

The latest study will have the city pair up with HATS to try to align the organization’s model with Hamilton’s housing and homelessness strategy to address the needs of those who are unhoused.

Ward 3 Coun. Nrinder Nann, who supports the concept and brought the latest motion forward, expressed her frustration with the issue admitting her questions have largely gone “unanswered” throughout the process to date.

“That’s why I am taking the time, with my other colleagues around us, to put forward exactly what we’re asking for to enable this term of counsel to make the most informed decision it can on this initiative,” Nann explained.

Stoney Creek Coun. Brad Clark reiterated previous concerns about a potential endless debate in finding a suitable location amid “reluctance, reticence, fear, nervousness and apprehension” from constituents about having it in their neighborhood.

“We spent so much time looking for a location for ten (shelters). That’s disappointing for me,” Clark said. “If we put that same effort into finding housing, supportive housing for a larger number, think how far we would be along.”

HATS failed to get approval from city politicians Thursday for one of three potential sites to establish a community of small cabins.

Cathedral Park alongside Highway 403; the old Dominion Glass site near Gage Avenue and Barton Street; and Stuart Street near the CN Rail yard were the options brought forward to house the 10 shelters outfitted with a bed, microwave, mini-refrigerator and door locks.

The matter will now be put into the hands of a city housing staff currently engaged in a residential care facilities review, as well as a shelter review.

The group is expected to report back to the Emergency Community Services Committee in approximately four months.