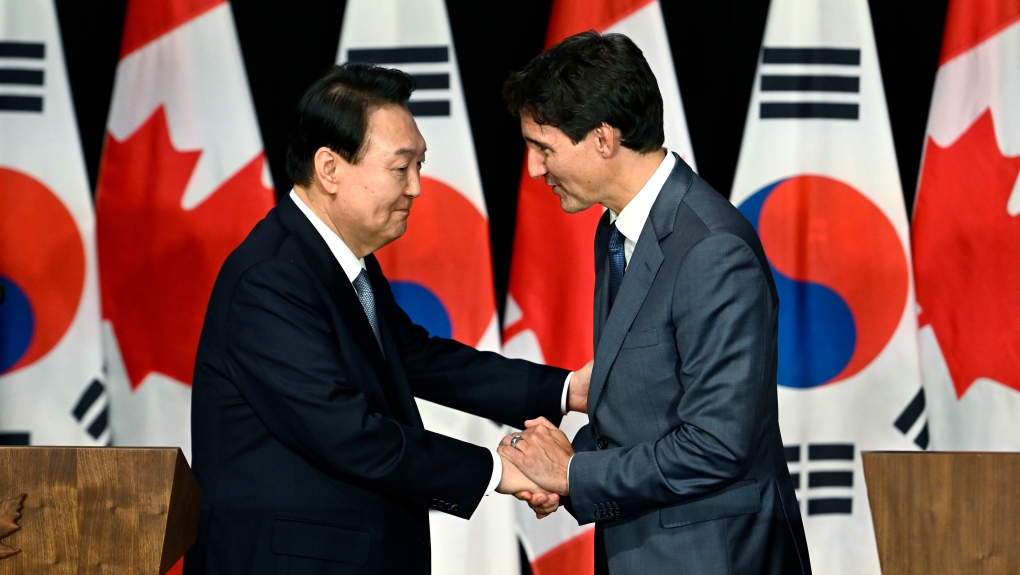 South Korean President Yoon Suk Yeol says Canada is a natural match for boosting the production of electric vehicles, as both countries try to contain the risk of a more aggressive China.

On his one-day visit to Ottawa Friday, the president praised Canada’s natural resources and research into artificial intelligence, saying they could complement his country’s work in digital technology and semiconductors.

“If we co-operate in this area, (Korea’s) digital and data technology and Canada’s AI technology can work together, I think, and in synergy,” Yoon said in Korean during a press conference on Parliament Hill.

Yoon already met this month with Prime Minister Justin Trudeau during the queen’s funeral in London and at the United Nations General Assembly in New York. From there, he had short flights for his one-day visits to Toronto and Ottawa.

Butanalysts saidYoon’s visit was more than a matter of convenience, noting it was his first formal bilateral visit since it took office in March.

Robert Huish, an international development professor at Dalhousie University, said Canadians often don’t realize how deep their cultural and economic ties have been with South Korea for decades.

“Canada sometimes forgets that it is a Pacific nation, and it’s very much committed to engaging in the South Korean market,” said Huish, who researches security in the Korean Peninsula.

“Going forward, there is a want to make that stronger.”

Huish said planeloads of Nova Scotia seafood used to arrive in South Korea multiple times a week before the COVID-19 pandemic and a network of Canada-Korea friendship groups has fostered strong industrial links.

“Canada is finding itself as a very strategic market to South Korea, from seafood exports to now getting into electric-vehicle components.”

Both could be on the agenda next month when Foreign Minister Melanie Joly and Industry Minister Francois-Philippe Champagne will be among a delegation heading to Seoul.

Yoon also thanked Canada for its support in containing the threat posed by North Korea.

Canada recently deployed a frigate as part of an ongoing, multinational surveillance operation that tracks whether the Communist regime is trying to evade sanctions. That includes monitoring for ships transferring fuel or commodities.

Friday’s meeting comes after months of anticipation for Canada’s Indo-Pacific strategy, a document that industry groups hope will clarify which countries Ottawa wants to grow closer to, and which countries should be lower priorities due to trade barriers or human-rights concerns.

Countries like Britain and France have already published such documents, and the Liberals promised Canada would outline its Indo-Pacific strategy months ago. On Friday, Trudeau pointed out twice that South Korea is also working on its own strategy for the region.

Also Friday, Trudeau announced Canada’s ambassador to China, a post that had been left vacant since last December.

He has tasked Jennifer May, a career diplomat with three decades of experience in foreign service, with advancing both trade and democratic values.

“China is certainly a really challenging actor in the region,” Trudeau said Friday. “A nuanced approach that is looking out for the interests of Canadians, the interests of citizens across our democracies, is essential.

“For too long, China and other autocracies have been able to play off neighbors and friends against each other, by offering bits of access to their market.”

At multiple points in his visit, Yoon mentioned Canada’s sacrifice in the Korean War, including after laying a wreath at the National War Memorial.

Earlier in the day, during a visit to Trudeau’s office in the West Block, Yoon praised his policies and support for multiculturalism.

“You are such an attractive leader; you brought unity to Canadian society,” a translator for Yoon said in English.


This report by The Canadian Press was first published Sept. 23, 2022.