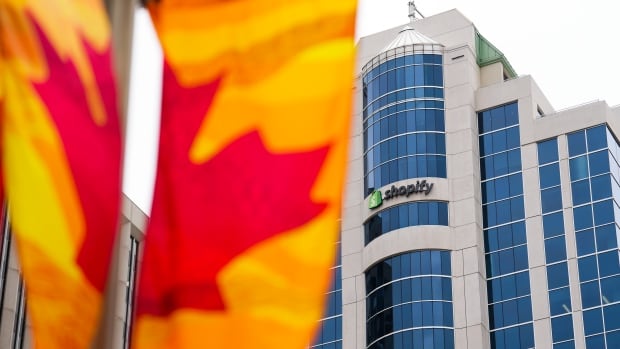 The Ottawa-based ecommerce company Shopify Inc. says it won’t withdraw its services from the online store of multiple anti-LGBTQ social media accounts despite some public outcry.

Details about who currently runs all the accounts isn’t listed, but an April 2022 Washington Post article about their viral posts named Chaya Raichik, a real estate salesperson in Brooklyn, NY, as the creator of the original Twitter handle.

The accounts often target and spread disinformation about the LGBTQ community, and advertise themselves as “Bringing you news you won’t see anywhere else.”

The Post profile on Raichik said her page had called for any teacher who comes out as gay to their students to be “fired on the spot,” and had urged followers to contact schools allowing “boys in the girls bathrooms.”

All of the merchandise (a T-shirt and two mugs) recently listed on the Libs of TikTok online store — powered by Shopify — is branded with the words “STOP GROOMING OUR KIDS.”

“The merchandise that’s being sold — it specifically uses the term ‘groomer,'” Troster said.

“It is an unfounded and really dangerous accusation of child abuse being leveled at people like me simply for existing in public space.”

Troster is calling on Shopify to remove its services from the Libs of TikTiok online store.

Shopify hosts businesses of ‘all stripes and sizes’

In an emailed statement, Shopify said the Libs of TikTok online store “is not currently in violation” of Shopify’s rules.

“We host businesses of all stripes and sizes, with various worldviews,” wrote a Shopify spokesperson. “We take concerns around the merchants on our platform very seriously, and Shopify’s [Acceptable Use Policy] outlines the activities that are not permitted on our platform.”

In the past, the company has removed products or stores associated with the Proud Boys, QAnon, and others, including TrumpStore.com, for violating Shopify policy.

Hi @tobi, if you want to talk about how this business profits from fomenting hate against people like me, give me a call. Allowing this on your platform is inexcusable, especially given the horrific violence in Colorado Springs. From one Ottawan to another: do the right thing. https://t.co/EwD6QYoS8q

Troster hopes Shopify changes its mind about the Libs of TikTok online store. The pressure comes in the wake of the recent shooting in Colorado Springs — where five people died and 17 others were wounded after a shooter opened fire in a LGBTQ nightclub.

Troster called Libs of TikTok rhetoric and posts “extremism,” and said its merchandise “does not need to be hosted by an Ottawa-based company.”

“This is not a disagreement about left or right,” she said. “This is about fomenting harassment and rage and potentially violence against the LGBTQ community.”

Fae Johnstone, executive director of the LGBTQ consultancy firm Wisdom2Action, said the spread of this kind of messaging gives license for homophobic and transphobic people to act on their hate.

“It also tanks or negatively impacts the mental health of the young folks and children who are seeing that,” said Johnstone, a trans activist. “It creates an environment where it’s harder for us to do the work that we need to do in our schools … because there’s a growing risk that they could end up on Libs of TikTok.”

Both Johnstone and Troster are encouraging Shopify to make a stand by cutting ties with the account. They say stopping the flow of funds to groups promoting discrimination is an effective way of limiting the hate they spread.

Johnstone said one option is to “boycott Shopify.”

“And that is what we’re encouraging everyone to do … Because if they are not willing to oust one client that is homophobic and transphobic, they’re not deserving of any of our business,” Johnstone continued.

CBC News requested comment on this story from two email addresses associated with Libs of TikTok, but did not receive a reply.