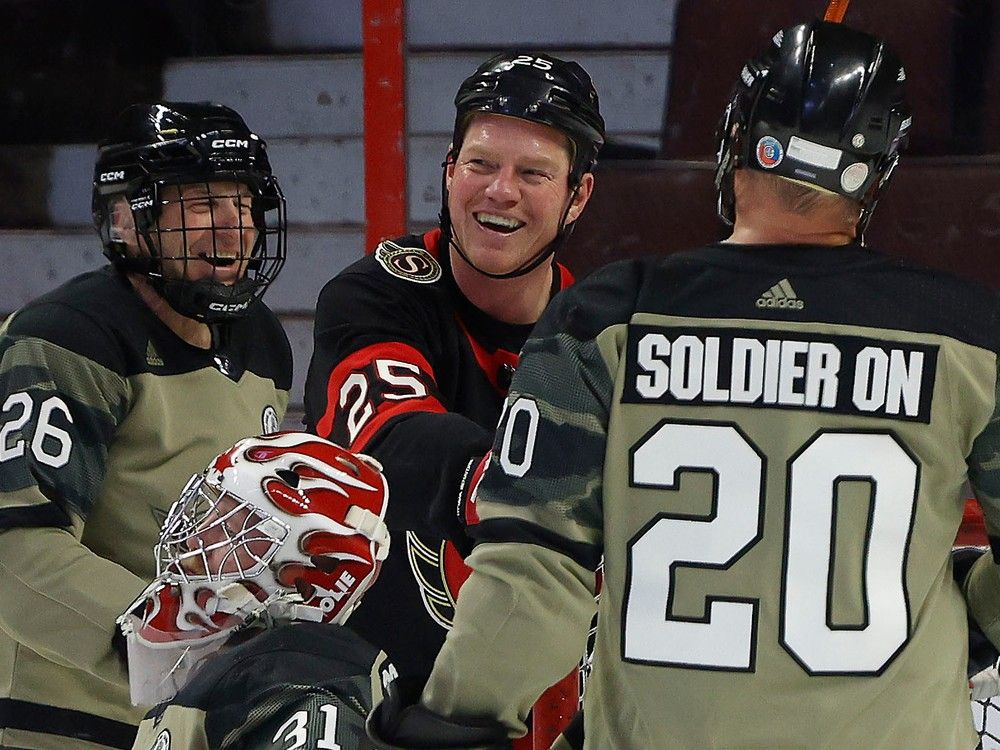 For the past three years, life has been a struggle for warrant officer Bradley Mombourquette, a combat engineer based at CFB Borden, 30 minutes out of Barrie.

Just as COVID-19 struck in March 2020, Mombourquette was diagnosed with glioblastoma, a Stage 5 brain cancer.

“I’ve gone through a full year and a half of treatment and now I’m finally going back to work,” Mombourquette said, only moments before fulfilling a lifetime dream of playing hockey in an NHL arena.

“I’m returning to duties, up to three days a week. As long as I continue to get good (brain) scans, I will be able to increase my time.”

There have been similar stories all around Canadian Tire Center this week, as the Ottawa Senators organization teamed up with Soldier On for a three-day training camp that culminated with a game against Senators Alumni on Wednesday afternoon in front of 100 fans.

Soldier On is a Canadian military program that helps guide veterans through injuries, as well as the transition into civilian life. PTSD and depression are commonplace.

One of the highlights of the initiative is the opportunity to share stories with fellow veterans and former NHL players, many of whom have also struggled once their careers end.

The Senators have held the camps since 2015, with the exception of a two-year COVID-19 hiatus.

Mombourquette was a presence on the ice Wednesday, going head-to-head against a group of former Senators that included Chris Neil, Shean Donovan, Brad Smyth and Pascal Leclaire.

The past few days have been as much about bonding with fellow veterans as it is about meeting some of their hockey heroes.

“A lot of these people are going through a similar situation that I’m going through or have already gone through,” said Mombourquette. “And I learned a lot from them.”

A Sydney, NS native, he also embraced the chance to rub shoulders with Shaun Van Allen, now head coach of the Carleton University Raven. Van Allen was captain of the American Hockey League’s Cape Breton Oilers when they won the Calder Cup trophy in 1993, back when Mombourquette first fell in love with hockey.

Major James McPhee, who has been stationed throughout Canada while serving as a pilot for the past 37 years, says his work triggered an injury that caused an autoimmune condition. In turn, he says “that creates its own muscular-skeletal challenges.”

As McPhee went through the three days of on and off-ice exchanges, he discovered that there’s a natural connection between members of the military and ex-NHL players.

“We have a lot in common with them,” McPhee said. “They’re experts in their fields, too, and they go through injuries, and they live with some of the same setbacks when they try to get back to active duty and back to the lineup. Also, when their careers are done, maybe because of injury, maybe because of age, all of a sudden their career is done. What do we do now? It can be scary for us.”

Indeed, life after hockey can be a daunting experience for players who have known little else since they were young.

It wasn’t easy for Pascal LeClaire, the former Senators goaltender who battled injury after injury before being forced to end his career during the 2010-11 season.

“It’s close to me, too,” said Leclaire, who skated as a defenseman for the game. “I went through a depression when I had to retire.” He knew the end was coming with his injury, but it didn’t hit until that day he was by himself, in his living, watching hockey on TV. “For (the veterans), they’re not part of their team or they’re not with their friends anymore. I can see that it’s a bit of the same thing.”

But on Wednesday, the 17 soldiers on the ice — 13 men, four women — were in their glory. As the game went on, many of the players exchanged teams, with the veterans wearing Senators colours.

There were fans there, too. Just ask Andrew McLaughlan, who had a large cheering section.

When McLaughlan scored late in the first period, he heard the applause from the first row of the seats. Those cheers came from his brother, Jacob, sister-in-law Anick Marois and their four children: Rylee, Logan, Charlie and Milo.

“We come from a long family of military members,” said Jacob. “My uncles, my Dad, my grandfather, it has gone down the line, so it’s nice to see my brother get a little appreciation for what he’s doing.”