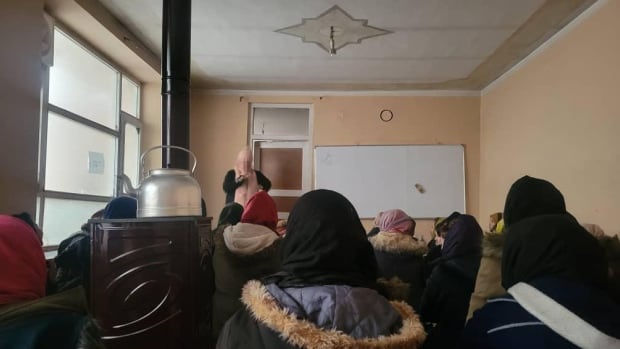 Afghanistan’s ruling government, the Taliban, does not allow young girls to continue their education beyond Grade 6. But one teacher in the capital, Kabul, is teaching her students how to cope with the tyranny — at a secret school.

Sahar, whose last name CBC News is not disclosing for her safety, is unlike colleagues who teach the girls math, science and geography. In her class, they study psychology and participate in group counseling.

“I teach them some techniques on how to control their lives,” Sahar told Nothing Is Foreign host Tamara Khandaker.

Nothing is Foreign28:19Inside a secret school for girls in Afghanistan

Since the Taliban seized power in Afghanistan in August 2021, there has been a crackdown on the rights and freedoms of women in the country. Despite initially promising that a woman’s right to study and work would be preserved, the Taliban has enacted policies that virtually ban women from public life. Girls are not allowed to continue their education beyond Grade 6. Afghan women have pushed back on the restrictions, and this week on Nothing is Foreign, we hear one woman’s story of resistance. Sahar, whose last name we are not disclosing for her safety, teaches at a secret school for girls in Grades 7-12 in Kabul. Featuring: Obaidullah Baheer, lecturer at American University of Afghanistan.

In university, Sahar studied educational psychology. But when the Taliban re-took control of Afghanistan in 2021, her life completely changed. She lost her job and many friends fled the country or were detained.

That was when she discovered choice theory, part of American psychiatrist Dr. William Glasser’s 1965 model of reality therapy.

Reality therapy is a form of counseling that views behaviors as choices. Those choices are attempts to fulfill five basic human needs: survival; freedom; fun; power; and love and belonging.

There are 75 to 80 girls in Sahar’s class, all between grades 6 and 12, and once a week they sit on a carpet to learn how to soothe their minds.

They defy the Taliban’s ban on their education by attending the secret school discreetly, inside a home in a supportive residential neighbourhood. As a precautionary measure, the girls don’t even bring their materials — no books, pens or paper.

If the government were to discover the school, and prove that these classes were taking place, everyone involved would be at risk of being detained.

Despite her fears, Sahar provides her students with mentorship and emotional support.

The psychological stress of these students is acute. Sahar said one of her students did not have enough food at home to feed her family. It caused the girl so much pain that she considered suicide.

“‘The only reason that I didn’t kill myself [was] that you told me that if I have any kind of issues, I can come and share it with you,'” Sahar recalled her student saying.

The teacher encouraged her student to ask questions and seek alternatives. After a few weeks, she saw that the student was feeling better.

“She understood that she cannot end the poverty. She cannot make bread from somewhere. Neither [can I] bring that for her…. But at least [with] these techniques … she could build good relations with her mother, with her sister, with her father.”

Food has been hard to come by in Afghanistan since the resurgence of the Taliban. The US and its allies suspended funding and aid to the country, which the population has relied on for years, due to international policies around interacting with the Taliban.

Economic sanctions are meant to punish the group for its treatment of women and girls, but the broader Afghan population is left facing a severe humanitarian crisis.

“Putting more sanctions on Afghanistan will only hurt the nation,” Sahar said.

In an interview with the Associated Press in November, Martin Schuepp, a top official from the International Committee of the Red Cross, said half of Afghanistan’s population — or 24 million people — is in need of humanitarian aid. He added more Afghans will struggle for survival as living conditions deteriorate in the months ahead.

Obaidullah Baheer, a lecturer at the American University of Afghanistan, told Nothing is Foreign that the international community can exercise leverage if they meet with the Taliban and build trust.

“The international community’s policies haven’t cared for Afghans stuck in the middle,” Baheer said about the impact of Western sanctions. “Yes, sure, they’re flying in money to help sustain the Afghan currency and the economy from free-falling, but then [the Taliban are] holding multi-billion dollars’ worth of reserves.”

“The Taliban are to blame as well, because their policies have led to further distance and engagement, further isolation,” Baheer said. “It’s just a vicious cycle.”

In the meantime, Sahar continues to hold her psychology classes to help girls cope with the hardship, despite the fear of being found out.

“We are afraid and scared of the situation, but we are living with our values,” Sahar said. “And when you live with your values, you have to accept that there will be some consequences.”

If you or someone you know is struggling, here’s where to get help:

This guide from the Center for Addiction and Mental Health outlines how to talk about suicide with someone you’re worried about.