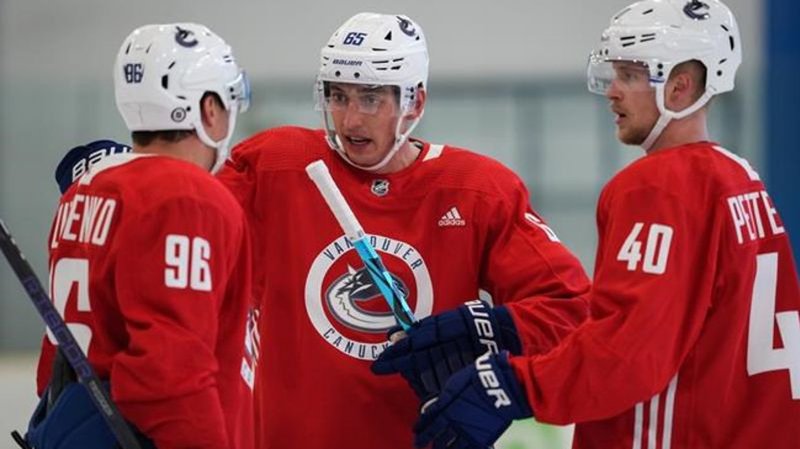 The 27-year-old right-winger had 32 points in 53 games for the Leafs last season, then added two goals and two assists in seven playoff appearances.

Kuzmenko, 26, comes to the Canucks from the KHL on a one-year, entry-level deal. The five-foot-11, 194-pound forward produced 52 points and 10 penalty minutes in 45 games with St. Petersburg SKA last season.

The duo are familiar with one another, having played “a couple of shifts” together on the Russian national team four or five years ago, Mikheyev said.

“One good thing, we can speak the same language and I can help him understand when guys tell him something,” he said.

Both new additions are “pretty skilled” and stood out on the first day of training camp on Thursday, said Canucks head coach Bruce Boudreau.

“You could see the skill in them, you could see the release in the shot,” he said. “I don’t want to make too many comparisons at all, but Kuzmenko’s release is a lot like (Alex Ovechkin’s) release, looking at both of them off the left side.

“I think they played with energy. And you could tell that they weren’t just out here, they wanted to make a good impression. I think they did.”

It won’t be long before fans are captivated not only by Kuzmenko’s play, but by his personality, too, Boudreau added.

“I said the first day I saw him, ‘If this guy’s as good as advertised, he’s going to take the city by storm,’ he said.

Vancouver has made an impression on Kuzmenko, too. He’s been in the city for several weeks, skating with his new teammates, exploring the city, and taking in concerts and a Vancouver Whitecaps soccer game.

“Vancouver is a beautiful city for me. I like the place, the mountains, the ocean, the forest. I like it,” he said. “

Kuzmenko is looking forward to seeing how his game translates to the NHL’s smaller ice, saying he likes to play in tight spaces.

Asked whether he could be even more successful on the smaller surface, the charismatic forward grinned.

Pulling on a Canucks jersey has been somewhat surreal for one of the team’s other off-season acquisitions.

Growing up in Salmon Arm, BC, Vancouver was the team Curtis Lazar cheered for. Signing with his hometown club as a free agent in July was a natural fit, the 27-year-old forward said.

“It’s incredible. It still hasn’t really sunk in,” he said. “And you’ve seen all the development staff, too, the former players. I mean, I grew up watching those guys, and now they’re coaching me or whatnot. So it’s pretty cool.”

Lazar comes to the Canucks on a one-year, $1-million deal after tallying 16 points and 16 penalty minutes for the Boston Bruins last season.

Originally picked 17th overall by Ottawa in the 2013 NHL entry draft, the six-foot, 203-pound forward has played for the Bruins, Senators, Calgary Flames and Buffalo Sabers over eight seasons in the league.

“(Lazar’s) got the experience, he’s aggressive, he’s played on winners,” Boudreau said. “He’s an NHL hockey player and you give him a shot at scoring, he’s going to score. He’s going to kill penalties, he’s going to bring a lot to this team.”

Being able to have an on-ice impact for your favorite team is a special opportunity, Lazar said.

And he sees big things for a Canucks team that finished last season five points out of a playoff spot with a 40-30-12 record.

“Nine years in the league, this is the most skill and speed I’ve seen on a team,” Lazar said. “It’s a matter of us putting it together, playing hard collectively, and we’ll be all right.”

This report by The Canadian Press was first published Sept. 23, 2022.