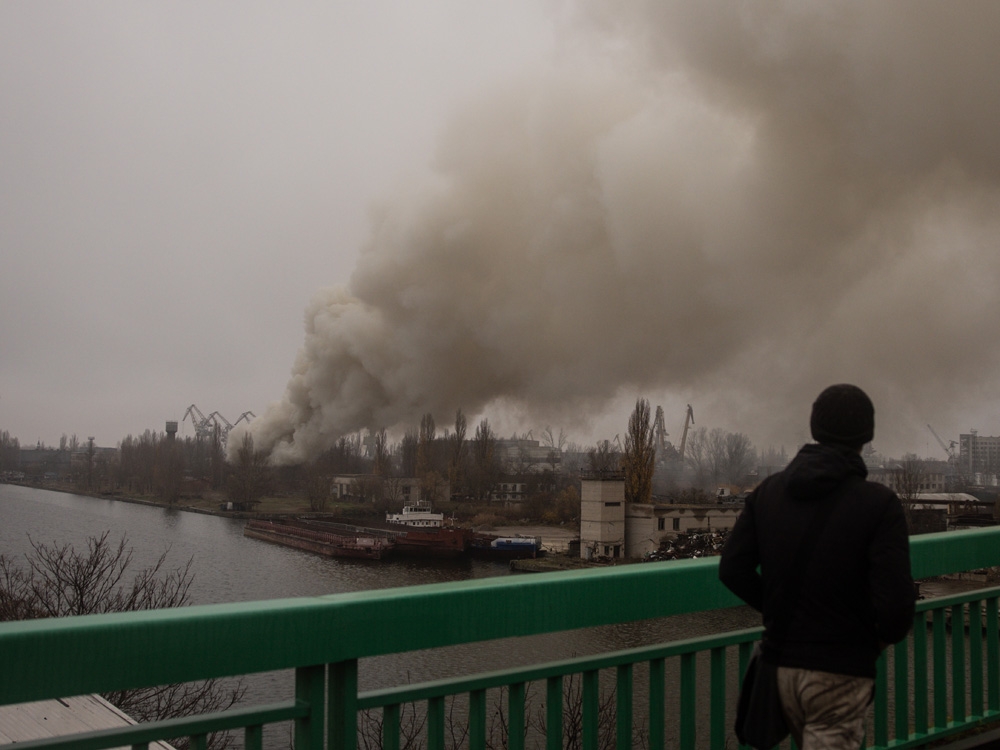 KHERSON, Ukraine — Natalia Kristenko’s dead body lay covered in a blanket in the doorway of her apartment building for hours overnight.

City workers were at first too overwhelmed to retrieve her as they responded to a deadly barrage of attacks that shook Ukraine’s southern city of Kherson.

The 62-year-old had walked outside her home with her husband Thursday evening after drinking tea when the building was struck. Kristenko was killed instantly from a wound to the head. Her husband died hours later in the hospital from internal bleeding.

“Russians took the two most precious people from me,” their bereft daughter, Lilia Kristenko, 38, said, clutching her cat inside her coat as she watched on in horror Friday as responders finally arrived to transport her mother to the morgue.

“They lived so well, they lived differently,” she told The Associated Press. “But they died in one day.”

A barrage of missiles struck the recently liberated city of Kherson for the second day Friday in a marked escalation of attacks since Russia withdrew from the city two weeks ago.

The city was shelled 17 times before midday Thursday, and strikes continued into the evening, killing at least four people and injuring 10, according to Kherson’s military administration. Soldiers in the region had warned that Kherson would face intensified strikes as Russian troops dig in across the Dnieper River.

Scores of people were injured in the strikes that hit residential and commercial buildings, lighting some on fire, blowing ash into the air and littering the streets with shattered glass. The attacks wrought destruction on some residential neighborhoods not previously hit in the war that has just entered its tenth month.

After Kristenko’s parents were hit, she tried to call an ambulance but there was no phone network, she said. Her 66-year-old father was clutching his stomach wound and screaming “it hurts so much I’m doing to die,” she said. He eventually was taken by ambulance to the hospital but died during surgery.

On Friday morning people sifted through what little remained of their destroyed houses and shops. Containers of food lined the floor of a shattered meat store, while across the street customers lined up at a coffee shop where residents said four people died the night before.

“I don’t even know what to say, it was unexpected,” said Diana Samsonova, who works at the coffee shop, which remained open throughout Russia’s occupation and has no plans to close despite the attacks.

The violence is compounding what’s become a dire humanitarian crisis. As Russians retreated, they destroyed key infrastructure, leaving people with little water and electricity. People have become so desperate they’re finding some salvation amid the wreckage.

Outside an apartment building that was badly damaged, residents filled buckets with water that pooled on the ground. Workers at the morgue used puddles to clean their bloody hands.

Valerii Parkhomenko had just parked his car and gone into a coffee shop when a rocket destroyed his vehicle.

“We were all crouching on the floor inside,” he said, showing the ash on his hands. “I feel awful, my car is destroyed, I need this car for work to feed my family,” he said.

Outside shelled apartment buildings residents picked up debris and frantically searched for relatives while paramedics helped the injured.

“I think it’s so bad and I think all countries need to do something about this because it’s not normal,” said Ivan Mashkarynets, a man in his early 20s who was at home with his mother when the apartment block next to him was struck.

“There’s no army, there’s no soldiers. There are just people living here and they’re (still) firing,” he said.

The government has said it will help people evacuate if they want to, but many say they have no place to go.

“There is no work (elsewhere), there is no work here,” said Ihor Novak as he stood on a street examining the aftermath of the shelling. “For now, the Ukrainian army is here and with them we hope it will be safer.”