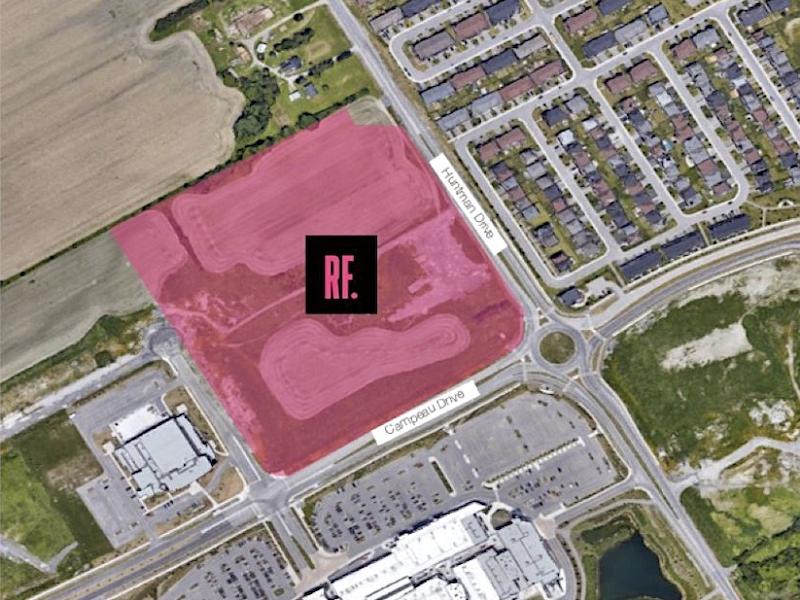 Montreal-based developer Rosefellow is continuing to expand its portfolio in Ontario, acquiring a near-22-acre site in the west end of Ottawa where it plans to construct twin, 250,000-square-foot distribution centers.

Rosefellow co-founders Mike Jager and Sam Tsoumas said the firm is working with the City of Ottawa on site planning and approvals to move ahead with the development as soon as possible.

“We are planning to build two 250,000-square-foot, state-of-the-art distribution centers with a minimum 32-foot clear ceilings completely on spec,” said Jager in a video produced by Rosefellow to publicize the acquisition. “We feel strongly that this is what the market is thirsty for and we will be making significant investments to see it become a reality.”

Rosefellow acquired the property on behalf of the RF Limited Partnership, for approximately $25 million.

“We are bullish about Kanata because it is a good, healthy and growing market. The municipality is business-friendly and wants to bring new and better jobs to the city,” Tsoumas said in the video.

The land is zoned for general/light industrial and is fully serviced. It fronts on three streets and fits into what Jager and Tsoumas call a refined strategy for development sites.

Included in this formula are nearby residential areas so people don’t have to commute as far to their jobs, and being within walking distance of amenities such as food and retail. This site is adjacent to two residential developments and the Tanger Outlets Ottawa property.

It’s also adjacent to another site where a 140,000-square-foot light industrial building is being constructed, said Matt Shackell, a vice president with Lennard Commercial Realty in Ottawa.

Lennard sold the parcel off-market for its client Taggart Group of Companies.

The neighboring building is about half pre-leased, Shackell told RENX in an interview.

The Amazon effect in Ottawa

“Why these developer groups from outside Ottawa, across the country, have come here is because they realize our net rents are very attractive,” Shackell explained, also noting that a major move into the market during the past couple of years by Amazon has created a significant ancillary effect.

“And Ottawa is a growing market as a whole, population-wise the residential market’s been doing extremely well, employment is quite strong here and it really boils down to Amazon . . .”

The e-commerce giant has opened several facilities in Ottawa during the past two years.

“A lot of groups, logistics, courier companies, e-commerce businesses kind of followed suit, they wanted to be around Amazon. That’s why we’ve seen this massive spike in our market,” Shackell said.

It also has inflated leasing rates. A few years back Ottawa was an $8-per-square-foot market. Today, top-quality product commands $14.50 to $16.50, he said.

One of Rosefellow’s two other Eastern Ontario properties is near the Amazon Barrhaven facility.

It is also developing a 531,000-square-foot regional distribution center for Ford in the town of Casselman, just east of Ottawa. It is partnered with Montreal’s Bertone Development Corp. at that site.

Despite the flurry of activity however, huge leasing deals remain the exception.

While there continues to be interest from some larger firms seeking blocks of space at or above 100,000 square feet, the vast majority of deals are significantly smaller.

“All these groups that have been buying land here, and going to be spec building, I’ve told them to be prepared to have multiple tenants, not just two or three where they are going to be 200,000 to 300,000 square feet each,” Shackle noted.

Many local businesses are expanding their operations as the city grows and its light industrial sector also expands. This is providing a complement to new, larger players entering the market.

Despite a slowdown in some sectors in recent months, Shackell said he doesn’t think the window has closed for development companies to provide good product in Ottawa.

In that vein, Lennard just brokered a 26-acre land transaction in the east end, along Hwy. 417 near Walkley Road.

That site, which features about 15 to 18 acres of developable land, was acquired by Quebec-based Oktodev for about $500,000 per acre.

It’s not far from where local developer Avenue 31 is also constructing light industrial on spec. Leasing is also underway for the first phases of that property.

“There’s a great opportunity for more groups like Rosefellow that have been very ambitious and driven to come up with a solution, to buy land at a high price and spec (build) upwards of a half million square feet here in Ottawa,” Shackell said .

“I think they will be very successful with it, but it won’t happen overnight.”