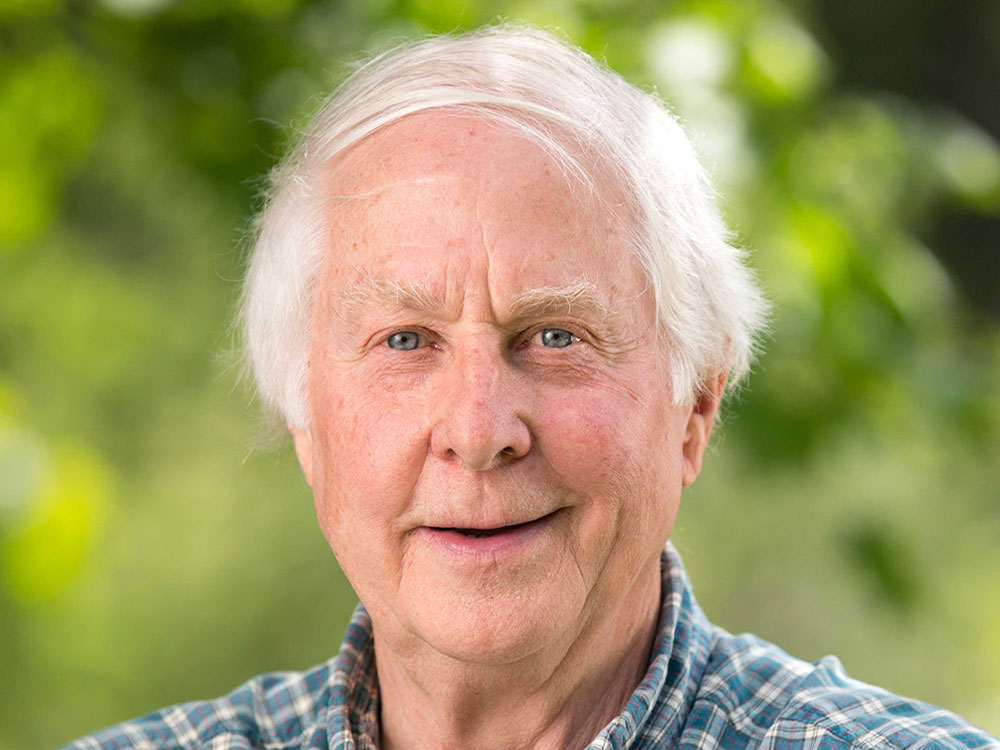 A retired forester with more than 40 years in the business is leaving the industry’s professional organization, citing an array of issues from lack of environmental stewardship to its cozy relationship with industry.

CONTEST: Win a Pair of Tickets to ‘A Midsummer Night’s Dream’

Four lucky readers will get free passes to the Vancouver Opera’s winter performance.

Herb Hammond resigned his membership with the Association of BC Forest Professionals in a 2,000-word letter addressed to its president, Garnet Mierau, and ABCFP council members, saying he could no longer remain silent on the “degradation and frequent destruction of natural forest[s]” as a result of forestry activities.

Hammond, who was designated as a retired forest professional until his resignation this week, told The Tyee it was a relief to express his frustrations with the professional organization.

“After many decades of trying to tolerate, I guess is the right word, the association, it did feel good,” he said. “For many years, I’ve tried to address the endemic problems in forestry with the association that I explained in my letter of resignation.”

“The part that they could never seem to understand is that it’s not a problem of individuals, it’s the culture of forestry,” he said.

In the letter, which was posted online, Hammond outlined in detail the ways he believes the organization has contributed to the “many endemic problems that plague the profession.” He described a “business as usual” approach to forest management that is contributing to climate change and biodiversity loss, and an annual timber harvest that he said it based on “questionable (or no) science.”

“Together with a strong lobby from the timber industry to keep the cut as high as possible for as long as possible, the structure used to calculate timber available results in non-sustainable AACs [annual allowable cuts],” Hammond said, referring to the amount of logging the industry is permitted to undertake each year.

“The ABCFP has an obligation to provide scientifically sound and precautionary models, inventory standards and forestry methods that protect the broad public interest. This obligation has been shirked to the point that the ABCFP may be viewed as more of an industry lobby group than a professional association that stands up for the well-being of the public.”

In a statement emailed to The Tyee, ABCFP CEO Christine Gelowitz, who is also a registered forester, said Hammond’s letter “demonstrates a misunderstanding” of ABCFP’s mandate, misconstruing it with the role of government.

“By provincial law, the ABCFP’s duty is to regulate the people who practice professional forestry,” Gelowitz said. Activities that fall under its jurisdiction include setting education, professional service practice and competency standards, as well as a code of conduct.

“Neither the ABCFP, nor its registrants, have been assigned the duty or authority to set forest management objectives, rates of forest harvest or other forest management policy concerns raised in Mr. Hammond’s letter. That accountability is held by the Province of BC or the landowner.”

But Hammond made it clear he doesn’t believe the organization is acting in the public interest.

In addition to biodiversity loss and carbon emissions, Hammond’s letter said BC’s forest industry is having an impact on water resources. But he said the ABCFP has been “silent” about the issues, making it appear that the association is “captured by the timber industry and not acting in the public interest.”

“Science supports that old-growth forests provide the best water with the most reliable flows. Climate scientists remind us that with the loss of intact, natural forest cover, water problems will increase as climate change progresses, leading to more floods, droughts and water shortages,” he wrote.

Despite promises by the BC NDP government to defer logging in sensitive areas, recently reporting by The Tyee revealed the regulations, introduced in 2020, were toothless.

Judy Thomas is a Prince George-based professional forester and association member who said she read the letter and agreed with most of it. She described a disconnect between foresters who align with Hammond’s perspective and the ABCFP, saying that the public is recognizing shortcomings in forestry policy that isn’t being addressed by the organization.

In his letter, Hammond questioned the forest industry’s reliance on professional oversight and its lack of accountability.

“We have private entities preparing plans and carrying out timber extraction on public lands with no effective accountability to the public. The ABCFP support for professional reliance is a direct conflict with their stated intention to protect the public interest,” he said.

Hammond also criticized the industry’s use of clear cutting, which he said has been “thoroughly discredited for its wide-ranging negative impacts” on the environment and employment, and the targeting of BC’s forests for international use by the wood pellet industry.

While pellets have been marketed as a waste-wood product, recent media investigations revealed that old-growth forests are being logged and shipped overseas for pellet production by UK-based Drax Group.

“The ABCFP is silent about the problems created by the wood pellet industry, despite the fact that creation of wood pellets is not in the best interest of the public, particularly since it increases greenhouse gas production,” Hammond said.

Hammond also took aim BC’s former chief forester Diane Nicholls, who left the provincial government earlier this year to take a job with Drax, and the association’s failure to initiate a review of what he described as Nicholls’ “unethical actions” around expanding wood pellet production before moving to industry.

He described a “culture of silence” on issues relating to the public interest and credibility of forestry professionals.

“The forests are in trouble. Earth’s climate is collapsing. The ABCFP and many of its members are complicit in this trouble,” the letter concludes. “I no longer wish to be part of an organization that is unable to see the forest for the timber.”

Michelle Connolly agreed that BC’s forestry industry faces a culture crisis. It’s something that determined her from working as a professional forester, despite a UBC bachelor of science in forestry and a master’s degree in forest ecology from UNBC.

Instead, she founded Conservation North in 2017. The community organization advocates on environmental issues in north-central BC and has called on the provincial government to protect primary forests.

“It’s a powerful letter delivered in a very measured way, I thought, and a very factual way,” she said, adding that she hopes it could nudge the industry in a new direction.

“I think for the sake of nature in BC, we have to hope that this letter will encourage a complete systemic change in that culture,” she said. “I think there’s a place for forestry expertise now and I think that place is in second growth forests.

“Primary forests, including natural forests, really ought to be left alone at this point in time, and Herb Hammond says that as well.”

The letter also criticized what Hammond described as the association’s refusal to allow retired forest professionals to advise on industry practices.

“In many aspects of societies retired people are viewed as sources of wisdom to be consulted and listened to as a way of reaching sound conclusions that protect the public interest and the ecosystems that sustain them,” he said.

A registry on the ABCFP’s website lists Hammond as a retired professional forester who first registered with the organization in October 1982. His registration expires this month.

Hammond describes himself as a forest ecologist based in southeastern BC’s Slocan Valley. He continues to work and is currently writing a book.

He and his wife, Susan, founded the Silva Forest Foundation in 1992. According to the organization’s website, it has worked with communities throughout Canada to create ecosystem-based conservation plans. It ceased operation in September 2020, according to the site.

In 2003, Hammond received the Gold Award for Sustainable Living at the Canadian Environmental Awards, according to the foundation.

He has also authored two books, Seeing the Forest Among the Trees: The Case for Wholistic Forest Use (1991) and Maintaining Whole Systems on Earth’s Crown: Ecosystem-based Conservation Planning for the Boreal Forest (2009).

In its response to The Tyee, the ABCFP said the association’s professional development standards for practicing foresters are designed to “maintain their competence and knowledge.”

The same requirements do not apply to retired forest professionals, it added.

“Retired forest professionals are free to share their opinions but they are not allowed to provide advice or services that constitute the practice of forestry,” ABCFP’s Gelowitz said.

Some BC Old-Growth Review Findings Blocked by Forestry Execs

“We recognize that Mr. Hammond and others may want different forest policy choices made and different objectives set for forests and forest management in BC One of the strengths of the ABCFP is the diversity of views within our population of registered forest professionals.”

However, Gelowitz said the ABCFP does not “pick sides or lobby” for particular forest policies.

“The reality remains that in BC, policies and decisions on how our forest land base is used are made by the landowner, in this case the Province of BC, via the provincial legislature and the government composed of those elected by the voters of British Columbia ,” she said.

Hammond said he wanted to support practicing foresters that would like to see a change of direction for the industry.

“My overall hope for the letter, and it becoming public, is that it supports the people that are still out there trying to do something different,” he said. “Because I know from being one of those people for 40 years, it wasn’t easy.”