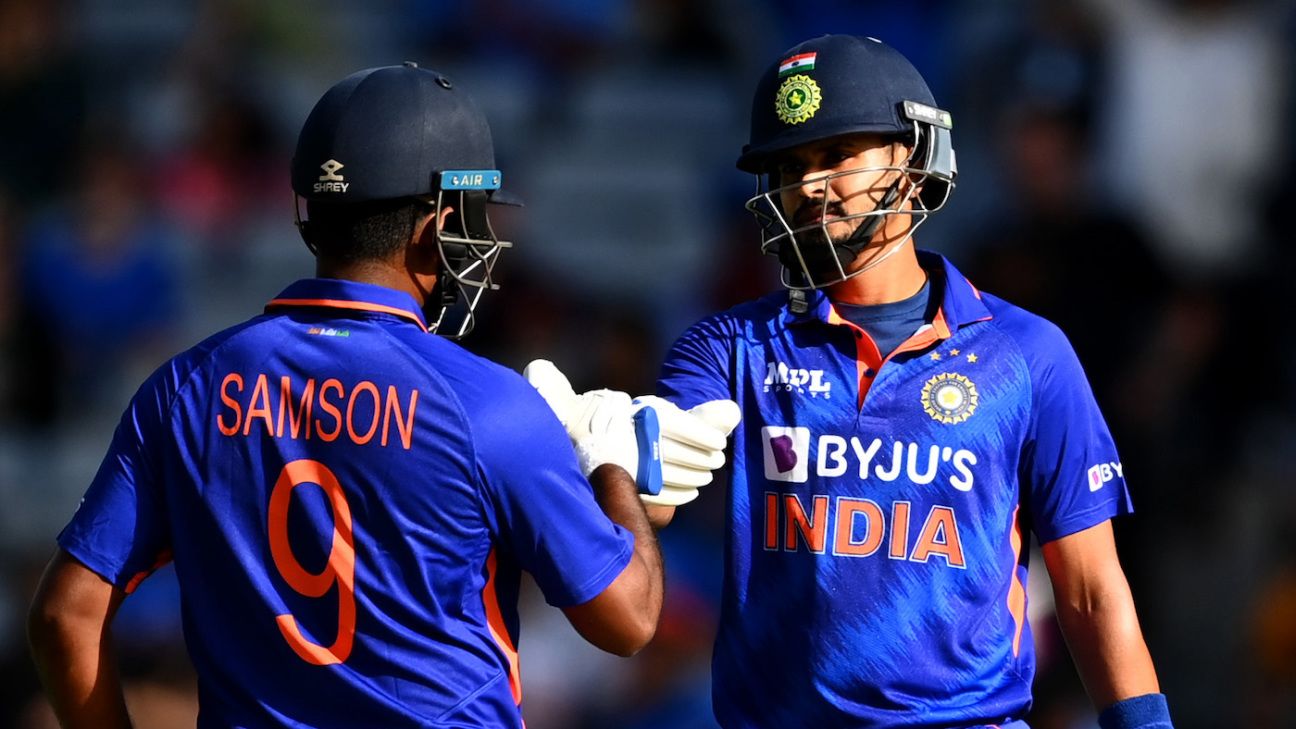 After being put in, Dhawan and Gill set the platform by adding 124 in 23.1 overs, their fourth century stand in nine innings. New Zealand struck back in the middle overs, and for a while, it looked like they might succeed in keeping India inside 300. But Iyer and Sanju Samson provided the impetus with their 94-run stand off just 77 for the fifth wicket. Washington then smashed an unbeaten 37 off 16 balls to apply the finishing touches.

Earlier, a niggle to James Neesham somewhat disturbed New Zealand’s balance as they were forced to play four frontline seamers alongside Mitchell Santner.

With the new ball moving around, Dhawan and Gill started watchfully. They faced 44 dot balls in the first ten overs, and the scoring rate was under four after 14.

There were a couple of moments of intent though. Dhawan used his feet to drive Tim Southee to the cover boundary, and Gill picked up two sixes, chipping Matt Henry over long on and later ramping him over deep third. On the whole, however, the New Zealand seamers hardly bowled any bad balls.

During this period, Gill also got a life. In the tenth over, he went after a full delivery from Henry, only to end up slashing it towards deep third. Lockie Ferguson charged in, put in the dive and just got his fingers underneath the ball. But it didn’t stick.

It was Dhawan who eventually stepped up, hitting Ferguson for back-to-back fours in the 15th over. Three overs later, it took two more fours off Adam Milne, and then reached his half-century, off 63 balls, with yet another four off him. Gill joined the action by hitting Santner for a straight six as India took 34 runs in three overs.

Gill reached his fifty in 63 balls but fell soon after, flicking Ferguson straight to deep square leg. In the next over, Southee had Dhawan slicing to backward point for his 200th ODI wicket, becoming the fifth New Zealand man to achieve the feat.

Those two wickets put the brakes on the scoring rate, with Iyer and Rishabh Pant managing only ten runs from over 27 to 31. Milne could have sent Iyer back when he failed to get the elevation on a ramp shot. But Tom Latham failed to time his jump behind the stumps and grassed the chance.

Pant’s scratchy knock of 15 off 23 came to end when he dragged a short-of-length delivery from Ferguson onto his stumps. Suryakumar Yadav opened his account with a sublime four off the first ball but two balls later, Ferguson had caught him at first slip.

Iyer and Samson consolidated for a bit before opening up. Both batters enjoyed the pace onto the bat and changed the rhythm of the innings with their stroke play. Iyer preferred the aerial route, while Samson hit more along the ground.

Samson fell for a 38-ball 36 but Iyer carried on. Having brought up his fifty off 56 balls, he went on an all-out attack. From the other end, Washington deployed everything from an on-the-up drive to a pull to a falling lap shot to pick up the boundaries.

Iyer fell in the final over for 80 off 76 balls, but India’s late acceleration meant they scored 96 in the last ten overs to post what Washington called “a par total”. They have an unexperienced bowling attack to defend it. Arshdeep Singh and Umran Malik are making their debuts, and there is no sixth bowling option either.

Hemant Brar is a sub-editor at ESPNcricinfo