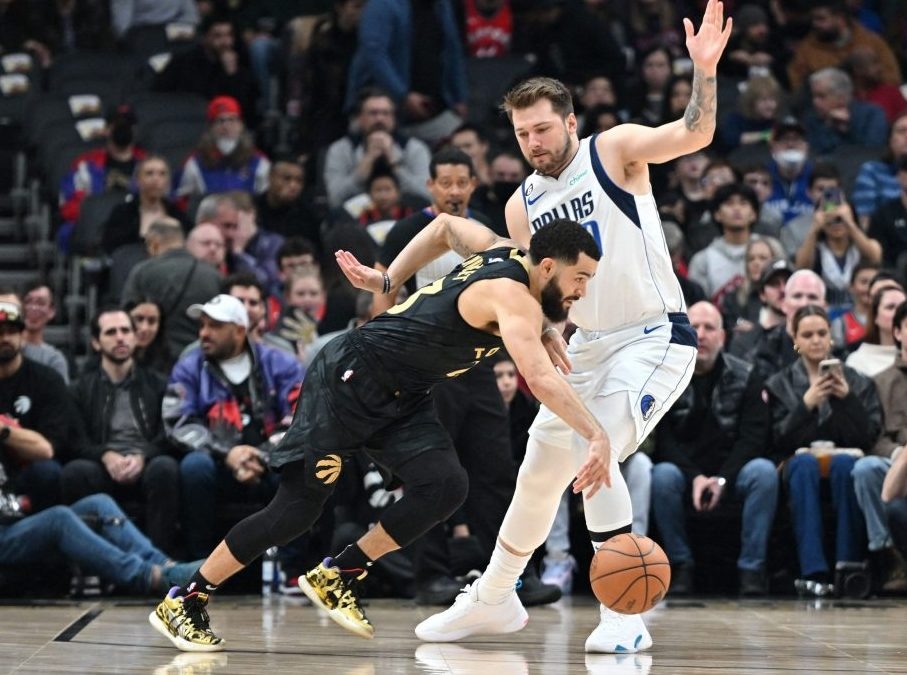 Basketball fans in Toronto got treated to both a rare appearance by superstar Luka Doncic and a thrilling game on Saturday night.

Those on hand for the early tipoff saw only the fourth career appearance in town for perennial MVP candidate Doncic and a down-to-the-wire thriller, ultimately pulled out by the Raptors 105-100.

Led by all-star worthy efforts by OG Anunoby and Fred VanVleet, plus great work off the bench from Chris Boucher, the Raptors prevailed. They also held the great Doncic under his usual production by making life difficult for him whenever he got the ball.

Sure, Doncic got his 24 points and nine assists, but his 15 shot attempts tied a season-low — set earlier this month in a one-point win over these same Raptors.

In a league full of stars, Doncic shines amongst the brightest. At just 23, he already has three All-NBA first team selections under his belt and entered Saturday leading all in scoring at a career-best 34 per game.

In eight games against the Raptors, Doncic had averaged a LeBron James-like 27.6 points, 10 rebounds and 8.3 assists per game, including two triple-doubles.

Raptors head coach Nick Nurse had said before the game the team had a “menu of things” to throw at the Slovenian sensation and they definitely did just that.

“We call a timeout and say ‘we’re going to this’ and it’s in our playbook, defensively,” Nurse said.

“All those are always on the table. We’ve got what we think is a really good game plan tonight for him and for them in totality and we’ll have to see how close that is and how long that lasts and how many adjustments we have to make.”

The Raptors did a solid job on Doncic for most of the night, primarily through the work of defensive terror Anunoby.

Anunoby added 26 points, tied with VanVleet for the game-high, along with 9 rebounds. “He’ll sleep well tonight,” Nurse said of the energy Anunoby had to expend in his 43 tough minutes.

VanVleet added seven assists in his return after missing three of the previous five games.

Boucher had a season-best 22 points, plus 13 rebounds.

The Raptors moved a game above .500 and expect to soon get Pascal Siakam back and hopefully Scottie Barnes not long after that.

Toronto had to unveil its 10th different starting lineup in 19 games this season.