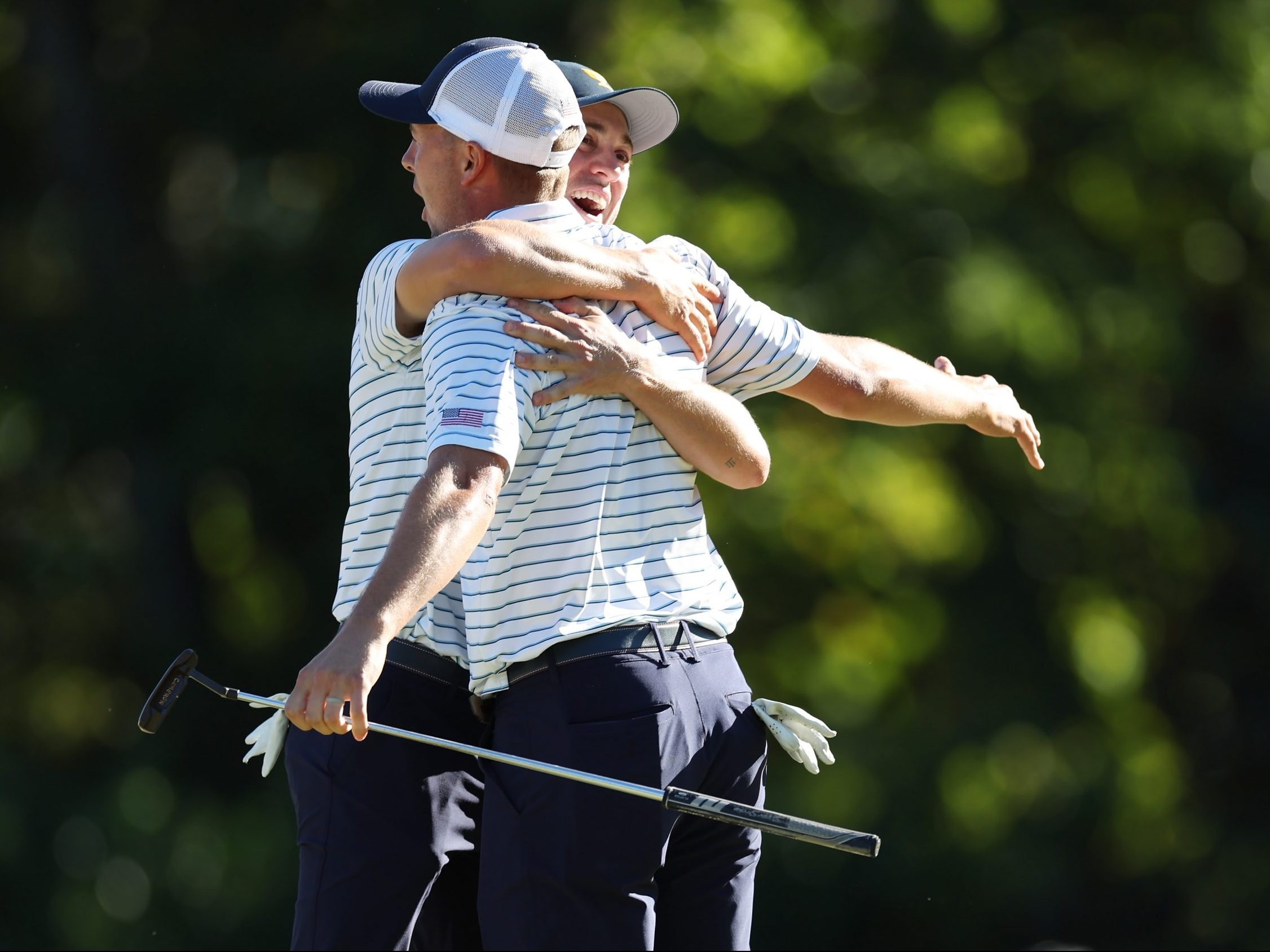 CHARLOTTE, NC — On paper this year’s Presidents Cup looked to be a one-sided affair, turns out it’s not much different on the golf course.

Through two sessions at Quail Hollow in North Carolina, Davis Love III’s team of American stars has lost just a single match and takes a dominating 8-2 lead into the weekend. During Friday’s Four Balls, the Americans continued where they left off on Thursday, winning three matches and tying two.

“There’s a whole lot of points left and we’re not sitting there going, OK, this is great,” Love said. “We’ve seen a lot of big leads lost. We’re going to try to be motivated to play tomorrow and not really talk about the outcome till the end.”

Love is correct in that, mathematically it is not over. Although, it should also be noted that mathematically, the Americans could reach 15.5 points and win the Presidents Cup on Saturday before Sunday singles play even begins, so thorough has been the thrashing.

“The score means we’ve got to get better, and we will. Plain and simple,” International captain Trevor Immelman said. “As far as me saying something to my team, you know, I don’t need to say much. These guys are hungry and motivated. The score line may make you think differently, but these guys are hungry and motivated. They want to be here. They want to compete. Not much needs to be said.”

Team USA’s top pairings took care of business on Friday. For the second day in a row, Xander Schauffele and Patrick Cantlay breezed past their opponents, this time defeating major-winner Hideki Matsuyama and 20-year-old Tom Kim 3&2.

“I think hot starts are really big to match play to get the momentum on your side and force opponents to do something to catch back up,” Cantlay said. “I think getting out to a lead in match play is huge, and we did a great job of that today.”

“We did an unbelievable job of picking the other one up when the other one wasn’t necessarily in the best position,” Thomas said. “That’s why we love this format, best ball. We feel like we have the firepower. We can make a lot of birdies.”

The International point on Friday came courtesy of two halved matches. Sungjae Im and Sebastian Munoz tied Scottie Scheffler and Sam Burns after drawing even on the 17th hole, and Mito Pereira and Christiaan Bezuidenhout finished square versus Kevin Kisner and Cameron Young.

After trailing for most of the match, the Canadians pulled even on the 13th hole when Conners rolled in a 32-foot birdie after battling his putter for two days.

After winning the 17th hole with a Homa birdie putt, the Americans headed to the last with a 1-up lead. For the second consecutive day, Pendrith was faced with a must-make putt on the 18th hole to give his team a chance to earn a tie. After missing on Thursday, the big-hitting 31-year-old found the bottom of the cup with his 13-foot birdie putt to put pressure on Homa to match.

With players and captains from both teams surrounding the green, Homa rolled in the winning putt.

“Money cannot buy that feeling,” Homa said. “And that was something that I will remember forever, and I will tell anybody who ever wants to hear about it how that felt.”

Saturday will see two sessions of play with foursomes in the morning and four ball in the afternoon. Pendrith will sit out the first session. Conners will be paired with Day 1 partner Sungjae Im in a rematch versus Spieth and Thomas.