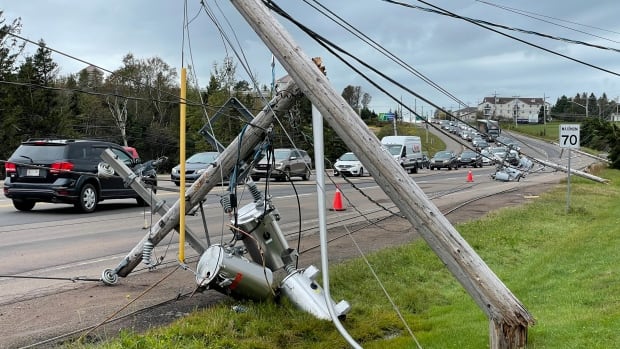 Maritime Electric is close to restoring electricity to one third of its customers following post-tropical storm Fiona’s strike on PEI over the weekend, but no closer to providing an estimate of when the work would be done.

Fiona hit PEI early Saturday morning, leaving widespread destruction and power outages. As of Wednesday morning, about 57,000 Maritime Electric customers were still in the dark — with power restored to only about 26,000 customers on day five of the outage.

With crews about to return to work Wednesday morning, spokesperson Kim Griffin said things are particularly bad in the eastern part of the province.

“We don’t have all the essential services on. That’s certainly something that our crews are focusing on,” said Griffin.

“They worked until about midnight last night, many of them, before they timed out, and expect to be on the road maybe 6:30, 7, this morning.”

Inspections Tuesday found more broken poles than expected, and the count is now 475.

The rain yesterday slowed work but the weather forecast is more favorable today. Streets will be closed in some parts of Charlottetown Wednesday in order to allow crews the space to work.

Maritime Electric still can’t give any estimates on when power will be fully restored, but Griffin is hoping to provide a real update on this Thursday or Friday.

An aerial view of Fiona’s path of destruction in PEI

This drone footage gathered by CBC video producer Shane Hennessey on Sunday shows the extensive damage caused by post-tropical storm Fiona in parts of the Island.

The Canadian Red Cross is urging Islanders who need assistance in the aftermath of the storm to register.

Bill Lawlor, provincial director for PEI and New Brunswick, said even in a closely-knit province like PEI there are people with health and housing challenges who are isolated.

“We tend to think that’s not the case. You know, everybody knows everybody, it’s a nice, friendly atmosphere, friendly province,” Lawlor said.

Finding those people who need help can be a challenge. The Red Cross is working with provincial officials and doing wellness checks on those the province is aware of. Even as those people are contacted, it can be difficult to determine their needs, Lawlor said.

“You find that someone who says they’re fine, [but] they haven’t eaten for a day. They don’t know where they’re going to get their next meal,” he said.

Islanders who need assistance, even if they are just feeling isolated and would like wellness checks, can register with the Red Cross online or by calling 1-800-863-6582

PEI Ground Search and Rescue is also traveling across the province, knocking on doors to check if people are OK.

Students may need to move temporarily to other schools, and some may move to online learning.

Pat and the Elephant running again

Pat and the Elephant, a transportation service for Islanders with mobility issues, returned to full service on Monday, but co-manager Halbert Pratt said there has been difficulty reaching some clients.

“There’s so much trees and wires and stuff down you can’t seem to get from Point A to Point B in a straight line anymore,” Pratt said.

He said communication continues to be a problem as well.