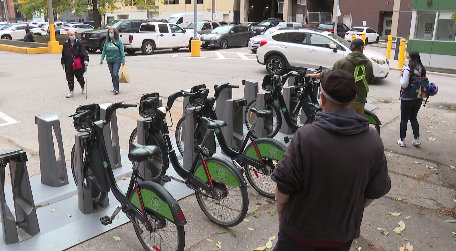 A Toronto man is voicing concerns about pedestrian safety and accessibility.

Brian Provini, who lives near Yonge and Wellesley streets, says a Bike Share rack located in the Wellesley car park is causing safety hazards and making it difficult for pedestrians with disabilities to pass through.

“This is a hazard,” Provini told Global News, adding “pedestrians should be our priority.”

The area gets a lot of foot traffic, as people often cut around the parking lot to get from Wellesley to Maitland Street.

Over the past several months, Provini says he’s witnessed all kinds of people conflicted when faced with the Bike Share station.

“When you see able-bodied people trip and fall, when you see the infirm, people with disabilities or illnesses having to go around … the city thinks that’s alright,” he said. “That to me indicates the city does not care.”

The bike unit sits beside parking spots designated for those who are disabled, forcing them to go around the rack.

“They are mobility challenged. Why should they have to walk 25 meters?” Provini asked rhetorically.

Dave Core parked in the lot as it took his wife to nearby Holland Center at Sunnybrook Hospital.

“As somewhat frequent visitors to the Holland Center where the majority of people have had many operations on their knees and have mobility issues, it is difficult,” Core said.

“The space here is not adequate to get around.”

On one side of the bike rack the space is narrow and would be challenging for someone with a walker or wheelchair to pass through. The other side of station has more space, except pedestrians are often met with oncoming traffic from vehicles exiting the car park.

“It’s about accessibility for everybody, and it’s the principle behind it,” says Anthony Frisina with the Ontario Disability Coalition. “Inclusive for all means everybody, everywhere.”

Bike Share Toronto tells Global News before installing the station, staff “ensured that the position allowed for a clear and safe path into the car park, as well as an alternate entrance on the west side of the lot.”

The company adds it is welcoming feedback from the public to identify options that would provide easier entry into the car park.

As for Provini, he’s hoping the station will be moved to the south east end of the parking lot, away from busy Wellesley Street.

In the meantime, the office of Robin Buxton Potts, who represents the ward, tells Global News the city councilor is looking into the matter.