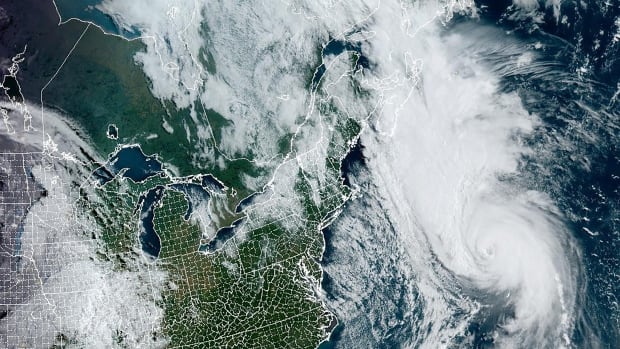 Thousands of Maritime Electric customers are without power in PEI as Hurricane Fiona makes its approach toward the Island.

A hurricane warning is in place for all three counties in PEI and the nearby Magdalen Islands, with Category 1 hurricane winds and torrential rains expected for Friday night, according to Environment Canada.

As of 11:30 pm, over 7,000 PEI homes were without power, as shown on the Maritime Electric outage map. Most of the affected homes are in the Charlottetown area and Kings County in the east.

Environment Canada expects Kings County to see the most rain, with Queens and Kings counties likely to experience the worst winds.

In Nova Scotia, there were over 130,000 households without power at around the same time.

Maritime Electric spokesperson Kim Griffin told CBC News the utility expected power outages Friday night as well as Saturday, but that it will be hard to determine when power would be restored. Griffin said it’s possible some customers could still be without power Sunday.

Rainfall, wind and storm surge warnings were also in effect for all of PEI The 8:27 pm AT forecast warned Islanders to expect the following conditions:

Earlier on Friday, PEI’s Emergency Measures Organization had warned that the window for Islanders to take steps to avoid major damage was getting much smaller.

She said people living on the North Shore area whose properties have experienced storm surges and flooding before should seek higher ground if possible. And she said there is potential for north-facing windows to blow in, or for debris to break them, which is “not something we’ve traditionally” had to worry about in Atlantic Canada.

Mullally said the province plans to set up an online and telephone reporting tool so that, starting on Sunday, Islanders can report damage to critical infrastructure like roads and bridges. Obstructed or damaged roads can be reported by calling 511 or these numbers, the province said in a release.

“Rain will become heavy later this evening, with the most intense rainfall occurring overnight and Saturday. As for amounts, a widespread 50 to 100 mm is possible across the Island including what has already fallen, with amounts of 150 mm possible toward the storm’s path CBC meteorologist Jay Scotland said.

Rain will also be intense at times, with as much as 10 mm to 25 mm falling per hour during the height of the storm.

“Based on the current track, a strong northerly wind will develop this evening, with potentially destructive 100 to 140 km/h or higher gusts possible overnight through Saturday morning,” he said.

“These strong northerly winds will begin to ease gradually Saturday afternoon, but they remain quite strong until early evening.”

An Environment Canada statement issued at 8:40 am AT gave more erosion context: “The western Gulf will see waves from the north up to 8 meters in places, which will probably cause significant erosion for north facing beaches of Prince Edward Island. Iles- de-la-Madeleine will also see some coastal erosion from waves.”

“Rainfall rates in excess of 25 mm per hour are possible beginning tonight and will continue into Saturday,” the agency said.

Winds in eastern Cape Breton and southwest Newfoundland east of the eye will likely get gusts to near Category 2 hurricane level, which is 160 km/h.

“Over PEI and parts of northern Nova Scotia, the winds will be much colder and from the northwest and could gust up to 140 or 150 km/h.”

Environment Canada was blunt about the possible impact.

“These winds could cause significant tree fall and result in extended utility outages. Damage to building cladding and roofing material is likely, including structural damage in certain cases. Winds of this strength could cause windows to break and tear off large overhead highway signs.”

The warning also said Fiona “will result in damage to docks and breakwaters. Significant shoreline erosion and large waves are expected where winds blow onshore.”

People who must venture outdoors during the storm are being warned to watch out for wind-blown debris and downed power lines, among other risks.

“Stay away from the shore — the combination of surge and large waves could result in dangerous rip currents and the risk of being pulled out to sea,” Environment Canada said.

No federal help requested yet

Fresh out of a cabinet briefing on the storm, provincial Justice and Public Safety Minister Darlene Compton said it’s too soon to talk about whether PEI will request federal help for a cleanup.

“We’ll exhaust all of our resources in PEI [before we] reach out to our federal counterparts,” she told CBC News Network at midday Friday.

“As Islanders, we band together,” she added. “This is not our first storm and won’t be our last.”

Her advice for residents: “Make sure you check on your neighbours, [see] that they are safe or reach out to the province to make sure that they get what they need.”

Because of Fiona, the Confederation Bridge is warning of travel restrictions, starting tonight around 9 pm and lasting until early Sunday morning.

So far, Air Canada has canceled one of its Friday flights into Charlottetown, AC1570 from Montreal, usually expected at 11:30 pm All Air Canada flights to and from Charlottetown scheduled for Saturday are off, as well as the airline’s first Sunday morning flight.

For more information on what disruptions are being announced due to the storm, click here: Hurricane Fiona: What’s open and closed on PEI

Officials are urging people in Atlantic Canada in the path of Hurricane Fiona to make emergency preparations, including having enough food and water on hand for several days.

According to the National Hurricane Center as of 8 pm AT, Hurricane Fiona was about 345 km southeast from Halifax with maximum sustained winds of 205 km/h and was a Category 3 storm.

Earlier on Thursday the storm passed through the Caribbean islands causing severe flooding and killing at least eight people in Puerto Rico.