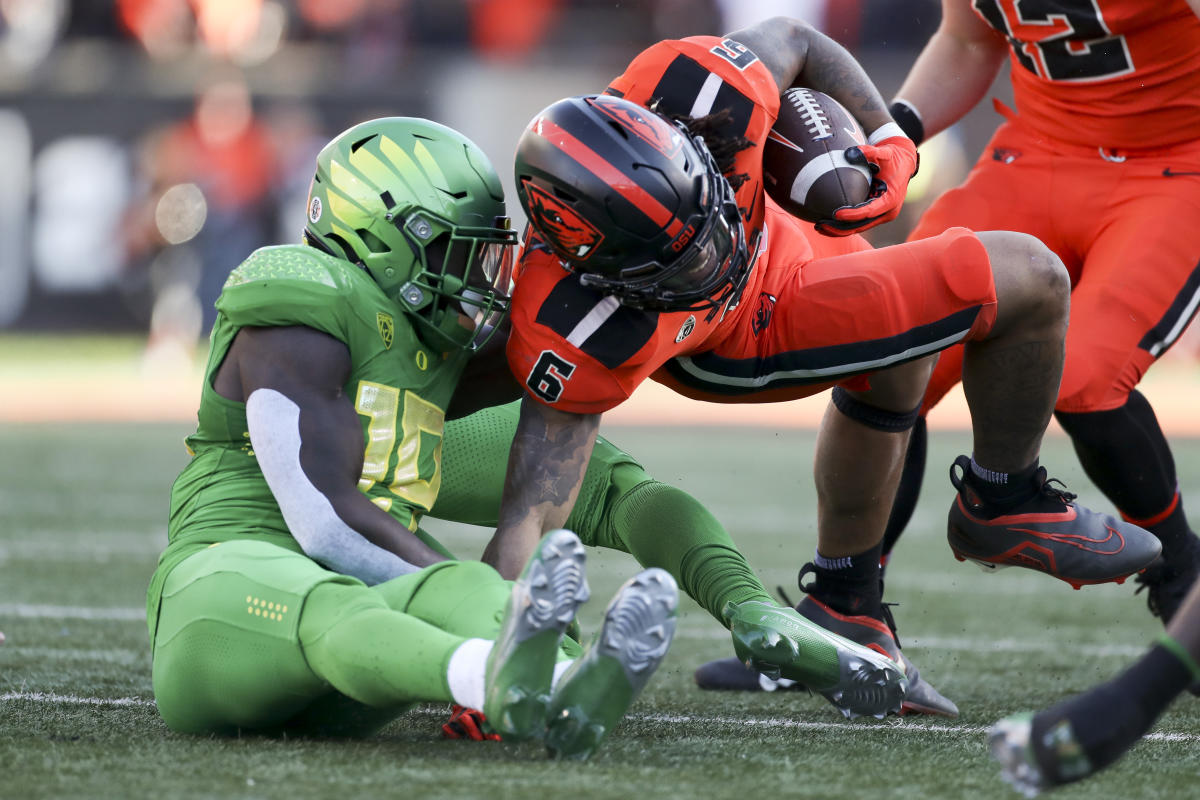 With a trip to the Pac-12 title game at stake, No. 9 Oregon had an all-time collapse at the hands of rival No. 21Oregon State.

Oregon had a 21-point lead with 4:46 remaining in the third quarter, but allowed Oregon State to storm back and win 38-34 in stunning fashion.

With a win, Oregon would have locked up a spot in the league championship game against USC next weekend. Instead, the Ducks now have to sweat out the result of Saturday night’s Washington vs. Washington State game at Pullman.

And they have nobody to blame but themselves.

In the fourth quarter alone, Oregon State scored three touchdowns in a span of 5:13, flipping what was a 34-17 lead for Oregon into a 38-34 advantage for the Beavers. During that stretch, Oregon’s punt fumbled a snap inside the Ducks’ 5-yard line, gifting the Beavers a touchdown.

And then, on the ensuing possession, Oregon went for it on fourth-and-1 from its own 29-yard line and could not pick up the yard it needed. Four plays later, Oregon State was back in the end zone and improbably had a 38-34 lead with 8:11 to play.

From there, Oregon’s offense put together a long drive. But the Ducks couldn’t finish it.

Oregon marched all the way down the field and had four shots at the end zone from the 5-yard line. The first three plays were runs, and the Ducks could only get to the 2-yard line. On fourth-and-goal, Bo Nix rolled right but his pass fell incomplete, giving the ball back to the Beavers with 2:58 remaining.

Oregon State completed only six passes all game, so Oregon knew what was coming next. But the Ducks still couldn’t stop it. Oregon State ran it three straight times up the middle and picked up the game-sealing first down when Deshaun Fenwick plunged forward for two yards on a third-and-1 play from the 12.

With the first down, Oregon State was able to run out the clock and put a massive dent in Oregon’s hopes of playing in the Pac-12 title game.

Oregon led just 14-10 at halftime but quickly built that lead up to 31-10 with 4:46 remaining in the third quarter thanks to a pair of turnovers by Oregon State.

But the Beavers wouldn’t want to. They continued to run the ball down the Ducks’ throats. OSU quarterback Ben Gulbranson was just 6-of-13 passing for 60 yards with two interceptions on the day, but the Beavers put up 268 rushing yards in the win.

Gulbranson had two short touchdown runs and the combination of Damien Martinez, Jam Griffin, Fenwick and Isaiah Newell combined for 252 yards on 33 carries. Newell scored twice in the fourth, including the game-winner with 8:11 to play.

Run defense was an issue for Oregon all year, and it showed up yet again on Saturday. And when Oregon needed just five yards in the guts of the game to get in the end zone and retake the lead, Oregon State’s defensive front stepped up when Oregon’s offensive line could not.