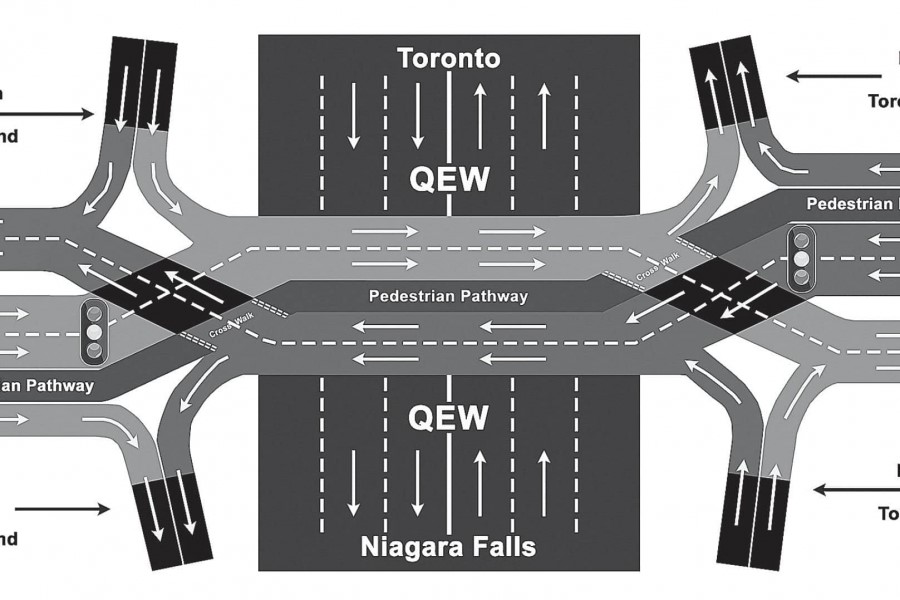 It’s a first for Ontario roads, with the province set to open a new style of highway interchange called the ‘Diverging Diamond’ at the Queen Elizabeth Way (QEW) and Glendale Avenue in St. Catharines next week.

The new interchange will officially open to traffic on September 26, 2022.

Construction has been underway at the QEW and Glendale Avenue since April 2021.

According to a website for the project, the aim is to “allow for performance improvement by reducing vehicle conflict points along with allowing unrestricted turning movements.”

“It accomplishes this by reconfiguring the traffic lanes to allow for direct access to all four directional highway ramps (two off-ramps, two on-ramps),” the website says.

The interchange’s opening represents the first of its kind anywhere in the province.

Once motorists are shifted onto the newly built overpass, work crews will begin dismantling the old Glendale Avenue bridge, which is scheduled to finish by the end of 2022.

New project to include roundabout

The opening of the new diverging diamond interchange is just part of a major reconstruction of roads in the area.

The construction project also includes the installation of a new roundabout at Glendale Avenue and York Road, which is scheduled to be completed in the summer of 2023.

In addition, crews are building a new connection from Glendale Avenue to Airport Road, making it easier for traffic exiting the QEW to get to the Town of Niagara-on-the-Lake.

“The new Airport Road connection from Glendale Avenue allows for a direct route for traffic to the historic Old Town Niagara-on-the-Lake tourist area by removing the need to navigate left and right turns through two intersections within proximity to one another and by diverting some traffic from the Glendale Avenue/York Road intersection,” the project’s website says.

All construction in the area is scheduled to finish by next summer.