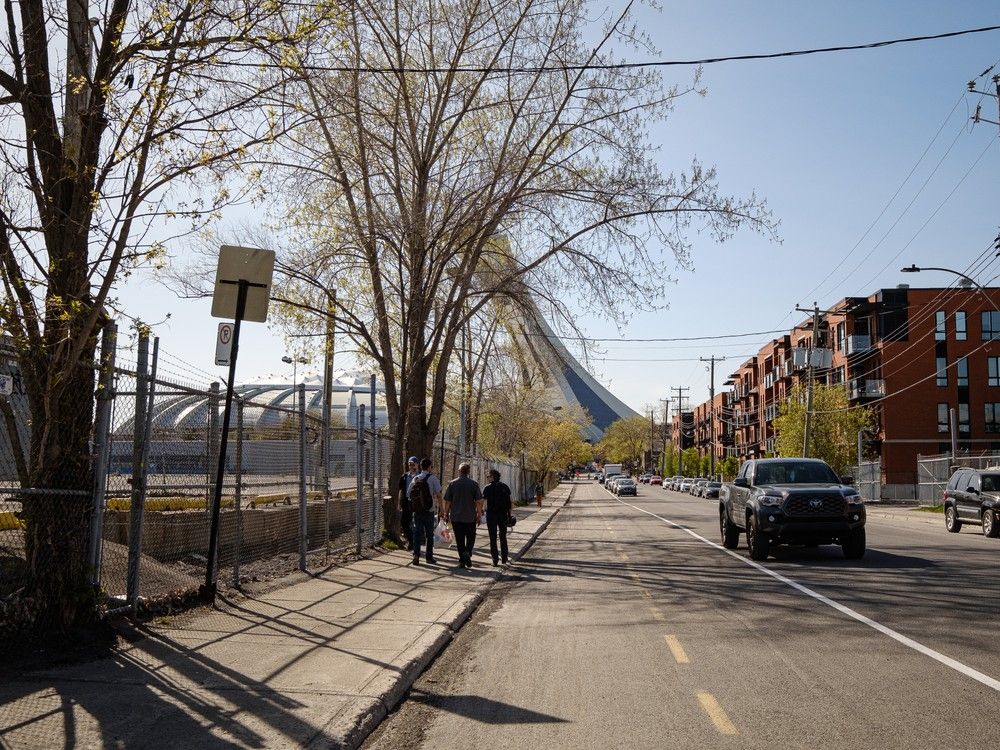 Montreal’s public consultation office is giving a thumbs-up to a plan to redevelop the site that formerly housed Pro Gym near the Olympic Stadium, but it recommends the city and Mercier—Hochelaga-Maisonneuve borough come up with guidelines to support their development vision for the neighbourhood.

“The re-qualification of 4500 Hochelaga St. is a privileged opportunity to implement planning and sustainable development principles,” a report released by the Office de consultation publique de Montréal on Friday morning says of the borough’s draft bylaw setting the parameters for developer Rachel Julien’s project for the block at Hochelaga and Bennett Ave.

“It is proposed to build a living environment marked by social diversity, diversity of uses, a varied and quality housing offer, a diversified commercial and cultural offer, increased greening and a commitment to eco-responsibility.”

Rachel Julien’s Canoë project calls for the demolition of the commercial building that housed Pro Gym at 4500 Hochelaga, followed by six phases of construction of mixed-use buildings that would range in height from one to 10 storeys. The development would include 928 housing units, including 205 apartments, 583 condos and 140 co-operative housing units, a medical clinic, stores, art gallery, a cultural and commercial street, community hall and urban agriculture.

About 600 people participated in the OCPM consultation in May. The OCPM says it received about 200 briefs from the public.

The project was generally well received by those who participated in the consultation, the report says, because most participants were favorable to the mix of commercial and residential uses, the developer’s plan to offer different types of housing for different clientele and its plans to add green space.

However, the OCPM recommends the borough “clarify” its draft bylaw for the redevelopment of the block to “ensure that the construction of the site will be similar to the project presented at the consultation conducted by the OCPM,” the report says.

For example, the draft bylaw “does not distinguish between heights of the various buildings to be constructed on the site,” the report says. The OCPM also says the draft bylaw should specify the permitted building density being authorized, and it should provide illustrations of the expected architectural treatment. The OCPM also recommends including “innovative” residential waste management as a criterion in the draft bylaw and examining the possibility of including criteria aimed at improving sunlight on the facades of interior courtyards.

“The committee therefore recommends the adoption of the bylaw allowing it to be carried out, but stresses the importance of making changes to it,” the report says. It makes 12 recommendations.

However, the OCPM also notes that Mercier—Hochelaga-Maisonneuve borough presented a document with “an ambiguous status” at the consultation to outline its plan to develop the Bennett-Letourneux sector south of the Olympic Stadium. The document’s value as a planning document is ambiguous, the report says, “due to the fact that it is absent from the borough chapter of the Urban Plan of the city.”

As well, the OCPM notes “this document is silent on the guidelines for development of buildings to be re-qualified, other than 4500 Hochelaga St.,” and silent on the means to develop streets dedicated to cultural, institutional, community and other uses .

“For the commission, this vagueness raises a difficulty with regard to the consistency expected for all sector re-qualification projects,” the OCPM says in the report.

“During the consultation, folks lamented that the borough’s current approach is based, in their opinion, on piecemeal planning, parcel by parcel, to the detriment of sustained integrated development through an overall vision. The commission considers that the development parameters for all buildings likely to be re-qualified in the sector should be defined and included in the framework city ​​and borough regulations.”

The report also recommends the city and the borough use all means at their disposal, including the city’s ability to use a right of first refusal on private properties that are sold, to identify and acquire sites that can accommodate social housing.