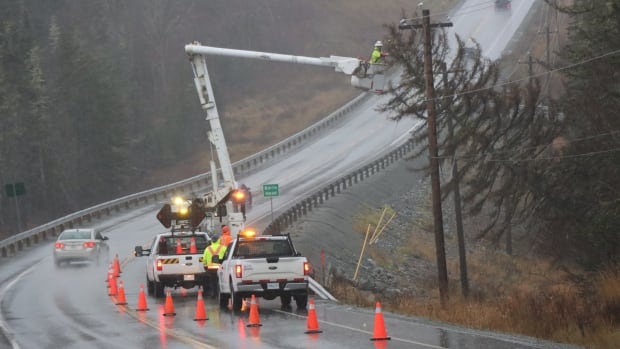 Thousands of Nova Scotians lost power on Friday night amid high winds and rain as Hurricane Fiona approached and officials warned that the lights, for some, might stay out for a long time.

Fiona could be “a Dorian-level event,” Nova Scotia Power storm lead Matt Drover told reporters earlier in the day, referring to the 2019 storm that knocked out electricity for some in the province for a week.

By 11:59 pm, there were more than 153,000 customers without power, according to the utility company’s online outage map.

Many of those outages were because of high winds and rain, according to the map. It said the power could be back on by Saturday for some, while others may need to wait until Wednesday.

“When the winds do get above [80 km/h]we will stand the buckets down,” he said at a briefing Friday afternoon. “We can still get out and do assessments of what the damage may be, but we won’t actually be able to get the buckets up in the air until the winds get below 80.”

Fiona is expected to make landfall early Saturday as a hurricane-strength post-tropical storm. Environment Canada says wind gusts could reach 120 km/h or higher in parts of Sydney and Halifax.

More than 800 Nova Scotia Power workers are in the field ready to restore power and “hundreds more behind the scenes [are] co-ordinating that effort,” Drover said.

Most of Nova Scotia’s power infrastructure is above ground, with more than half a million poles throughout the province, Drover said, though some are some underground.

“Especially in the province of Nova Scotia where there is a significant amount of rock in the ground, it is costly to install below-ground lines.”

“And when outages do occur — underground systems aren’t outage-free — when there are issues with those systems it can sometimes take longer to restore those outages, it takes a while to find where the problem is.”

Even though crews won’t be able to restore lines in very high winds, Drover encouraged people to report downed lines.

“If you see wires down, don’t go anywhere near them,” Drover said.

He said hospitals and public health areas would be the priority for restorations.

“And then we’ll get into communities and sub-communities from there and individual houses at the end of the restoration,” Drover said.

Stay away from the sea

“It’s going to be a large storm. We’re asking all Nova Scotians to be safe, have a 72-hour preparedness kit and check on neighbours,” Jason Mew, director of the Nova Scotia Emergency Management Office’s incident management division, told reporters .

Erica Fleck, assistant chief of emergency management for Halifax Regional Fire and Emergency, said the boardwalk on the downtown Halifax waterfront and Peggys Cove will be barricaded later on Friday.

“It will be really unsafe as well as any area near the water we would really prefer people to stay inside and be safe,” Fleck said.

Christina Lamey, a spokesperson for the Cape Breton Regional Munipcality, said Center 200 will be open later Friday night to people who may feel unsafe in the storm. Center 200 will open at 8 pm

“If people could come with their own supplies as much as possible, that would be good,” Lamey said.

The Community Homeless Shelter on Townsend Street in Sydney will be open overnight through the storm for individuals experiencing homelessness.

Lamey and Fleck said comfort center locations will be announced as soon as it’s safe to travel again. Lamey said people should not travel during the storm.

Membertou School in Cape Breton will open as a warming center in case of power outages, the Membertou Development Corporation told CBC News in an email.