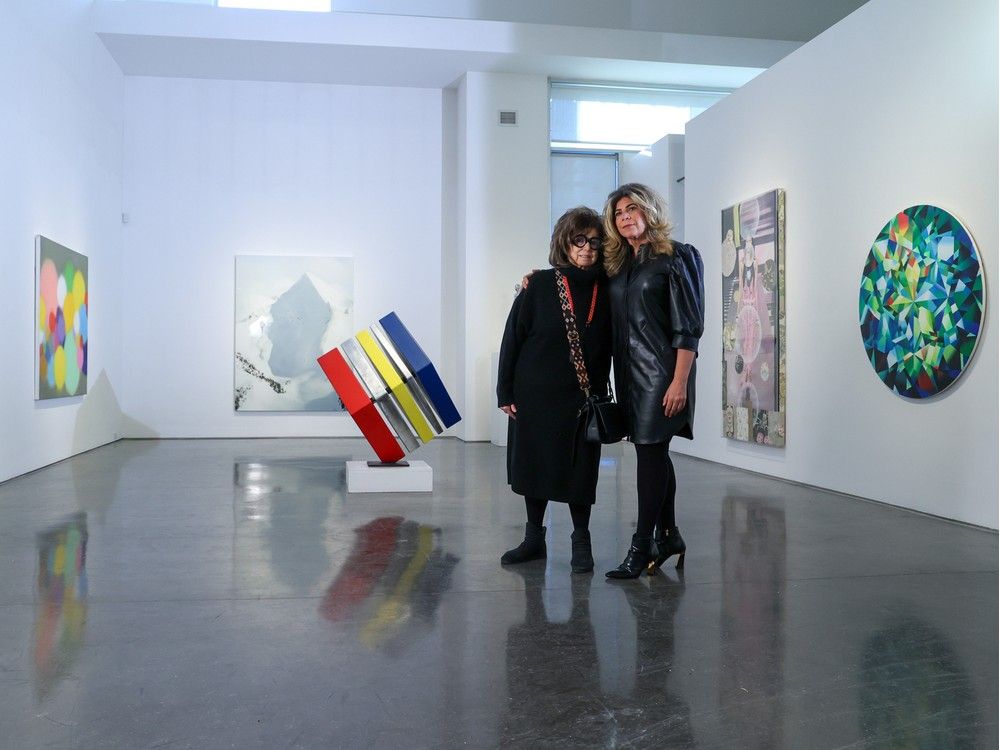 The column outlined the creation of the studio and the vision behind it. It was at the site of the old Dominion Bridge Company, which Tousley described as looking “a bit like New York’s SoHo or London’s Wapping district.” It was also the former studio space of painter Helen Zenith, who co-founded Newzones with her daughter Tamar.

The headline, however, was somewhat blunt: “It may be crazy – but city artist opens gallery.”

Twenty-five years later, Herald columnist Valerie Fortney wrote again about the gallery. The headline – Mother-daughter made ‘crazy’ art gallery idea work – suggests a running theme in the coverage of Newzones, or at least in the Herald’s headlines for the coverage.

If not outright ‘crazy,’ the creation of Newzones was certainly a bold move. Calgary, like much of Canada, was in the midst of a recession in 1992. Tamar had just graduated from McGill University with a business degree but had been around art and artists for most of her life and decided she would join her mother in the venture .

“One of the art dealers at that time said ‘she must be crazy,’ ” says Helen. “Galleries were closing. Promoting contemporary art has always been an issue here. We’re up against western art.”

But Newzones survived and thrived. Within five years, the Zeniths had moved operations to its current home in the Beltline, setting up shop in a specially designed space on 11th Avenue. Earlier this week, Newzones officially launched 11,104 Days: From Artists to Zenith, a group exhibition that celebrates its past and future. Some pieces are drawn from the Zeniths’ private collection, including works by Charles Arnoldi, Jack Bush and Dan Christensen, but many are new works from artists Newzones represents.

Many of the artists have stayed with the Zeniths from the start. The first exhibit in 1992 featured the work of Toronto artist Christopher Kier. Helen was showing some of her art in the same Toronto gallery as Kier at the time and was a fan of his work.

“I didn’t know him,” Helen says. “He had major, big encaustic paintings which, you have to remember, in 1992 was way out there. I just loved his work. I called him up and he said ‘Well, you have a nice voice so I think I’ll go with you.’ He sent out two paintings.”

“Those were the risks that artists would take when they took on a new gallery,” adds Tamar. “Now, I think it’s a lot easier to do due diligence because there is a whole world of Googling and sending out a DM and saying ‘Hey, do you know this person? Are they reputable?’ ”

The Zeniths proved to be not only reputable but key in developing the careers of dozens of contemporary artists, giving them national and international profiles.

That includes the late Cathy Daley, a Toronto-based artist and longtime instructor at OCAD University who died in early 2022. She was one of the first to join the Newzones roster, connecting with the gallery through Kier. While represented by the Zeniths, she showed at art fairs in New York, Paris and London. Her work is in the permanent collections of the National Gallery of Canada, the Canada Council Art Bank and the Art Gallery of Ontario. She became renowned for her “little black dress” drawings among other series. After she died, Forbes magazine wrote: “From high heels to tutus, flowing dresses and long, black gowns, Daley was a master of the female gaze, capturing high fashion in its most elegant form.”

“We value relationships,Tamar says. “I always say when we take on a new artist the relationship is like a marriage. Our goal is not to do one or two shows. It’s to do, if it’s every two years, 15 shows at this point. There have been a few who have come and gone but on a whole, most of the people that we have represented, we have represented long term.”

Of course, much has changed in Calgary’s galleries in the past 30 years. But when it comes to contemporary art, a lot of the change has come in the past decade. Helen has been a long-term board member of Contemporary Calgary, which opened its doors at the old planetarium in 2020. She is also good friends with Jim and Susan Hill, who founded The Esker Foundation, a privately funded contemporary art gallery, in 2012 .

“They came to our old space one day and started looking at some of our artists and started collecting and, over the years, always talked about wanting to give something back to the community,” says Helen.

The landscape has certainly changed, but commercial galleries such as Newzones laid the groundwork.

“For the first 20 years, it was the dealers and the galleries who were the ones doing the job of educating and promoting,” says Tamar. “We didn’t really have a contemporary gallery or contemporary museum. Glenbow did a great job but it wasn’t their main focus.”

“… It has changed. If anything, it’s become that much better. It’s nice, people are helping us out. But for the first 20 years, it was the commercial dealers doing the hard work.”

11,104 Days: From Artists to Zenith is now open at the Newzones Gallery of Contemporary Art. Visit newzones.com.