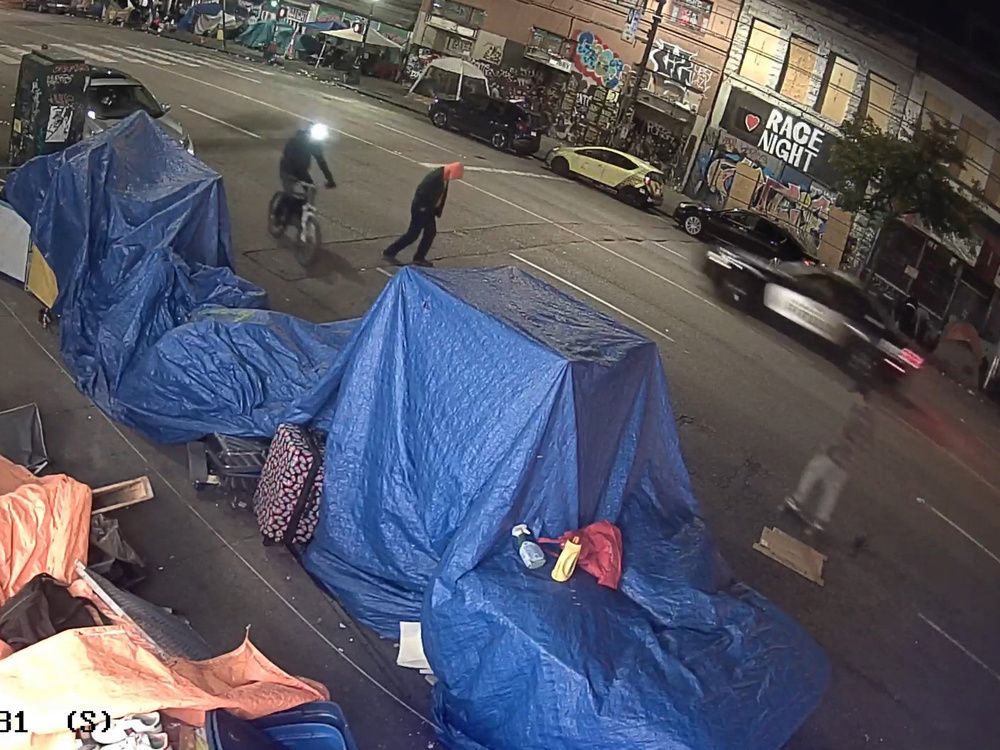 The man in dark pants and jacket stands hunched over in the eastbound lane of East Hastings Street, a dozen or so meters west of Main Street.

A taxi passes, but the man doesn’t move.

Seconds later, a VPD cruiser slams into him, knocking him onto the hood of the car before sending him flying several meters.

Footage of the collision was captured on security cameras installed by an area resident about a year ago in an effort to provide additional security on the block.

Scott Gilbert, the owner of the cameras, said police often ask for his footage.

Scrutiny of the collision is intensifying after the Vancouver Area Network of Drug Users posted video clips and still images on Friday of the moments before and after the impact and encouraged witnesses to come forward. The pedestrian was left with serious injuries, but has been released from hospital, police said.

The Independent Investigations Office of BC, the province’s civilian-led police oversight agency, is investigating.

“VANDU is helping to mobilize a community investigation into the VPD vehicular assault on Sept. 30 because time and time again in the Downtown Eastside, the VPD manage to skirt all accountability for their near-daily misconduct in the neighbourhood,” Vince Tao, community organizer for VANDU, said in a statement.

“We want justice for the still-unidentified man struck by police,” he said “and for some consequences for the offending constables.”

Tao said VANDU and the City of Vancouver collaborated in 2010 to study pedestrian safety in the Downtown Eastside. “We successfully advocated for the reduction of speed limits … to 30 km/h. Nevertheless, the neighborhood remains a hot spot for pedestrian injuries because this speed limit is hardly enforced.”

“Police officers are allowed to use their onboard laptops as they’re working,” said Sgt. Steve Addison of the VPD, said in response to suggestions that the officers may have been involved in distracted driving.

“It’s acceptable,” Addison said of the practice of officers using a computer while driving.

“I would hope that the IIO investigation would look at a variety of things,” Addison said, “including why there was a man standing in the road in the middle of the night, apparently motionless. … We’ll leave it to them to find out the details.”

The IIO is asking any person with relevant information or other video footage to contact its witness line toll-free at 1-855-446-8477 or by the contact form at iiobc.ca.

With files from Sarah Grochowski