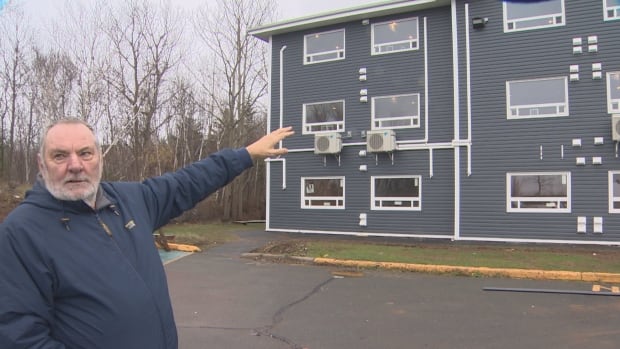 The first tenants of a new supportive housing project could begin to move in before Christmas now that renovations on the old Travelodge Suites in Dartmouth, NS, are almost complete.

Work is underway to identify who will live in the building renamed the Overlook and also hire staff who will provide round-the-clock supports for residents.

“People who are living in horrible conditions are going to have the opportunity to live in something that is much nicer,” said Jim Graham, the executive director of the Affordable Housing Association of Nova Scotia.

The organization bought the building in Dartmouth last fall with help from federal government funds. It will eventually accommodate between 62 and 65 people.

The project aims to house people experiencing homelessness who also have acute problems such as addictions and mental health challenges.

A nurse, addictions counselor, personal care staff and housing support workers will be among the professionals in place to help people succeed in their new surroundings.

There will also be a pop-up pharmacy and doctors will be on site at certain times.

The model, based on a supportive-housing strategy, is a first for Nova Scotia and comes at a desperate time for many during the housing crisis.

“I never dreamed we would have something of this scale,” Graham explained. “That is thanks to government funding between the Rapid Housing Initiative and the province’s commitment to stay in the delivery model over a long period of time. It’s huge.”

Graham said the approximately $12-million project, which includes about $3 million in upgrades, should be complete by Dec. 12.

Once the building gets the all clear, it will be about another week before people will be able to move into private one-bedroom and bachelor units equipped with fridges, microwaves and a hot plate.

There is also common space, a library and program space.

The North End Community Health Centre, which is going to provide the 24/7 supports, has been planning the opening for a number of months.

It already has a core group of about six employees working on the Overlook, named for its views of the region, and is now hiring more staff.

“If anyone was to go to our website, they would see there are probably fourteen openings right now. We have been interviewing for over a week now so we hope to have those staff hired and then trained very quickly,” said CEO Marie-France LeBlanc.

The initial plan is to move between 10 and 15 people into the Overlook when it is ready and then gradually add more residents, she said.

There are strict criteria to make sure those moving in are the ones who need the programming the most.

Graham said supply chain issues have made it difficult to get some of the materials and appliances.

Now those are all in place and opening is within sight, he describes the project as significant for the region where the Affordable Housing Association estimates around 700 people are currently experiencing homelessness.