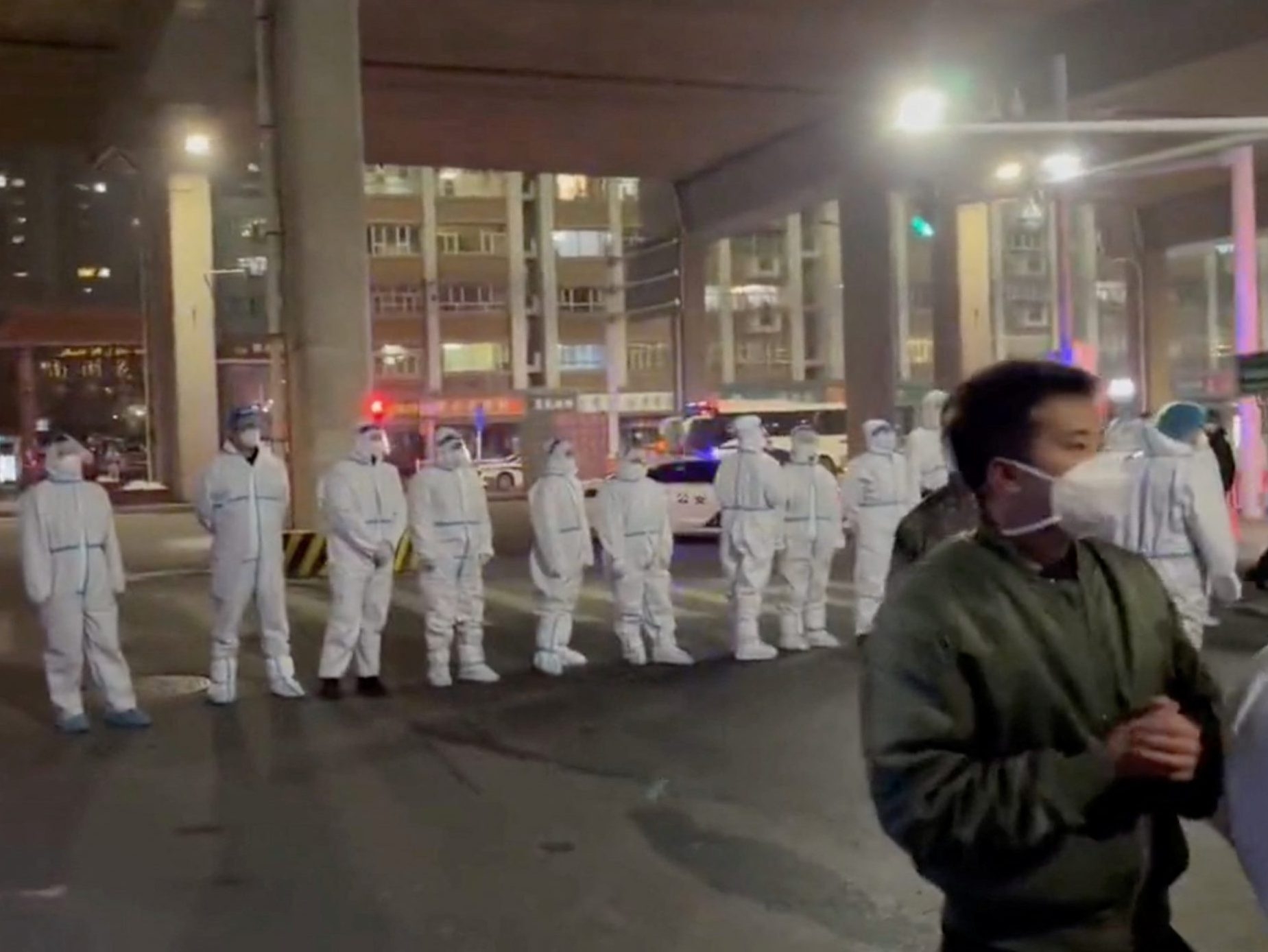 TAIPEI, Taiwan — Protests against China’s restrictive COVID measures appeared to roil in a number of cities Saturday night, in displays of public defiance fanned by anger over a deadly fire in the western Xinjiang region.

Many protests could not be immediately confirmed, but in Shanghai, police used pepper spray to stop around 300 protesters who had gathered at Middle Urumqi Road at midnight, bringing flowers, candles and signs reading “Urumqi, November 24, those who died rest in peace ” to memorialize the 10 deaths caused by a fire in an apartment building in Xinjiang’s capital city Urumqi.

A protester who gave only his family name, Zhao, said one of his friends was beaten by police and two friends were pepper sprayed. He said police stomped his feet as he tried to stop them from taking his friend away. He lost his shoes in the process, and left the protest barefoot.

Another protester, who gave only his family name of Xu, said there was a larger crowd of thousands of demonstrators, but that police stood in the road and let protesters pass on the sidewalk.

Posts about the protest were deleted immediately on China’s social media, as China’s Communist Party commonly does to suppress criticism.

Earlier Saturday, authorities in the Xinjiang region opened up some neighborhoods in Urumqi after residents held extraordinary late-night demonstrations against the city’s draconian “zero-COVID” lockdown that had lasted more than three months. Many alleged that obstacles caused by anti-virus measures made the fire worse. It took emergency workers three hours to extinguish the blaze, but officials denied the allegations, saying there were no barricades in the building and that residents were permitted to leave.

During Xinjiang’s lockdown, some residents elsewhere in the city have had their doors chained physically shut, including one who spoke to The Associated Press who declined to be named for fear of retribution. Many in Urumqi believe such brute-force tactics may have prevented residents from escaping in Thursday’s fire and that the official death toll was an undercount.

Anger boiled over after Urumqi city officials held a press conference about the fire in which they appeared to shift responsibility for the deaths onto the apartment tower’s residents.

“Some residents’ ability to rescue themselves was too weak,” said Li Wensheng, head of Urumqi’s fire department.

Police clamped down on dissenting voices, announcing the arrest of a 24-year-old woman for spreading “untrue information” about the death toll online.

Videos of protests featured people holding the Chinese flag and shouting “Open up, open up.” They spread rapidly on Chinese social media despite heavy censorship. In some scenes, people shouted and pushed against rows of men in the white whole-body hazmat suits that local government workers and pandemic-prevention volunteers wear, according to the videos.

By Saturday, most had been deleted by censors. The Associated Press could not independently verify all the videos, but two Urumqi residents who declined to be named out of fear of retribution said large-scale protests occurred Friday night. One of them said he had friends who participated.

The AP pinpointed the locations of two of the videos of the protests in different parts of Urumqi. In one video, police in face masks and hospital gowns faced off against shouting protesters. In another, one protester is speaking to a crowd about their demands. It is unclear how widespread the protests were.

The demonstrations, as well as public anger online, are the latest signs of building frustration with China’s intense approach to controlling COVID-19. It’s the only major country in the world that is still fighting the pandemic through mass testing and lockdowns.

Given China’s vast security apparatus, protests are risky anywhere in the country, but they are extraordinary in Xinjiang, which for years has been the target of a brutal security crackdown. A huge number of Uyghurs and other largely Muslim minorities have been swept into a vast network of camps and prisons, instilling fear that grips the region to this day.

Most of the protesters visible in the videos were Han Chinese. A Uyghur woman living in Urumqi said it was because Uyghur were too scared to take to the streets despite their rage.

“Han Chinese people know they will not be punished if they speak against the lockdown,” she said, declining to be named for fear of retaliation against her family. “Uyghurs are different. If we dare say such things, we will be taken to prison or to the camps.”

In one video, which the AP could not independently verify, Urumqi’s top official, Yang Fasen, told angry protesters he would open up low-risk areas of the city the following morning.

That promise was realized the next day, as Urumqi authorities announced that residents of low risk areas would be allowed to move freely within their neighbourhoods. Still, many other neighborhoods remain under lockdown.

Officials also triumphantly declared Saturday that they had basically achieved “societal zero-COVID,” meaning that there was no more community spread and that new infections were being detected only in people already under health monitoring, such as those in a centralized quarantine facility.

Social media users greeted the news with disbelief and sarcasm. “Only China can achieve this speed,” wrote one user on Weibo.

On Chinese social media, where trending topics are manipulated by censors, the “zero-COVID” announcement was number one trending hashtag on both Weibo, a Twitter-like platform, and Douyin, the Chinese edition of Tiktok. The apartment fire and protests became a lightning rod for public anger, as millions shared posts questioning China’s pandemic controls or mocking the country’s stiff propaganda and harsh censorship controls.

The explosion of criticism marks a sharp turn in public opinion. Early on in the pandemic, China’s approach to controlling COVID-19 was hailed by its own citizens as minimizing deaths at a time when other countries were suffering devastating waves of infections. China’s leader Xi Jinping had held up the approach as an example of the superiority of the Chinese system in comparison to the West and especially the US, which had politicianized the use of face masks and had difficulties enacting widespread lockdowns.

But support for “zero-COVID” has cratered in recent months, as tragedies sparked public anger. Last week, the Zhengzhou city government in the central province of Henan apologized for the death of a 4-month old baby. She died after a delay in receiving medical attention while suffering vomiting and diarrhea in quarantine at a hotel in Zhengzhou.

The government has doubled down its policy even as it loosens some measures, such as shortening quarantine times. The central government has repeatedly said it will stick to “zero COVID.”

Many in Xinjiang have been locked down since August. Most have not been allowed to leave their homes, and some have reported dire conditions, including spotty food deliveries that have caused residents to go hungry. On Friday, the city reported 220 new cases, the vast majority of which were asymptomatic.

The Uyghur woman in Urumqi said she had been trapped in her apartment since Aug. 8, and was not even allowed to open her window. On Friday, residents in her neighborhood defied the order, opening their windows and shouting in protest. She joined in.