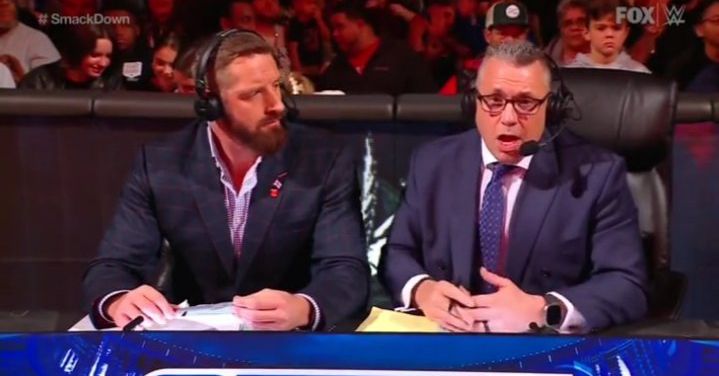 The rejuvenation of Michael Cole’s career in the post-Vince McMahon WWE has been pretty well documented. It’s led to his using terms we never thought we’d hear on company broadcasts, like “pro wrestling” and “Bullet Club,” and just generally looser, more natural feeling play-by-play on SmackDown and premium live events.

His time with Pat McAfee started it, and not having Vince in his ear made it official: Cole is clearly having more fun on the job than he has in quite some.

Sometimes that freedom takes a form other than excitement. We get a prime example whenever the subject of The Judgment Day comes up, and especially Dominik Mysterio and his “Mami” Rhea Ripley.

At Crown Jewel, the Voice of the WWE pleaded “Somebody needs to kick her ass!” when talking about Ripley. Then last night (Nov. 25) on SmackDownwhile introducing the footage of Dom’s Turkey Day attack on his father, Cole WENT OFF:

“… this punk spoiled brat, an entitled kid and his sick witch girlfriend Rhea Ripley did this to the father of Dominik, Rey Mysterio, yesterday — ON THANKSGIVING in Rey Mysterio’s own home. This is pathetic.”

As Ron Simmons would say, DAMN. Tell us how you really feel, MC.

Cole’s passion isn’t just changing opinions about his own work. In cases like this, it’s reminding WWE fans how integral commentary can be in helping to get a reaction to an act — in this case, heat on Dom & Rhea.

If I were him I’d watch his back, though. Mysterio & Ripley have proven they’ve no qualms about taking their enemies out, any time, any where.