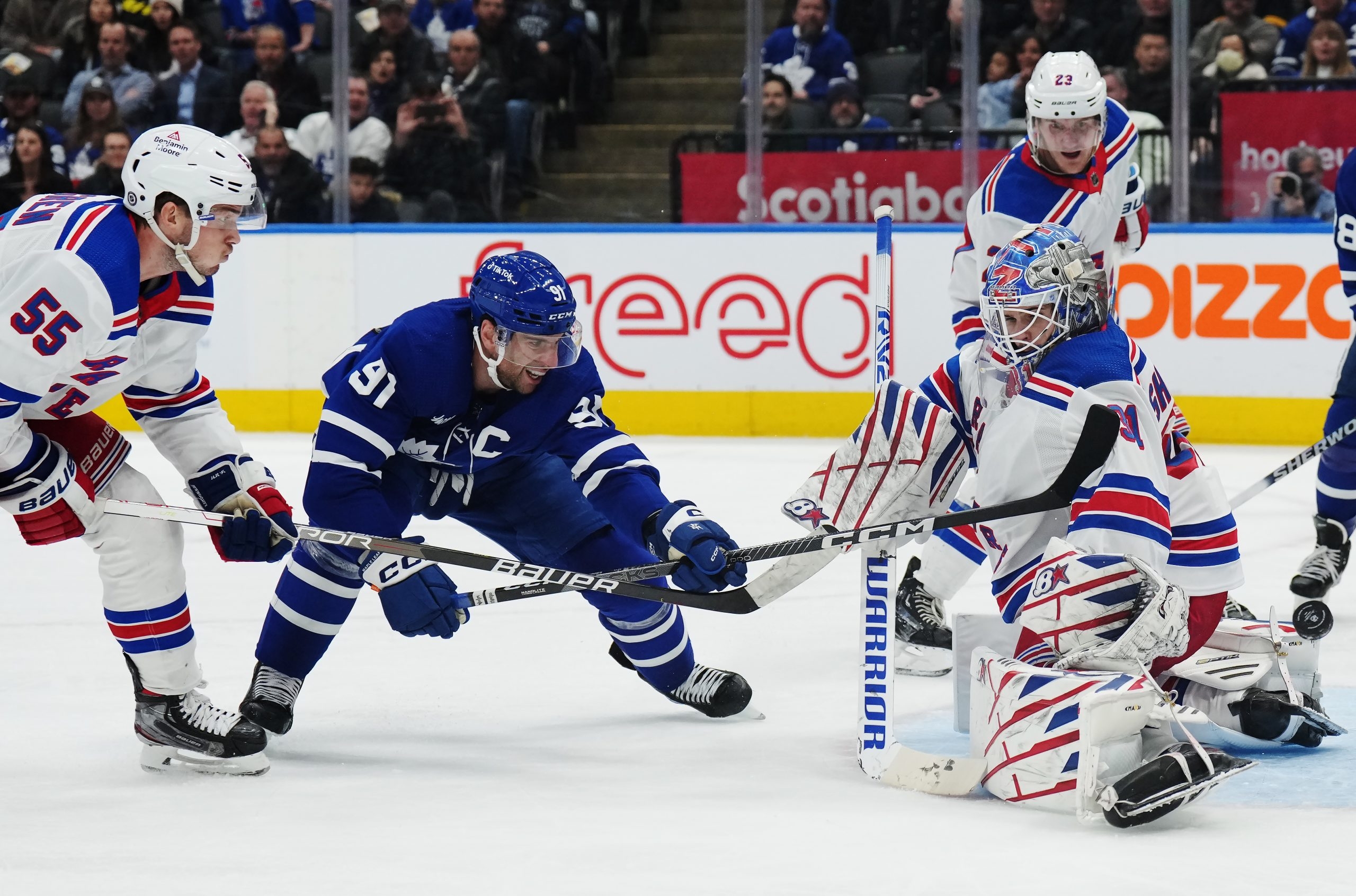 Sheldon Keefe had a bit of a curt answer on Wednesday morning when he was asked about the Maple Leafs’ previous game against the New York Rangers this season.

“Score more than one goal,” Keefe said during his morning availability, making a reference to how the Leafs could get a favorable result.

“We played a good hockey game when we were down there. We did a lot of good things in that game, just did not score enough.”

On Wednesday night at Scotiabank Arena, the Leafs were able to follow up on their coach’s fairly simple instruction.

Mitch Marner scored the winner at 19 seconds of overtime, sweeping past a couple of Rangers and covering his forehand to beat goalie Igor Shesterkin. Marner slipped the puck in as he fell to the ice.

With less than five minutes remaining in the third, Leafs defenseman Timothy Liljegren popped in and beat Shesterkin high on the glove side despite being checked by Chris Kreider.

William Nylander drew an assist on the goal, bringing him to 400 points in his NHL career.

In the final seconds of regulation, John Tavares hit the crossbar.

The Leafs, now 2-0 on a five-game home stand, will play host to the Ottawa Senators on Friday.

Keefe kept Marner with Auston Matthews, and Nylander with Tavares, after switching Marner and Nylander helped spark Toronto to a win against the New York Islanders on Monday.

The continuing reunion didn’t have a significant impact through regulation, though Tavares also assisted on Liljegren’s tying goal.

Filip Chytil scored two goals in the second period, giving the Rangers a 2-1 lead after 40 minutes.

On one of them, the first, Samsonov would have liked another opportunity. On the other hand, he had little chance of stopping it.

Chytil’s initial goal came on the kind of play that is conceivable but rarely is put into motion with a successful result.

Lining up against David Kampf at the faceoff circle to the right of Samsonov, Chytil shot the puck as it dropped to the ice, catching Samsonov off guard. Though the goalie appeared to be set, his stick was not on the ice and Chytil’s quick shot got under Samsonov’s right pad and into the net at 2:10.

Chytil’s second came at 6:31, and every Leaf on the looked bad in the process. The Leafs couldn’t clear, no one on the Matthews line was in position and the defense pair of Mark Giordano and Justin Holl flopped around as the Rangers controlled the puck.

In the end, Kaapo Kakko fed Chytil for a one-timer that Samsonov couldn’t get, even as he stretched across the crease.

At the other end, the Leafs couldn’t beat Shesterkin on 16 shots in the period.

The Leafs had a 1-0 lead at the end of the first period and it wasn’t just because Pontus Holmberg mimicked former Leafs captain Mats Sundin to a T.

Samsonov made nine saves, with his best coming on K’Andre Miller toward the end of the period. As Miller swept across the crease and appeared to have most of the net as a target, Samsonov moved to his right and got the shaft of his stick on the shot, sending the puck into the netting over the glass.

Holmberg’s fifth goal might have been his prettiest of his first NHL season, though we acknowledge that not all of his previous four come to mind. After taking a pass from Joey Anderson in the neutral zone, Holmberg scooted past the Rangers’ Julien Gauthier and Ben Harpur and ripped a backhand past Shesterkin on the goalie’s blocker side.

That brought to mind the backhand that Sundin often would use to fool netminders across the NHL. No Leafs player has consistently had a similar backhand since.

The blemish on Chytil’s first goal was the only one for Samsonov on the night.

“Sammy, when he is feeling it, he is reading the play so well, you can just see it,” Giordano said after the Leafs’ morning skate. “It’s not just straight shots, it’s deflections, tips, seeing plays. He’s there before the puck gets there.

“It’s like with any player, goalies are the same — you can see that confidence and in a position that’s that important, when they have that confidence, the whole team feeds off it.”