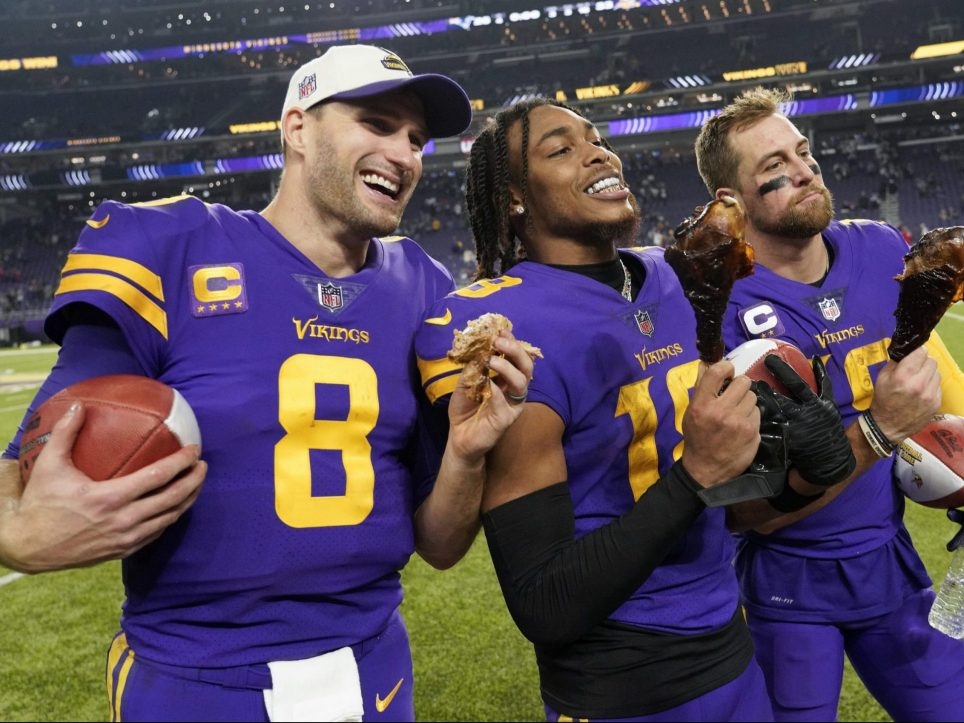 MINNEAPOLIS — Kirk Cousins ​​threw for 299 yards and three touchdowns, the last a go-ahead score to Adam Thielen in the fourth quarter to push the Minnesota Vikings past the New England Patriots 33-26 on Thursday night.

Justin Jefferson had 139 yards and one of the touchdown passes from Cousins, who delivered precisely the clutch performance against a formidable defense the Vikings (9-2) needed to bounce back from a blowout loss to Dallas. That cool rookie coach Kevin O’Connell a win over Bill Belichick, who drafted him with the Patriots in 2008.

Mac Jones passed for a career-high 382 yards and two scores to snap a lagging offense to life for the Patriots (6-5), but they ran out of steam down the stretch. Their fourth quarter included two three-and-out punts, a turnover on downs at the Minnesota 39 and a desperation last drive that went nowhere.

Jones found Hunter Henry for a wide-open 37-yard touchdown pass to start the second half for a 23-16 lead. Kene Nwangwu scored on a 97-yard kickoff return to strike right back for the Vikings.

Jones – who went 23 for 27 last week for a career-high completion rate – appeared to hit his tight end for a second score with a twisting catch at the goal line that was ruled a touchdown on the field. The replay reversal – Henry’s bottom hand appeared to be under the ball as it bobbled briefly – forced the Patriots to settle for Nick Folk’s fourth field goal of the game late in the third quarter.

Another vital call went the Vikings way a few minutes later when Pierre Strong Jr. was called for running into punter Ryan Wright. With a fresh set of downs, Cousins ​​and the Vikings cruised up the field for the go-ahead touchdown.

The Patriots allowed just three points in each of their last two games and brought the NFL sack leader Matt Judon to the stadium where the Vikings were decimated by Dallas just four days earlier while Cousins ​​took a career-high seven sacks.

With standout left tackle Christian Darrisaw sidelined by a concussion, the Vikings gave backup Blake Brandel plenty of extra help and put Cousins ​​in far more favorable situations with shorter drops and quicker throws. The Vikings had 231 yards in the first half, more than the Patriots allowed in the previous two games combined.

Jefferson had his footprints all over this game from the start, when his 3-yard reception on a crossing route in the end zone capped the opening drive. He made catch after improbable catch in tight coverage, including a 36-yard grab on a go route right before he was sandwiched by Jones and Devin McCourty to set up Thielen’s touchdown.

Jefferson set the NFL record for most receiving yards in a player’s first three seasons to pass Randy Moss. Jefferson has hit the 100-yard mark in 21 of 44 career games.

The first half was filled with examples of those extra edges the Patriots have long created for themselves under Belichick as one of the league’s most well-rounded teams.

Marcus Jones, who had the 84-yard punt return touchdown with 5 seconds left to beat the Jets the previous week, took a second-quarter kickoff 46 yards to set up a tiebreaking field goal. Then after the Vikings took the lead back and Greg Joseph’s fifth missed extra point this season, the Patriots saved all three timeouts with 1:30 left to move 70 yards in nine plays for another kick by Folk.

Patriots: RB Damien Harris (thigh) was hurt in the third quarter and didn’t return. … WR Jakobi Meyers (shoulder) was hurt when he made a diving 26-yard reception on their first snap. He returned late in the second quarter. … C David Andrews (thigh) and RT Isaiah Wynn (foot) were inactive, replaced in the starting lineup by James Ferentz and Yodny Cajuste.