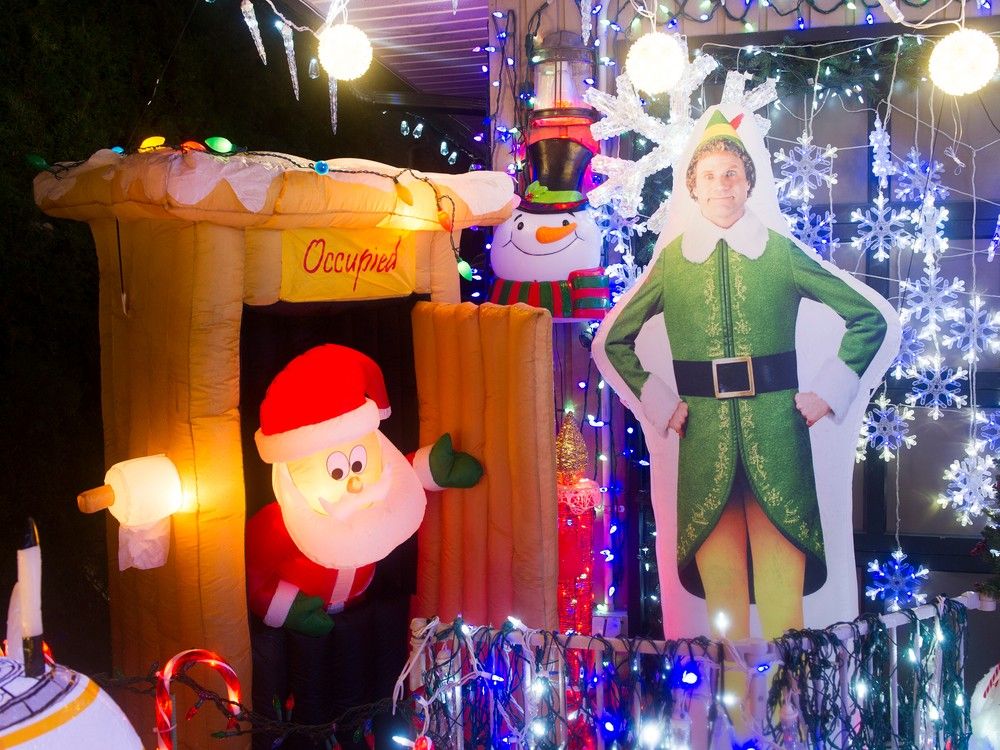 We had just moved into our new house.

Just as neighbors were putting Santa and his reindeer up on their roofs, or a cheery, lit-from-within plastic snowman on their front lawn, we, too, were putting up our own Yuletide display.

There would be a string of lights on the maple tree, a wreath on the front door and poinsettias glowing from within. Yes, there was a tree in the living room and the appropriate flotsam and jetsam on the mantle. It was all very fa-la-la-la. All of it predictably, and unremarkably, festive.

All except for one thing. The sign. The huge, professionally painted, plywood sign that ran the length of the second storey sundeck. It had to be 18 feet long, maybe longer. Had to be four feet high if it was an inch. It, too, was wreathed in jolly multicolored lights. We lived near the school. We weren’t tucked away on a cul-de-sac where only residents passed by. Let me repeat: we lived near the school.

My mom had painted the sign, delivered and installed. The first year she put it up we made all the nations’ newspapers. In subsequent years, several columnists would make annual mention of it. I now know too well that it was a welcome grist for their holiday musings.

If you’re a longtime local and if you’re of a certain vintage, you, too, may remember this festive banner. Each Christmas our home was emblazoned with one of the most famous quotes from all of English literature. Each Christmas, the sundeck made a marquee celebrating one of the best loved holiday classics. There, in meter high, uppercase red and green letters, was my mom’s seasonal message to the world: BAH! HUMBUG!

Again, let me repeat: we were new to the neighborhood and we lived near the school. And at school, I got sidelong glances. Furrowed brows. The humour-impaired implored me for explanation. Was my mom a heathen? Yes, she was, and is, a heathen.

People either loved the sign or hated it. Irreverence and sarcasm may have been the linchpin of my household, but I don’t think it had become the bedrock of mainstream comedy quite yet.

Now, mom is no way a Grinch. She bears only a passing resemblance to Ebenezer Scrooge. But she was positively gleeful for the duration of the sign’s appearance. It’s not that she eschewed Christmas. She had four kids; she made gingerbread houses, shortbread, and homemade Christmas stockings were, indeed, hung by the chimney with care. Her oven turned out the best Christmas fruitcake I’ve ever eaten — a blond cake weighted with fruit and rum — and she filled the house with sprays of evergreens and berries.

It made her cackle with delight.

For the last two years, I’ve put a special pandemic wreath on the front door. It’s your regulation ring of cedar boughs lit by a hidden battery pack of multicolour lights. For ornament, I wired on a half dozen mini-bottles of hand sanitizer and, across the center of the wreath, emblazoned in holiday glitter on a N95 mask are the words: Merry COVID!

Not quite on the same scale as mom’s boffo banner, but somewhat in the same vein.

I guess the acorn really doesn’t fall far from the tree.

Jane Macdougall is a freelance writer and former National Post columnist who lives in Vancouver. She will be writing on The Bookless Club every Saturday online and in The Vancouver Sun. For more of what Jane’s up to, check out her website, janemacdougall.com

This week’s question for readers:

What’s your seasonal display? Do you keep it traditional or personalize your display?

Send your answers by email text, not an attachment, in 100 words or less, along with your full name to Jane at thebooklessclub@gmail.com. We will print some next week in this space.

Ever played dice with Mother Nature? How did it turn out?

• Hoo boy, did we ever. When that late-July afternoon western sky went black, my mates and I would calibrate just how long we’d have for fishing, hanging out on the railroad trestle, hiking the forests, playing a last inning of baseball before the ‘silver leaf’ downdraft wind would arrive five minutes before the onset of the almost-every humid afternoon thunderstorm.

Once, we all dived for safety into the London (Ontario) Public Library 30 seconds before a lightning-strike obliterated a tree no more than 20 feet away. I learned that, if you’re close enough to a lightning strike, you’ll hear — and be blinded by — a little ‘click’ before the enormous sky-filling ‘Ka-BANG’ which follows.

I grew up in Windsor in the 1950s, and I remember those muggy summer nights when storms produced lightning that knocked bricks off chimneys and thunder that shook the house. Tornado warnings cut into TV shows.

I visited my parents’ farm north of Toronto in the 1980s on a calm summer day, and stood in the open garage doorway. Right outside was a neighbor’s pickup truck, and a lightning bolt came down and attached itself to the roof with a “bzzzzt,” followed by an enormous thunderclap. Later the owner came by and said: “My truck won’t start.”

• You say lightning, I say Cypress Hills, Saskatchewan. One afternoon my wife and I were parked close to the fence in the upper parking lot, watching a nasty, lightning-filled storm approaching. Thor was pelting the Prairies with electrical darts.

After watching for 15 minutes, it occurred to us that the storm was headed our way. We decided to exit, stage left. I headed for the other side of the lot, and the road down the mountain. Just as we got to the gate, a lightning bolt hit the ground, exactly where we had been parked.

• The ad showed gleeful tourists careening through the jungle treetops on a series of ziplines. Just what was needed to enliven our Costa Rican cruise.

What the ad didn’t show was a weather forecast that warned of torrential rain and lightning activity. Also not mentioned was the fact that roads could wash out and one’s whole bus tour could be trapped miles away from the ship at sailing time. This describes what unfolded when Mother Nature cut loose on our recent trip.

Fortunately, we had opted for tamer excursions but listened in awe as our tablemates later recounted their experience. With rain lashing and lightning crackling around them, they realized that wire cable and metal harness clips are not your friends in a lightning storm. Could the zip line become a zap line? The operators realized the danger and the riders were brought to the ground where a two mile trek through a muddy jungle awaited them as the roads were gone.

• In my youth it was customary to watch TV with our parents, sitting in the living room.

One hot, humid Quebec evening, thunder started getting louder and closer. All of a sudden, lightning felt like it had hit our house and we all stared at what seemed like a ball of fire rolling down the carpet, coming from one electrical outlet and traveling to another across the room, then ‘pouf’ it was gone . We all felt like we had static coursing through our bodies. You never saw three kids more scared in their lives than that memorable evening.

• Some years ago local friends took us for a visit to a spot just north of Hanuama Bay on Oahu named the “Toilet Bowl.” It is a naturally formed hole in the rocks fed by the surging action of the tide which pumps the water level up and down vigorously.

I jumped in and enjoyed going up and down with the wave action but, unlike my nimble host, I tried for a long time to get out but couldn’t do so. The technique to get out is to propel oneself up and out when the water rises to its peak. Just when I was becoming tired and worried, a large surge literally projected me out onto the rocks.

I was relieved and lucky. Apparently the sea didn’t want me that day. The “Toilet Bowl” is now closed to the public and listed as one of the 10 most dangerous places in Hawaii.

• Decades ago, when my two daughters had piano lessons, I’d sit outside in the van with one or the other during the lessons. One particular stormy night, just after my youngest daughter had climbed back into the van, a bolt of lightning struck our van.

The light and sound enveloped us and we almost completely lost our hearing for a couple of days. The smell of burning rubber was awful and when the second lesson was over, I drove ahead and noted the black marks on the road where my tires had been. If the bolt had hit seconds earlier, the outcome would have been dire. We were truly blessed.

• I also have also had a love affair with lightning storms since I was young. We had an A-frame cottage in Ontario. When the lightning started on a hot summer night, I’d stand on the top bunk, and watch the show.

The lightning lit up the bay and the cottage shook within seconds of every bolt. The dogs ran for cover, but I loved it. Now living on the west coast, I still get excited when I hear that distant rumble of thunder. A storm’s a brewing.