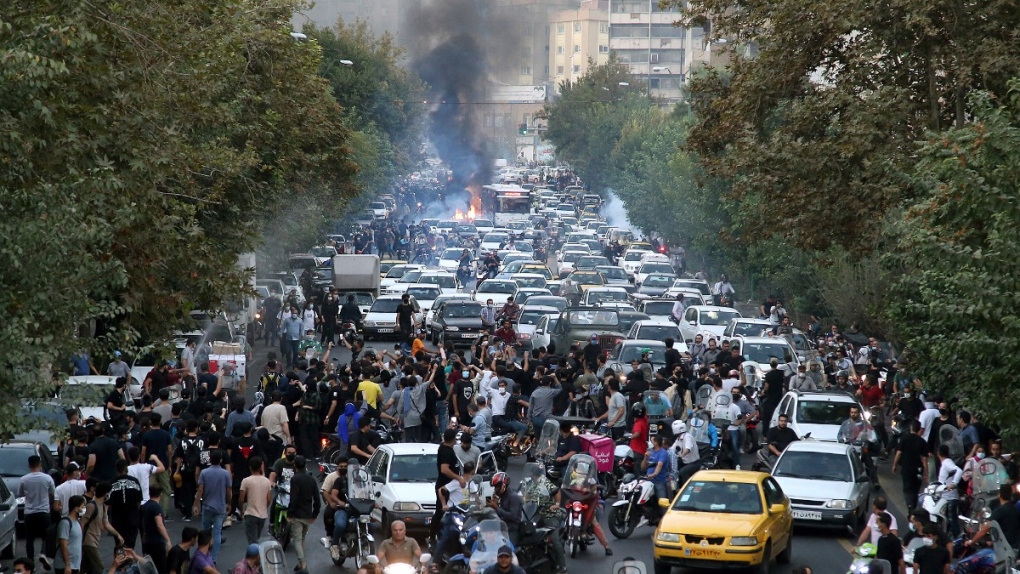 Canada’s foreign affairs minister is laying blame on the Iranian regime for the recent death of a woman, who was detained for allegedly violating the country’s forced auction laws.

Amini later died in custody and while police say the 22-year-old suffered a heart attack and was not mistreated, her family has doubted this account.

Iranians across the country have since protested on the streets and confronted police, with videos on social media showing women removing and burning their veils. Some women have also cut their hair in protest.

“Her death was a direct result of the systemic and continued harassment and repression of women by Iran,” Joly said in her statement. “We stand in solidarity with Mahsa Amini’s loved ones and the Iranian women.”

Joly also condemned the “violent crackdowns” on civilians and said, “Canada is gravely concerned by potential further crackdowns and the use of additional force against civilians.”

State TV in Iran said Thursday that 26 protesters and policemen have been killed since the protests began last Saturday following Amini’s funeral, although it is unclear how authorities arrived at those numbers.

The Associated Press reports that at least 11 people have been killed, based on statements from state-run and semi-official media.

Iran has disrupted its internet and platforms such as Instagram and WhatsApp in response to the protests. Anti-government protests were also with Friday by pro-government rallies.

“We call on Iran to stop escalating tensions and to refrain from committing further acts of violence against its own population. We urge Iran to meaningfully address the grievances of all of its citizens without discrimination and to protect their right to peaceful protest,” Joly said .

“Women’s rights are human rights. We salute the courage of the Iranian women who are peacefully protesting and we join them in sending the regime a very clear message: they must end all forms of persecution and violence against women.”

The House of Commons on Wednesday adopted a motion by unanimous consent to offer its condolences following Amini’s death.

The federal government officially advises Canadians to avoid all travel to Iran and most recently has cautioned against attending areas where demonstrations are taking place.


In a statement on Twitter Wednesday, newly minted Conservative Leader Pierre Poilievre called Amini’s killing “another heartbreaking act of brutality and murder by the Iranian dictatorship against the women of Iran.”

“Trudeau needs to finally stand with Iranian people who are fighting for their freedom and list the IRGC (Islamic Revolutionary Guard Corps) as a terrorist group,” he added.

The IRGC is a branch of the Iranian armed forces, formed in 1979 after the Iranian Revolution.

The United States listed the IRGC as a designated foreign terrorist organization in 2019.

Canada, meanwhile, has designated the IRGC’s clandestine Qods Force as a terrorist entity, but has not done so for the corps itself.

Recent calls for Canada to label the IRGC a terrorist group have come following the downing of Ukraine International Airlines Flight 752 by Iranian forces on Jan. 8, 2020, which killed all 176 people on board, including 55 Canadian citizens and 30 permanent residents. More than 100 passengers had ties to Canada.

In June 2018, the House also adopted a Conservative motion to list the IRGC as a terrorist entity, among other actions.

“Her name is #MahsaAmini. She was 22 years old. She was murdered. She was beaten and murdered by the Iranian regime. The House of Commons voted to declare IRGC a terrorist organization in 2018. The government has not acted to do so. It must happen now,” Conservative MP Melissa Lantsman tweeted on Wednesday.

In a statement on Thursday, NDP Foreign Affairs Critic Heather McPherson praised the women and men in Iran who are “taking courageous steps to fight for their rights and freedoms,” adding that the party supports the UN’s call for an independent investigation into Amini’s death.

“Mahsa’s tragic death is a reminder that gender-based violence is still a reality for many women and girls around the world and Canadians are rightfully concerned about the on-going situation in Iran,” McPherson said.

“It is disturbing to hear of the reports of the near-total internet blackouts as the Iranian government attempts to suppress protests.”

A crackdown on protesters in 2019, sparked by rising gas prices, led to hundreds of estimated deaths, with one report from Reuters raising the death toll to as high as 1,500.


With files from The Associated Press, CNN and Reuters

The Killing of #MahsaAmini is another heartbreaking act of brutality and murder by the Iranian dictatorship against the women of Iran.

Trudeau needs to finally stand with Iranian people who are fighting for their freedom and list the IRGC as a terrorist group.

Her name is #MahsaAmini.
She was 22 years old.

She was murdered.
She was beaten and murdered by the Iranian regime.

The House of Commons voted to declare IRGC a terrorist organization in 2018. The government has not acted to do so. It must happen now. #cdnpoli pic.twitter.com/feKDncG1Fo

My statement on the heroic efforts by the women & men in #Iran, fighting for their rights and freedom. the @NDP commend the Iranians who are fighting for themselves’ & for generations of women to come and commit to supporting their efforts!#IranProtestshttps://t.co/5eLow7k1dE