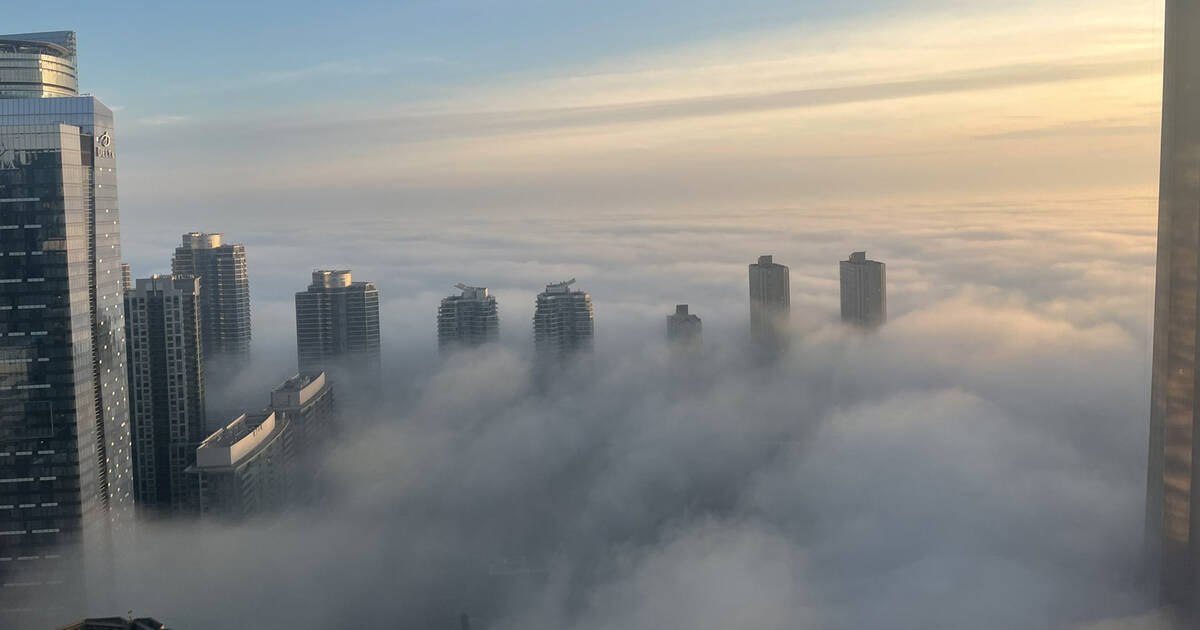 Toronto residents are being advised to stay safe and drive slow this evening in the face of persistent fog that’s literally so thick I can’t see any condo buildings more than 200 meters away fromy my desk right now, let alone the ever-present beacon that is the CN Tower.

Some might say it’s a nice visual break… but one that comes with a set of problems more accute than sky clutter or shadow creep.

“Dense fog is confined to locations near Lake Ontario from downtown Toronto to Humber Bay. This includes portions of the Gardiner Expressway between Park Lawn and Bathurst,” reads the latest update to Environment Canada’s fog advisory for the City of Toronto, first issued Thursday morning .

“Travel is expected to be hazardous due to reduced visibility. If visibility is reduced while driving, slow down, watch for tail lights ahead and be prepared to stop.”

Some parts of Toronto are currently experiencing “near zero” visibility, according to meteorologists.

Residents of the city have been taking to social media with their unreal snaps of what looks like a scene from one of Stephen King’s books (The MistI’m thinking?)

What started as a pretty foggy morning has, over the course of the workday, turned into a dangerously hazy late afternoon as the sun began to set (way too early, imho, because winter is cruel.)

Photos of the city being eaten up by clouds are, for the most part, absolutely spectacular. It’s a cool thing to see.

And it definitely brings the moody vibes that tend to inspire some of our city’s finest photographers.

Some shots almost make Toronto’s downtown core look quaint and calm thanks to fog covering up every tourist attraction and building within range.

… but the fog is not such a cool thing for people who need to travel into or out of Toronto right now.

Passengers at airports in the region might be particularly frustrated by the foggy skies, as these weather conditions can make flying dangerous.

We want our pilots to be able to see below the clouds as well as above, right?

“To maintain safe operations, the flow of arrivals has been reduced by NAV Canada as a result of fog affecting the region,” announced Toronto’s Pearson International Airport Thursday morning. “The airport continues to operate, but inbound flights may be delayed.”

Both arrivals and departures continue to be delayed by inclement weather at Pearson, which advises that passengers “check their flight time and status with their airline before leaving for the airport.”

Porter, the airline that flies out of Billy Bishop airport on the Toronto Islands, issued a similar advisory on Thursday, writing in an alert: “We are currently experiencing reduced visibility in Toronto and surrounding areas which may impact your flight. Please visit our website to monitor your flight status.”