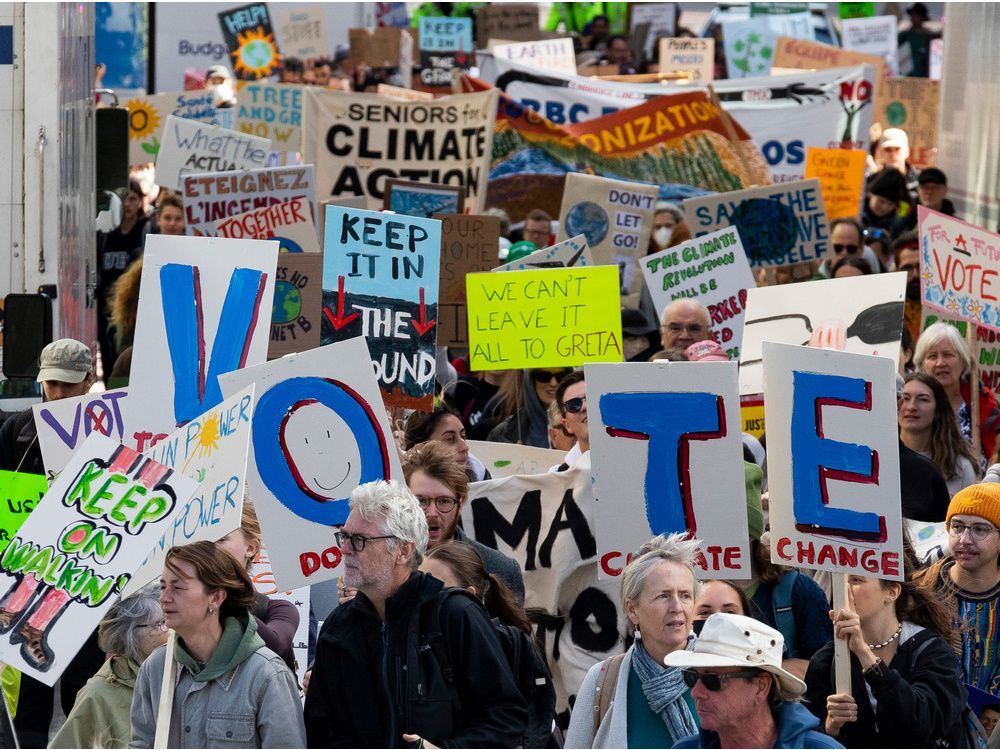 That was fine by his mom Laurie-Anne Muldoon, who was standing alongside her son as they joined about 500 others in Confederation Park for a “climate strike” rally that later included a march on to Parliament Hill.

Louka held a sign he drew in crayon that his mom says captures his fears about the deteriorating state of the planet.

She said they chose it together after looking at various protest slogans online.

“This is how he feels about climate change. He feels it will shorten his life. That’s his fear.”

Laurie-Anne said she was attending the rally for her son and other children who “really bear a heavy burden.”

“As a parent, it really worries me that he’s worried. It’s so unfair.”

The inter-provincial rally, sponsored by 2022 Fridays for Future Ottawa and Climat GO, started with gatherings at Confederation Park across from Ottawa City Hall and at the Maison du Citoyen in Gatineau.

Participants from both places marched to Parliament Hill, where they converged at a rally with speakers and music.

Protesters called for governments to make changes to avert climate catastrophe, such as dramatically cutting carbon emissions that are contributing to global warming.

The Fridays for Future movement was begun by Greta Thunberg, the teenager who in 2018 sat in front of the Swedish parliament to protest her government’s lack of action on climate change.

The plain-talking Thunberg inspired an international student movement with her angry, anguished call for adults to do something about the climate carnage they were leaving behind for future generations.

The pandemic threw a wrench into climate protests, but the international Fridays for Future organization says rallies were planned for Friday’s “global climate strike” in cities on every continent.

One of their key demands is to keep the rise in global temperatures to below 1.5 c compared to pre-industrial levels.

Ottawa protesters hero signs reading “Protect Trees! Our lives Depend on it!,” “There is no Planet B,” and “You can’t recycle wasted time.” Among the chants: “Hey hey, ho ho, fossil fuels have got to go.”

Vishesh Abeyratne held a sign saying: “1/3 of Pakistan is under water. Who’s next?”

Floods have devastated Pakistan, killing and displacing millions of people and destroying crops, he said.

“People are on the brink of starvation,” he said.

The climate emergency is being felt worldwide, but there seems to be a complete lack of political will to act, he said.

“There’s a wilful, collective denial going on. What does one do in the face of all this? All we can do is to continue to bug them (politicians.)”

Protesters at Confederation Park joined a chant of “Think Globally, Act Locally” after a speaker urged them to fight destruction of trees in the Hunt Club forest, for instance.

Another speaker decried the proposal to chop down trees in the Central Experimental Farm for the construction of the new Ottawa Hospital.

Speakers at the Confederation Park rally also pulled in a variety of other themes, from corporate greed and the rights of migrant workers to xenophobic nationalism.

The 500 or so protesters who arrived on Parliament Hill from Gatineau included many students.

Noemie Burrs, 18, said students at Cegep de l’Outaouais successfully petitioned the administration to cancel classes so students could attend the rally, she said.

“It’s important to promote this cause. It’s our future after all.”

Governments need to change their priorities and also ease the transition to a greener economy through measures like subsidizing electric vehicles and providing more charging stations, he said.