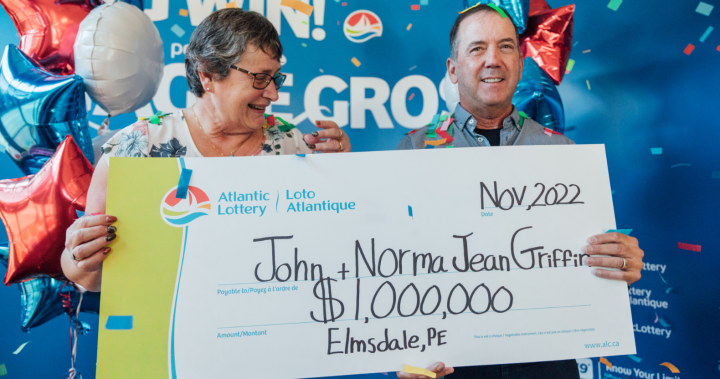 A Prince Edward Island couldn’t believe their eyes when they got an email from Atlantic Lottery saying they won Gold Ball draw prize.

According to a release, John Griffin had purchased a ticket over the ALC app, and was at the airport when he got the win announcement.

“It usually says you won $4 or something, but it didn’t say so I thought maybe I won $100 or something,” Griffin told Atlantic Lottery.

Norma Jean was substitute teaching at the time, so Griffin texted her to call as soon as possible. When she finally did, she was in disbelief.

“I called and couldn’t understand what he was saying because he was worked up,” she said.

“So, he gave the phone to our niece who was traveling with him and when she told me, I told her, ‘Stop telling me lies and joking around with me.’”

In addition to the $1 million draw prize, the Griffins also won $10 on the TAG draw. The Gold Ball draw guarantees a winning ticket every Wednesday and Saturday, where a winner can take home $1 million, or the growing Gold Ball draw that starts at $10 million, according to Atlantic Lottery.

Using the app to play was something new for John Griffin.

“I used to buy about three a year and keep them in my wallet for two or three months before checking them,” he said.

The switch to online turned out to be a lucky one.

The family is not planning a trip to Turks and Caicos, with more travels to follow. The Griffins said the win will help them retire sooner than they planned, and will allow for some renovations on their cottage.