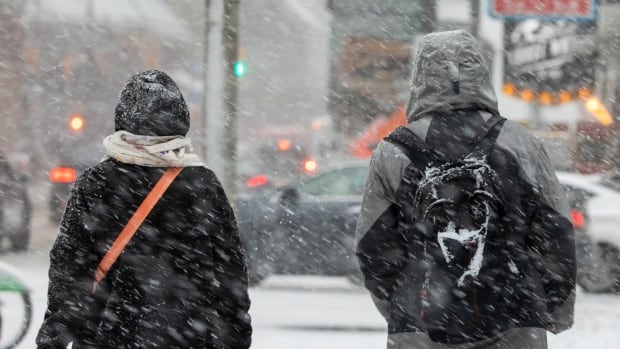 Pearson International Airport says more than 25 per cent of its departures and arrivals on Wednesday have been canceled as a winter storm brings heavy snow to southern Ontario.

“Delays and cancellations are expected so please check your flight status with your airline,” the airport reported on its website.

The number means 414 departing flights and 409 arriving flights did not go ahead as scheduled.

In Toronto, meanwhile, heavy snow is making roads slippery and police are reporting scores of minor crashes. Police are urging motorists to slow down and drive to the weather conditions, use extra caution and leave extra time to get their destinations.

“There are plows and salters out on the roadways, but we are receiving a significant amount of reports of minor collisions, people sliding through intersections or sliding down or being stuck on hills within the city,” Toronto Police Const. Laura Brabant said.

Brabant said police are asking everyone to stay home if they can unless it is an emergency. If residents do have to go out, they are urged to make sure their windshield washer fluid is topped up, their vehicles have snow tires and are fit for the road.

Ontario Premier Doug Ford also urged people to stay at home on Wednesday, saying on Twitter: “Southern Ontario will be getting a severe snow storm that will create treacherous driving conditions in many areas. Please avoid driving unless absolutely necessary.”

A snowfall warning remains in effect for most of the GTA, with Environment Canada forecasting between 15 to 20 centimeters for the region.

Toronto, Halton, Peel, York, Durham, Barrie and surrounding areas are all under snowfall warnings, with the weather agency telling people to expect “a significant impact on rush hour traffic in urban areas.”

Total snowfall accumulations of 15 to 20 centimeters are expected, alongside reduced visibility in heavy snow, with rapidly accumulating snow that will make travel difficult.

Rob Kuhn, a severe weather meteorologist with Environment Canada, said he expected roughly 10 centimeters of snow to fall between noon and 6 pm on Wednesday, and another 10 centimeters through the evening and overnight into Thursday.

The snow is expected to taper off by Thursday morning.

Meanwhile, GO Transit says it is operating on “a reduced and adjusted schedule to ensure reliability and safety for passengers.”

The TTC said in a news release issued on Wednesday afternoon that the storm is “likely to make surface travel challenging.”

The transit agency said the Line 3 Scarborough SRT is currently running, but “as the weather turns to a snow event, the line will be closed and fully replaced with buses until weather allows for it to re-open.”

The TTC also said that 41 bus stops located in hilly areas that are “difficult for buses to navigate in snow” had been taken out of service as of 1:15 pm on Wednesday.

At YRDSB, in-person exams will not occur on Jan 26, but virtual school exams continue as scheduled.

Sheridan College said it closed its campuses at 4 pm for the evening. All scheduled in-person classes are cancelled, while virtual classes will continue on schedule.

The City of Toronto said community recreation centers and indoor arenas were to close by 6 pm All instructional, drop-in programming and permits were canceled as of 4:30 pm, the city said in a news release.

After-school programs and facilities with child care will remain open until all participants are picked up. Artificial outdoor ice sink leisure programs will continue but instructional programming and skate lending are cancelled.

All Toronto Public Library branches and buildings closed at 4:30 pm on Wednesday, while the Toronto Zoo closed at 2 pm

On Wednesday afternoon, the city said that salting operations had begun across the city, while sidewalk, separated bike lane and bus stop clearing had started in Scarborough.

“The City is monitoring the weather forecast and road conditions and is deploying crews and equipment as required,” the city said in the release.

Crews and contractors with the City of Toronto were out Tuesday night applying liquid brine on highways, bridges, hills and priority intersections, said Vincent Sferrazza, maintenance and operations director with transportation services.

Sferrazza said he expects the storm could necessitate six to eight rounds of plowing on major arterial roads and up to three rounds on local streets.

“This is going to take a few days, going into the weekend,” he says. “It’s all hands on deck, we are ready to go.”

Sferrazza added that some snow removal will likely be required as well, particularly for protected bike lanes, streetcar routes, bus stops and pedestrian walkways. That work would begin over the weekend and continue into next week.

“I ask our residents to please be patient. Let our operators get to their beats, let them finish. And then, certainly, they can notify us through 311 to identify any areas that perhaps we may have missed or may need further work,” Sferrazza said.

Warming centers to open in evening

The city also said it is opening three warming centers for people who are experiencing homelessness as of 7 pm at the Scarborough Civic Center at 150 Borough Dr., Metro Hall at 55 John St. and Mitchell Field Community Center at 89 Church Ave.

The warming centers offer an indoor and warm place to rest and access snacks, washroom facilities and referrals to emergency shelter.

City officials say they are expecting another five to ten centimeters of snow on Sunday.