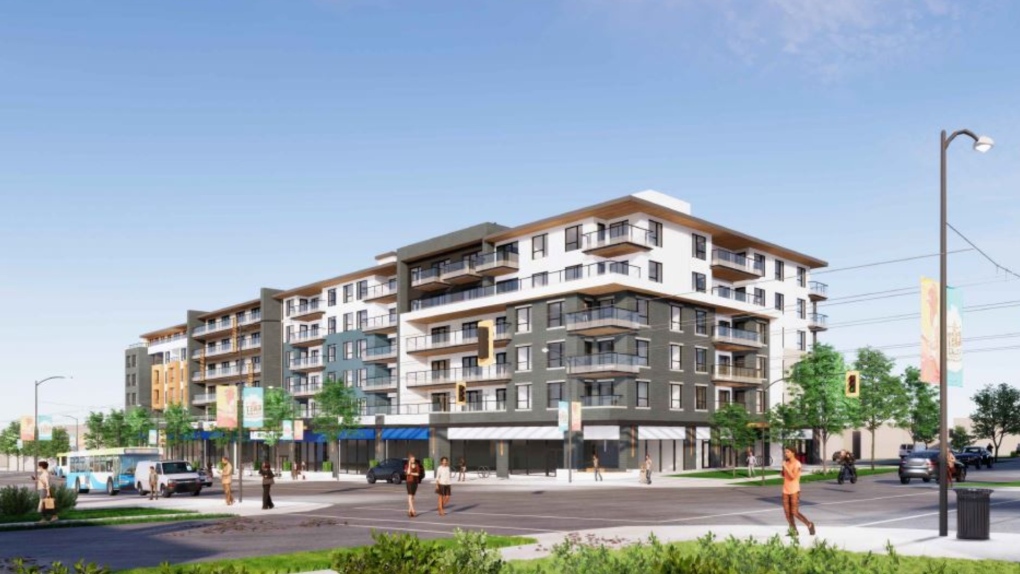 A piece of land on a major road in East Vancouver that has sat empty for more than a decade appears to be moving closer to redevelopment.

The City of Vancouver is currently accepting public comments on a development permit application from JTA Development Consultants that would see construction of a six-storey, mixed-use building at the intersection of East Hastings and Penticton streets.

The proposed building would replace the existing London Drugs building and the vacant lots on either side of it. Photos from Google Street View show that the lot to the west of London Drugs, which was once home to several low-rise retail buildings, has been empty since at least 2012.

Plans call for ground-level retail, restaurant and pharmacy space, with a total of 157 units of rental housing on floors two through six. Two levels of underground parking with 159 total spaces are also included in the proposal.

All of the units would be available for rent at market rates, according to the proposal, which the city says is “conditional” under the site’s current commercial zoning. That means the city’s director of planning will need to decide whether to approve the project or not.

A rendering of the rear of the proposed building is shown. (shapeyourcity.ca)

The planning documents posted on the Shape Your City website do not indicate the specific breakdown of unit types within the development. However, the design rationale document from RH Architects says there will be a mix of studio, one-, two- and three-bedroom units, with the goal of 37 per cent of units being “family-oriented,” meaning they have at least two bedrooms.

The proposed building would have more than 140,000 square feet of floor space and take up more than half of the block of East Hastings Street between Kamloops and Penticton streets.

An aerial view of the project location from the application documents is shown. (shapeyourcity.ca)

In the design rationale, the architects say they have attempted to prevent the building from becoming monotonous over its more than 300 feet of frontage on Hastings.

“The residential levels massing is broken up into a series of forms with different but complimentary expression and colours, creating the appearance of multiple coherent buildings,” the document reads.

“The balconies have individual treatment on each building section and provide rhythm to the composition.”