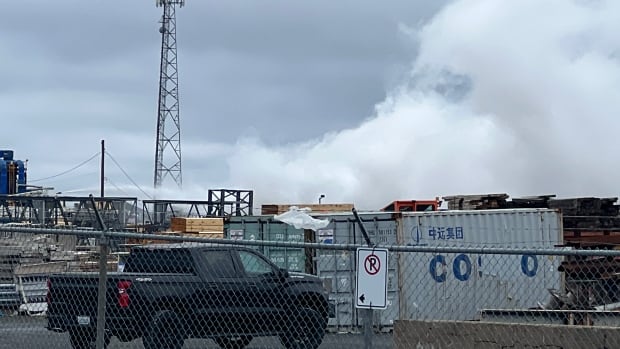 Fire crews put out a fire at a scrap metal yard in Goodwood, NS, Saturday afternoon, but crews will remain at the scene for a few more hours in case of any hotspots, an official said.

Some fire personnel and equipment remain at the scene, an official said

A fire at the scene of a scrap metal yard in Goodwood, NS was extinguished shortly before 4 pm Saturday, an official said.

Some personnel remained on the scene Saturday night in case of any hotspots, according to Joe Fulton, acting district chief with Halifax Regional Fire and Emergency.

Crews were called to the facility at 6:15 am AT Saturday.

Fulton said around a dozen fire trucks were at the scene. Firefighters took a defensive approach, meaning they surrounded the fire with water to keep it from spreading.

The section of Prospect Road where it intersects with Mills Drive had to be closed for several hours because of the fire, the RCMP said in a tweet. It reopened around 12:15 pm

Fulton said some local businesses closed because of the fire.

He said he wasn’t aware of any residents being evacuated from the area, and noted there are few homes in the immediate area of ​​the fire.

Corrections and clarifications|Submit a news tip|