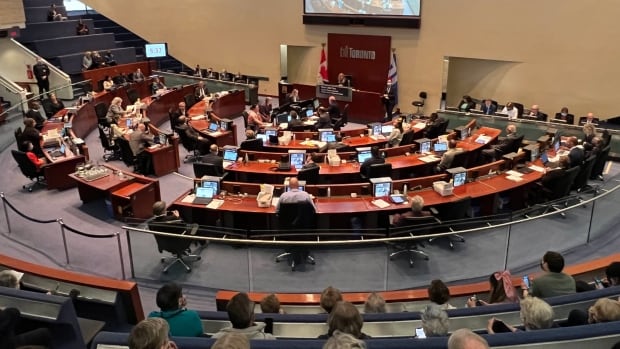 Toronto city council voted Thursday to ask the Ontario government to pause its new sweeping housing construction bill until the end of January so the province can consult the public, consider alternatives and analyze its impacts.

Council also decided to ask the province not to proceed with plans under Bill 23, More Homes Built Faster Act, 2022 that would reduce development charges levied on builders to pay for infrastructure needed to service new development.

According to staff, the city stands to lose an estimated $230 million a year in development charges, community benefits charges and parkland levies if the bill is passed. That money is used to pay for growth, city staff told council on Thursday. Mayor John Tory spoke out against the measure, along with several other councilors, saying the city simply can’t afford to lose $230 million in revenue a year, and that the bill would gut the city’s affordable housing programs.

“They’re taking money that otherwise would have come to us to pay for growth, and leaving it in the hands of the developers and leaving us with the bill for all of the infrastructure and other things that have to be done to facilitate growth and build complete strong communities. That’s what’s going on here,” Tory said.

Tory said the bill needs to be amended to preserve existing city policies that facilitate “responsible growth.” The mayor said the discussions are continuing with the province about the bill, but council needs to speak with one voice about its concerns.

City staff said their concerns about the bill are “wide-ranging” because it proposes major changes to the planning and development system under which municipalities in Ontario work. Staff warned council that the revenue it stands to lose currently pays for sewers, sidewalks and streets that service new homes.

According to the Ontario government, the bill would create a foundation upon which 1.5 million homes can be built over the next 10 years.

In an Oct. 25 news release, Steve Clark, Ontario minister of municipal affairs and housing, said: “Our government is following through on our commitment to Ontarians by cutting delays and red tape to get more homes built faster.”

The bill has not yet passed third reading in the Ontario legislature.

But Gregg Lintern, chief planner for the city, said the bill will hurt Toronto’s housing affordability and will work against its goal of creating more homes.

“This bill touches on so many aspects of how the city grows. It is concerning that it appears to be taking us in some directions … which are counter to the many efforts of the city council over the last several years.”

The city staff report on the issue says: “There is nothing in the bill compelling a developer to advance an approval to construction or to pass forward any cost savings to consumers; developers sell housing at the price that the market will bear.

“In addition, the revenue loss to the city would dramatically impact the city’s financial position and ability to provide infrastructure necessary to support the significant growth in population; as a result, the bill may have the effect of slowing housing supply, counter to Provincial objectives .”

Coun. Gord Perks, who represents Ward 4, Parkdale-High Park, slammed the province for creating a bill that will hurt housing affordability. Staff told Perks that the city’s homeless shelter system is “stretched” and more pressure is “not sustainable” for the city. Staff also said about 30,000 households in Toronto are three months or more in rental arrears.

“In a number of very specific ways, Bill 23 runs the risk of increasing the number of homeless people in the city of Toronto. What housing plan makes people homeless?”

“As the regulations stand today, we can’t support them. We do want to build more housing. In fact, this council is laser focused on that,” Bradford said.

“But what’s been put on the table today kneecaps this city, kneecaps future generations, and it limits our ability to deliver the affordable housing that will be absolutely needed for our future success and prosperity as a city,” he added.

Coun. Ausma Malik said the bill is the latest example of provincial interference in municipal affairs. The bill would make living downtown even more out of reach, the councilor for Ward 10, Spadina-Fort York added.

“It is imperative that this city council stands up to the province for the rights of this city and the rights of our democratic institutions. Council must be united in defense of Toronto.”