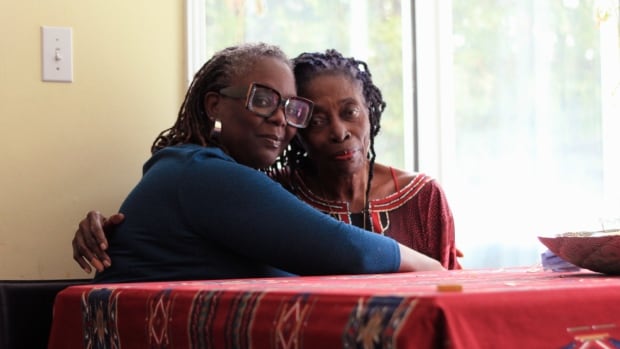 A second application, a $100 fee and more than two years later, an Ottawa woman who demanded to know why her 79-year-old mother’s visa application fell through the cracks says the family’s wait is finally over.

Charlotte Clarke told CBC News this July her family was exhausted from wondering why her mother, Victoria, was left waiting so long for a visa that others were getting within weeks.

Now, she’s finally arrived in Canada for her long-sought visit to see her grandchildren.

“It just seemed unreal to me,” Charlotte Clarke said, reflecting back on the journey. “It was infuriating.”

Clarke had helped her mother, who lives in the western African country of Gambia, apply for a temporary visa in October 2020 with Immigration, Refugees and Citizenship Canada (IRCC), the federal department that processes immigration applications and visas.

Clarke’s father Malcolm died of COVID-19 in August of that year. Her mother had been his main caretaker for years, and Clarke said she wanted her to take a break and visit her two children and grandchildren in Ottawa.

Earlier this month, she landed in Ottawa having finally received her visitor’s visa after reapplying this September.

This time, it took about five weeks for IRCC to process their second application from start to finish.

“We were overjoyed, obviously, and everybody was happy for her because two years is a long time,” Clarke said.

“I feel good … But the journey to be with her was not exactly a pleasant one,” Victoria Clarke said, looking at Charlotte from the kitchen table in her Ottawa home.

In response to the Clarke family’s story, IRCC had told CBC some applicants can reapply for their visas, especially if they had not received a response yet and applied before Sept. 7, 2021 — the date the Canadian government finally opened its borders to fully vaccinated travellers.

Since publishing their story, CBC has heard from dozens of others who’ve also waited years for their family members’ visas from around the world. They’ve wondered if reapplying was the best route, as they’d be throwing away time and money and starting from scratch.

Said Izawi, who lives in Montreal, is one of them.

He said he passed his “second anniversary” of waiting for his parents’ super visa last Sunday, after helping them apply to come from Syria on Nov. 20, 2020.

It has no logic behind it whatsoever. Like why?– Said Izawi

Izawi said his family is “baffled” by IRCC’s suggestion that applicants reapply.

“It has no logic behind it whatsoever. Like, why?” he said. “It doesn’t make sense … why somebody would need to do that. What about the other application?”

IRCC charges a $100 fee per person to apply for a visa. The medical insurance Izawi bought for his parents — a requirement for a super visa — cost about $4,000 and has since expired.

“It’s money being flushed down the drain,” Izawi said. “It’s an application that I’ve been waiting on two years — I’m going to have to kill it now and start a new one? And only God knows how long it will take.”

IRCC did not give a direct answer to CBC’s question about the now-expired medical insurance, saying the family’s application has been in the “background checks” phase since February 2021.

IRCC explains why some visas were left behind

An IRCC spokesperson explained that between March 2020 and Sept. 6, 2021, the department prioritized applications from those who were exempt from COVID-19 travel restrictions.

Visa applications submitted before Sept. 7, 2021 were placed in a “queue for non-urgent processing,” the IRCC said.

That led to the “accumulation of a large inventory of visitor visa applications,” according to the department.

IRCC began working through the backlog, but said most of those earlier applications would take longer due to their “complexity as a result of potentially outdated documents and information” and “changing circumstances.”

That’s why they are asking some people to reapply, the department said.

IRCC also said those who withdraw applications may be eligible for refunds — only if the agency hasn’t started processing them.

But its website says there is “no guarantee,” and what’s more, applicants won’t get written confirmation that they’ve been withdrawn.

“It seems unfair [for IRCC] to receive … all of these payments … [and] you’re now saying your application is null and void,” she said. “How can you conscionably keep their money?”

While Clarke said she too worried about submitting a new application, even though it worked out quickly, it didn’t come without challenges.

She warned that IRCC’s online portal isn’t intuitive and said she sought help from a family member “in tears.”

Still, Clarke has an answer for any applicants unsure about what to do.

“My advice would be to respond firstly.”