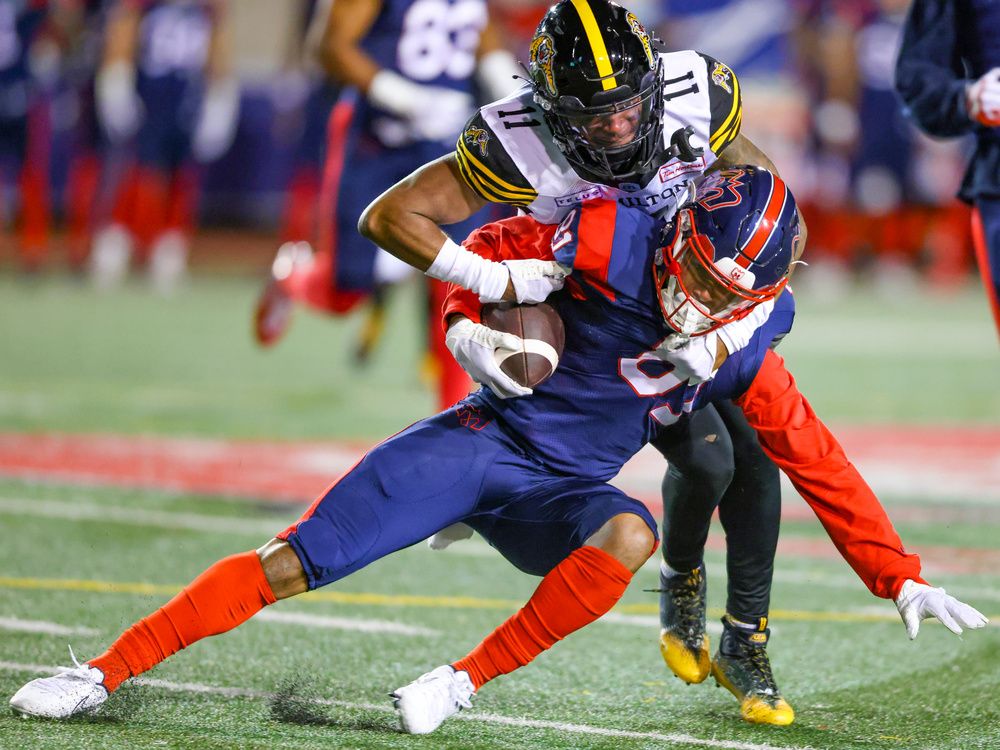 It took them three tries, but the Alouettes finally won a game following a bye week in the schedule.

Eugene Lewis scored two touchdowns, including one with less than two minutes remaining in the fourth quarter, leading Montreal to a 23-16 victory over the Hamilton Tiger-Cats on Friday night before 17.008 Molson Stadium spectators.

With Lewis’ second score, a nine-yard pass from Trevor Harris, he surpassed 1,000 yards for the second time in his career.

David Côté completed Montreal’s scoring with three field goals. It was the Alouettes’ fourth victory in their last five games, solidifying their hold on second place in the East Division and improving their record to 6-7.

The Ticats’ record dropped to 4-10, while Hamilton has lost all seven of its road games this season.

Both teams’ offenses started the game with long drives, but neither was able to convert the possessions into any points, as the first quarter ended scoreless.

But Hamilton began the second period with a nine-play, 86-yard touchdown drive that included a 38-yard pass to Tim White, who beat cornerback Nafees Lyon on the play.

That put the ball on the Montreal 12-yard line. From there, tailback Hills gained eight yards on first down before scoring on a four-yard sweep at 3:51, providing the Tiger-Cats with a 7-0 lead.

The Alouettes cut into that lead on Côté’s first field goal, a 41-yarder at 9:57. A 31-yard pass from Harris to Jake Wieneke put the ball at the Ticats’ 38.

The first half ended with Small’s 32-yard field goal on the final play.

Montreal struggled offensively over the first 30 minutes, generating only eight first downs and 105 yards net offense. Harris completed nine of 14 passes for 91 yards, but was being outplayed by Dane Evans, who was good on 14 of 16 attempts for 163 yards.

The third quarter was slightly more wide open, and the scoring started with Côté’s 51-yard field goal — the longest of his season — at 3:21, cutting the Ticats’ lead to 10-6.

But the visitors responded immediately, Small connecting with a 38-yard field goal at 4:59, restoring their seven-point lead.

Montreal then engineered a nine-play, 70-yard drive for its first touchdown. The series began with a 12-yard run by Canadian tailback Jeshrun Antwi, along with an 11-yard pass to Lewis and a 20-yarder to Wieneke, who has struggled to produce this season.

But following a 10-yard pass to Lewis, taking the ball to the Hamilton 5, the game was delayed approximately 15 minutes following what appeared to be a serious neck injury to cornerback Rodney Randle Jr. The former Alouette was eventually removed from the field on a stretcher and transported to hospital.

Two plays following the interruption, Harris connected with Lewis in the corner of the end zone for the touchdown. But the snap was high on the convert and Côté’s kick struck the upright, leaving Montreal trailing 13-12 heading into the final quarter.

The Alouettes produced an impressive drive as the third period ended, driving to the Hamilton 4. But the first-down pass to Hergy Mayala was incomplete. Harris’ pass struck the crossbar on second down and Montreal had to settle for Côté’s 12-yard field goal at 44 seconds, provided the Als with their first lead, 15-13.

The Ticats regained the lead on Small’s nine-yard field goal at 10:56, although Montreal did a good job of keeping Hamilton out of the end zone.

Following a four-game homestand, the Alouettes finally play a road game next Saturday at Edmonton.