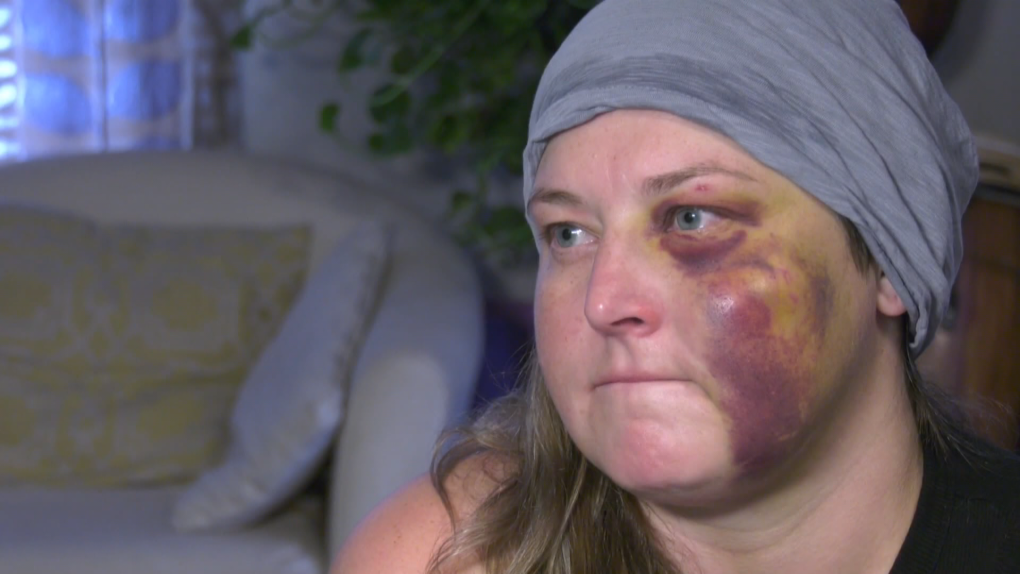 Another Edmontonian has come forward to express frustration and sadness about the lack of safety in and around the city’s transit centres. She’s also calling for more officers on the ground.

Last Thursday, Rob Nicholl went public about a beating he suffered at the Southgate LRT station. He said there was no security or police around to help him.

On Monday, Janelle Dyke opened up about an attack she suffered last Tuesday afternoon outside MacEwan Station in downtown Edmonton.

“Nothing’s broken, but obviously, it’s very bruised. They did a CAT scan when I went to the hospital and I have a mild concussion,” she said, showing a bruise down nearly half of her face.

Dyke was just getting off of work when she was approached by two women coming from the direction of the train station. She recalls being asked for money and offering some.

Then, she says, one of the women hit her twice in the head. The other woman doused her with either pepper or bear spray.

“It was like point blank with whatever spray it was, right in my eyeballs, which got all over my clothing too. So as I’m wiping my eyes throughout the course of this, it was just spreading and getting even worse,” Dyke said.

Her phone is missing along with the cash she had.

And while Edmonton Police Service confirmed officers are investigating, Dyke wants the city to do more by assigning armed police to patrol in and around LRT stations.

“There most definitely needs to be police force within there, and even going on the trains more.”

A spokesperson for Edmonton Police Service said the force “shares concerns about crime and disorder in the transit system” and that regular patrols are already being done.

“EPS is committed to using the resources available to address both proactive and emergent situations on transit and safety remains the EPS’ number one priority,” Carolin Maran wrote in a statement to CTV News Edmonton.

In April, Mayor Amarjeet Sohi announced that 21 new transit police officers would be hired and that the city is also adding more community outreach transit teams which specialize in mental health, addictions and housing.

In October, the province announced $187 million over two years to be spent on addiction services and housing supports.